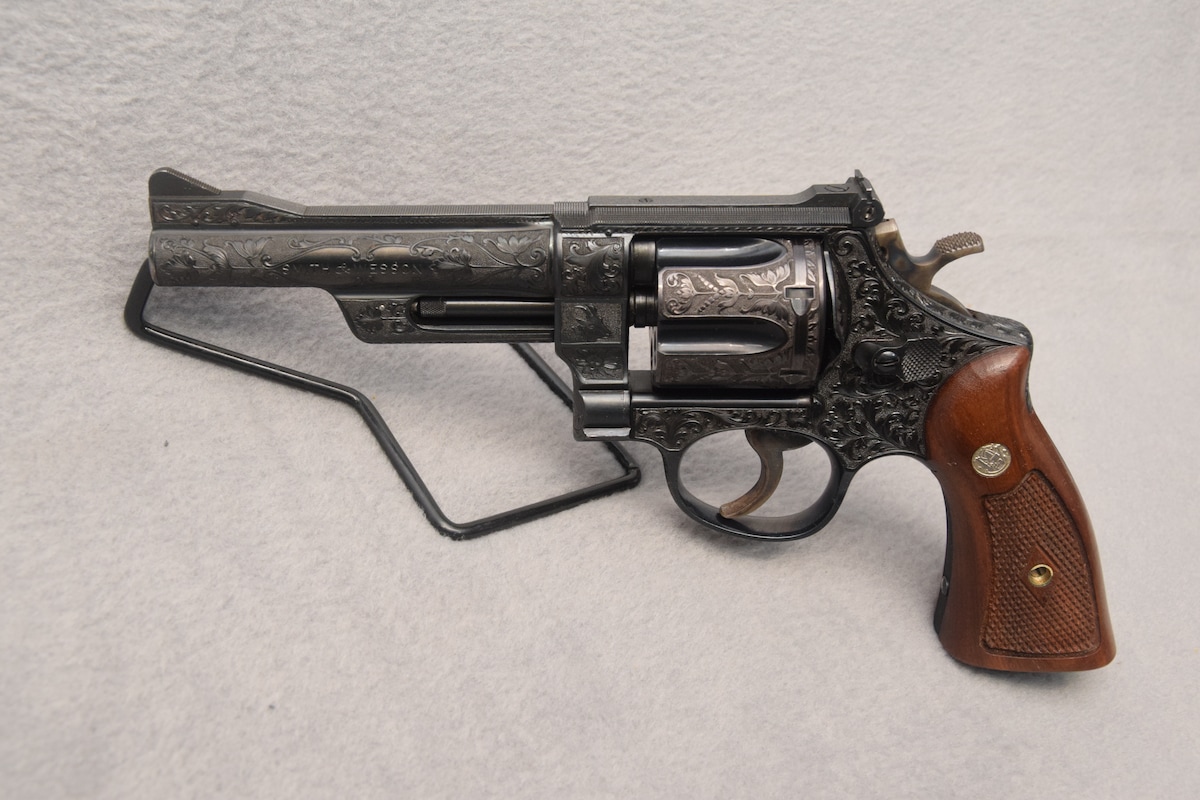 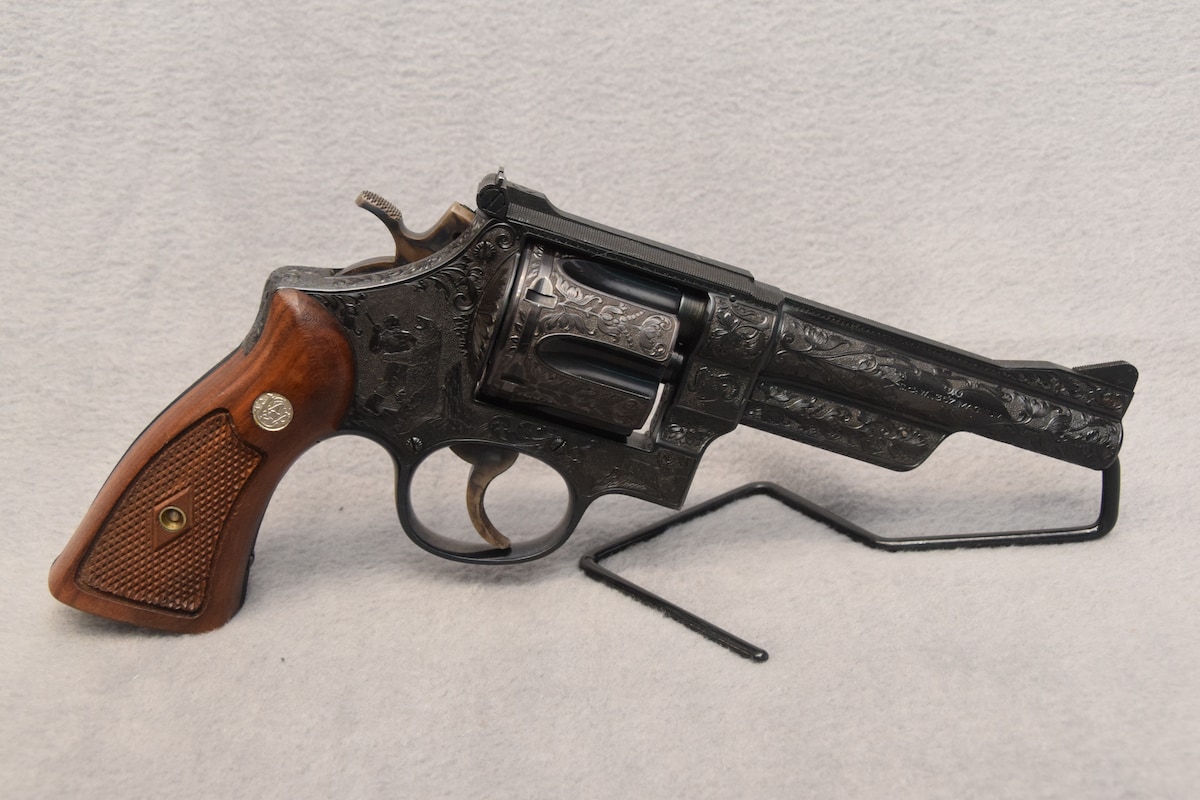 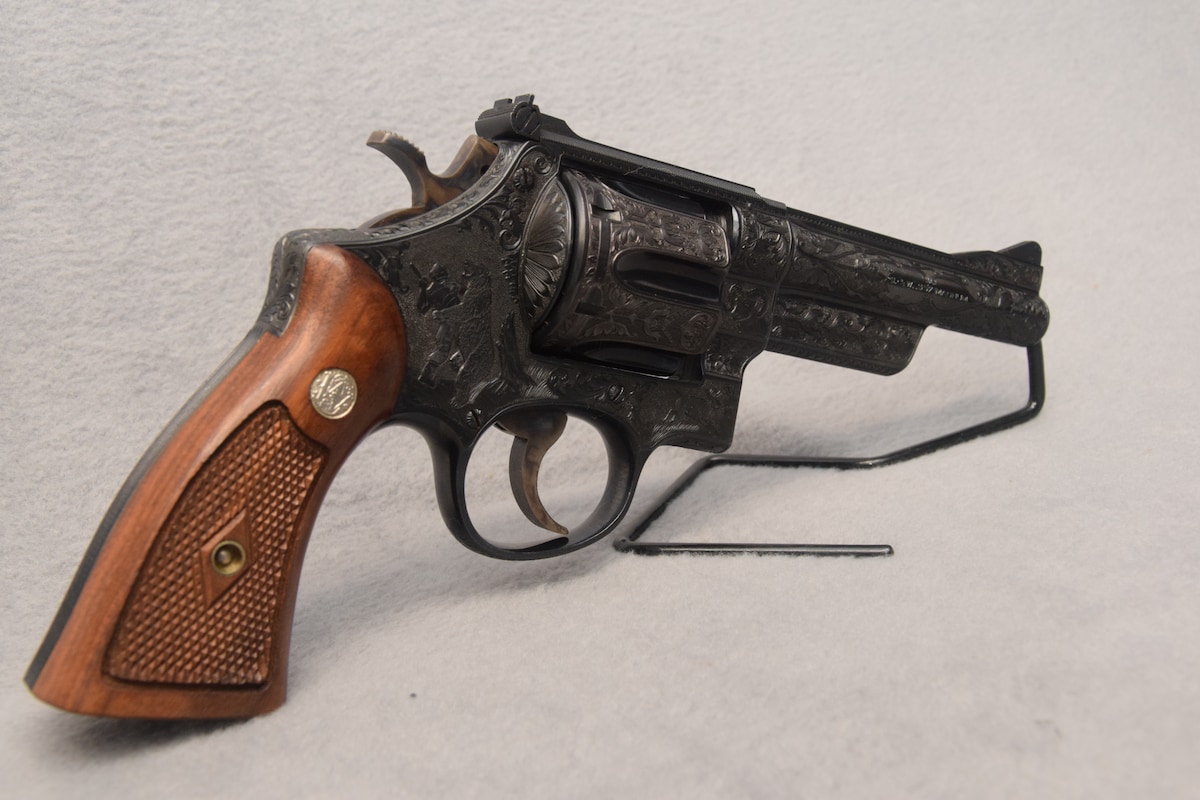 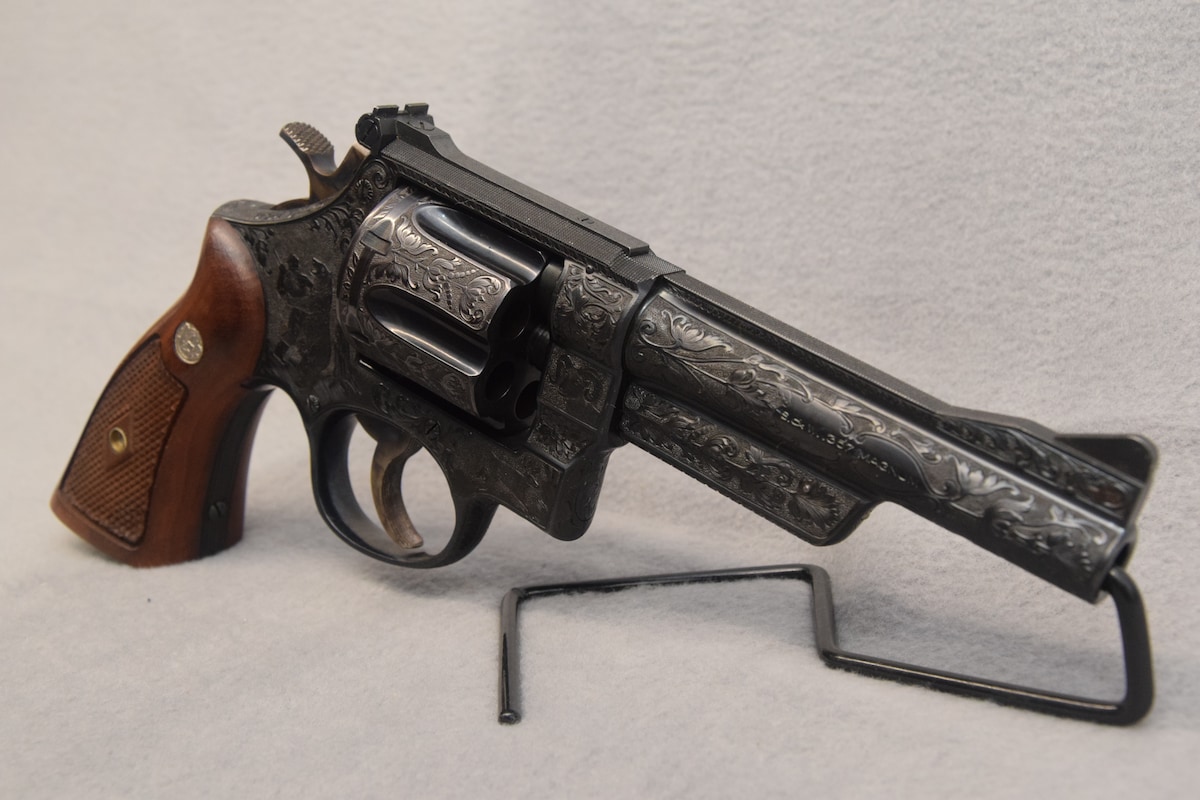 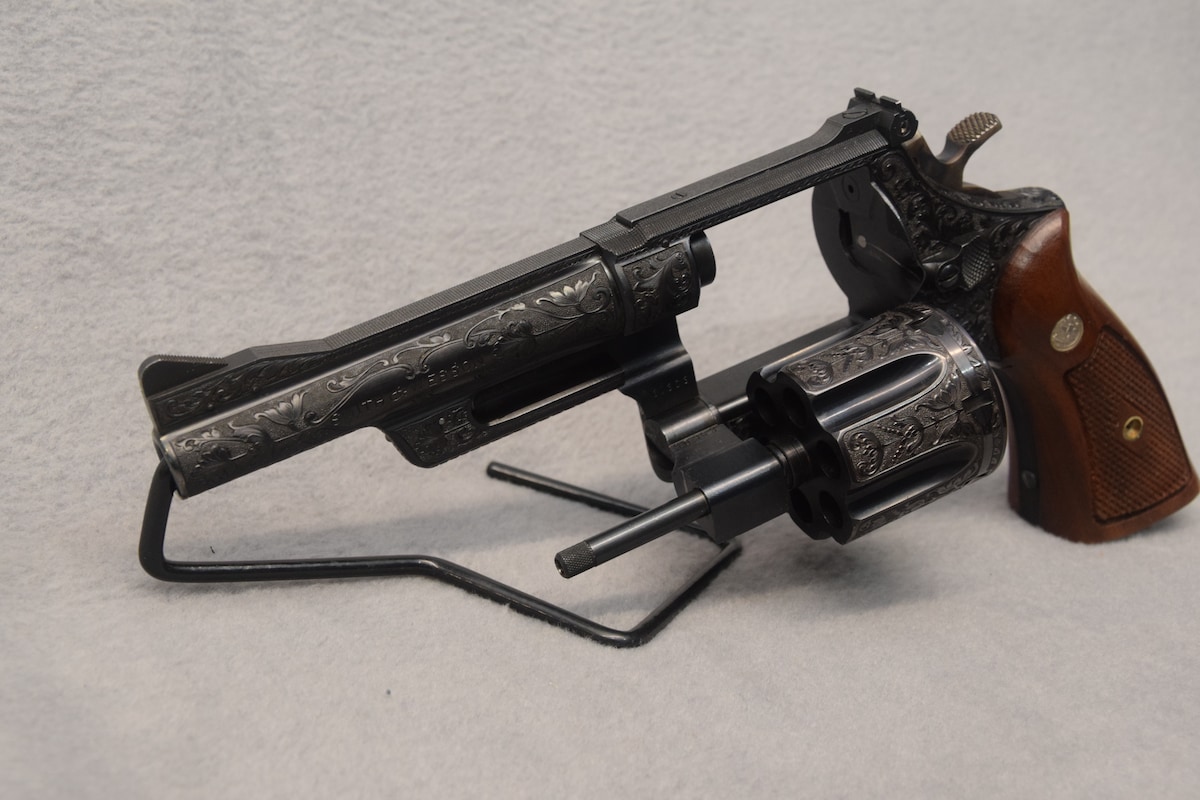 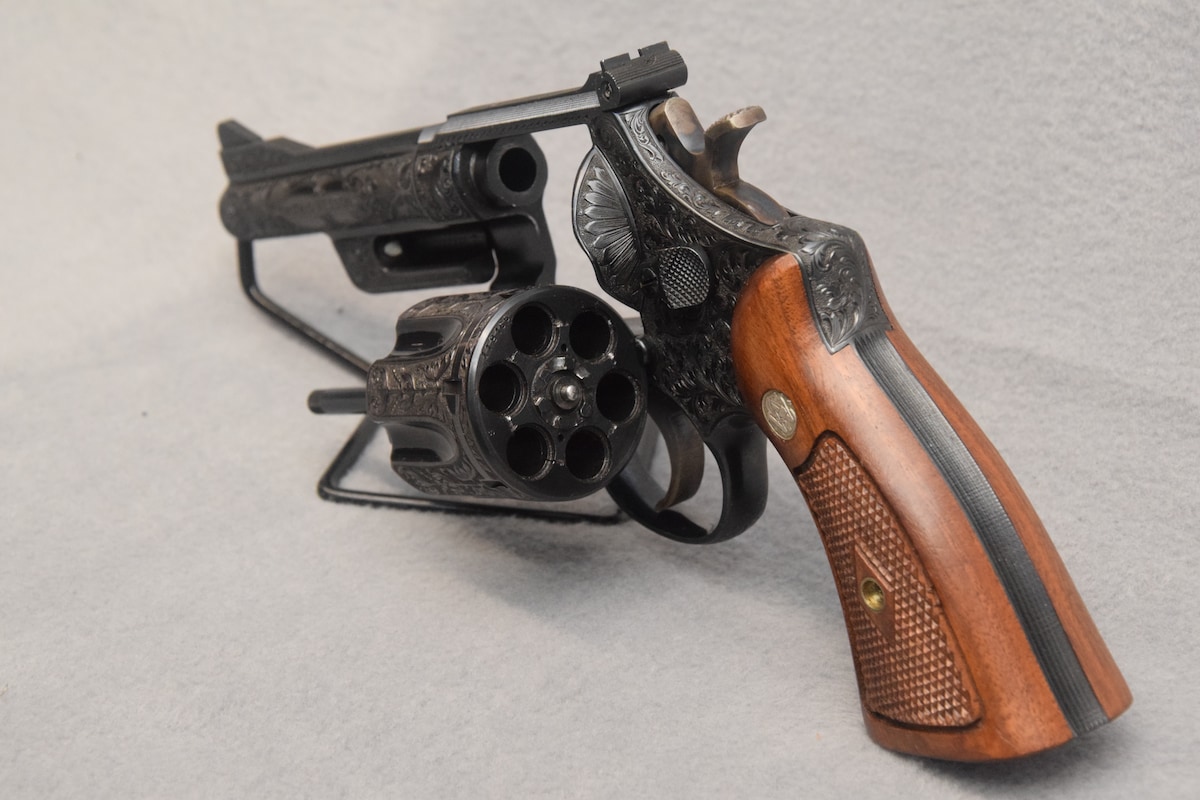 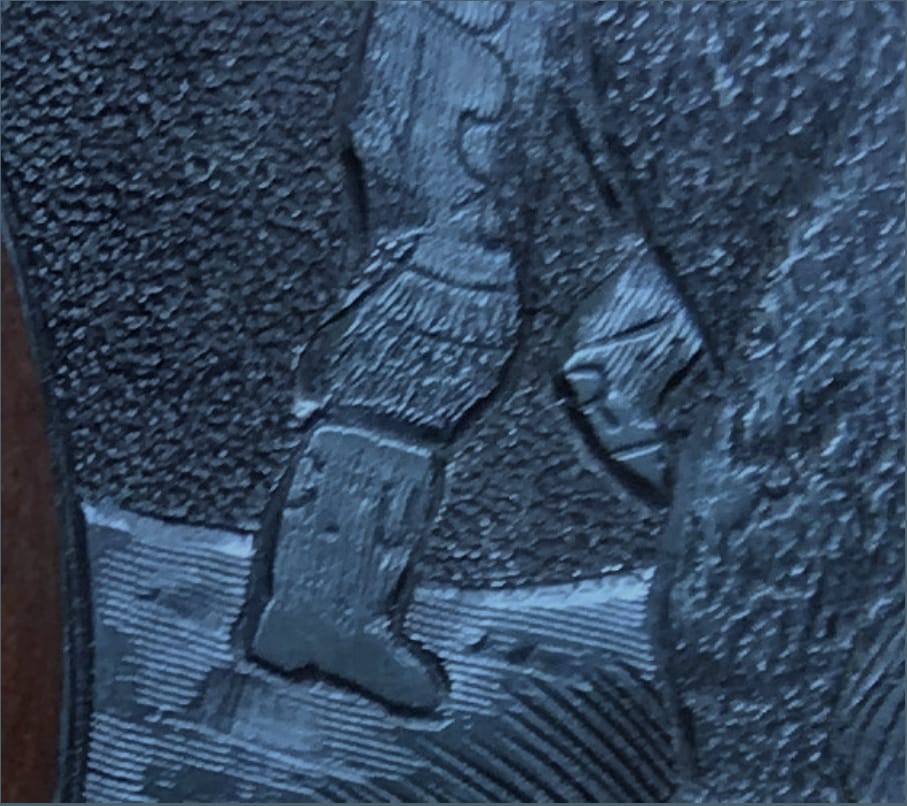 This custom engraved masterpiece is a one-of-a-kind firearm. Appraisal letter and Smith & Wesson factory letter included. Only factory fired. Made in 1954.

"Overall Condition: Your near Mint Smith & Wesson 357 Magnum pre model 27, with S-prefix Serial Number, build on a 5 screw N-frame variation, comes with a 5” barrel and is heavily engraved.
A factory letter accompanies this incredible engraved Revolver, confirming its early history when
shipped on September 30, 1954. The factory letter says the revolver shipped with a 5” barrel with
a ramp front sight, Blued finish, and checkered walnut grips. The heavy Master engraving came
after the gun was sold. At the time of this appraisal the engraver is unknown by this Appraiser
and could change the market value in the future if found that the engraver was someone famous.
The gun maybe giving us some clues to who the engraver is. On the right rear of the receiver
there is a wonderful engraved fight scene with a man and a bear. On the legs of the man it looks
like what I think is the engravers initials. You can see
what looks like a “GU” on the right boot of the man
and a “R” on the left boot. Unfortunately, we could
not match it up with any known engraver. It was said
that one of the previous owners was a military man
and the gun might have been engraved in Germany,
but that is only hear say at this time.
The Revolver itself is in near mint condition except
for some faint cylinder drag. The engraving is
wonderful and certainly done by a Master engraver." - Appraisal Letter

When first introduced by Smith & Wesson in 1935, it was known as the Registered Magnum. The model was essentially a custom-order revolver. Barrel lengths could be had in one-quarter-inch (6.4 mm) increments from 3 1⁄2 to 8 3⁄4 inches (8.9 to 22.2 cm) inches in length. In addition to the different lengths of barrels available, there were different grips, front sights, triggers, hammers, and finishes available. Each Registered Magnum came with a certificate of authenticity.

If your favorite past time is spending a day at the range, you're sure to love Guns.com's selection of firearms. Whether you're a competition shooter or just like to make steel sing, we're sure to offer a gun that you'll love to shoot.