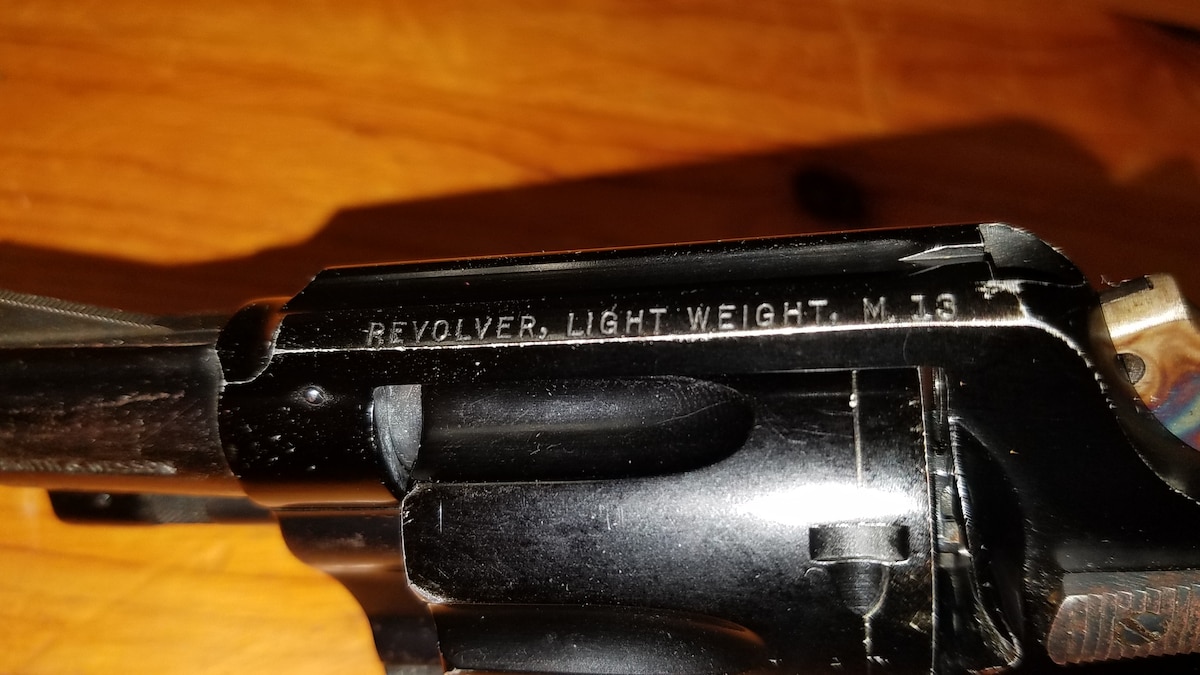 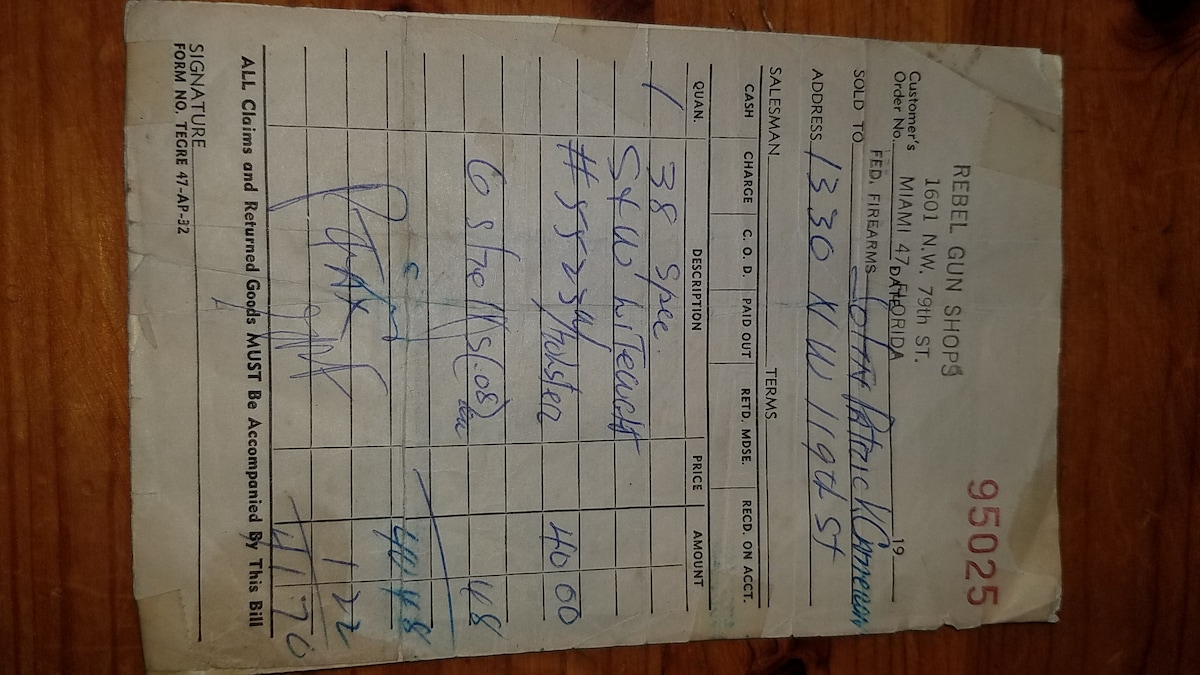 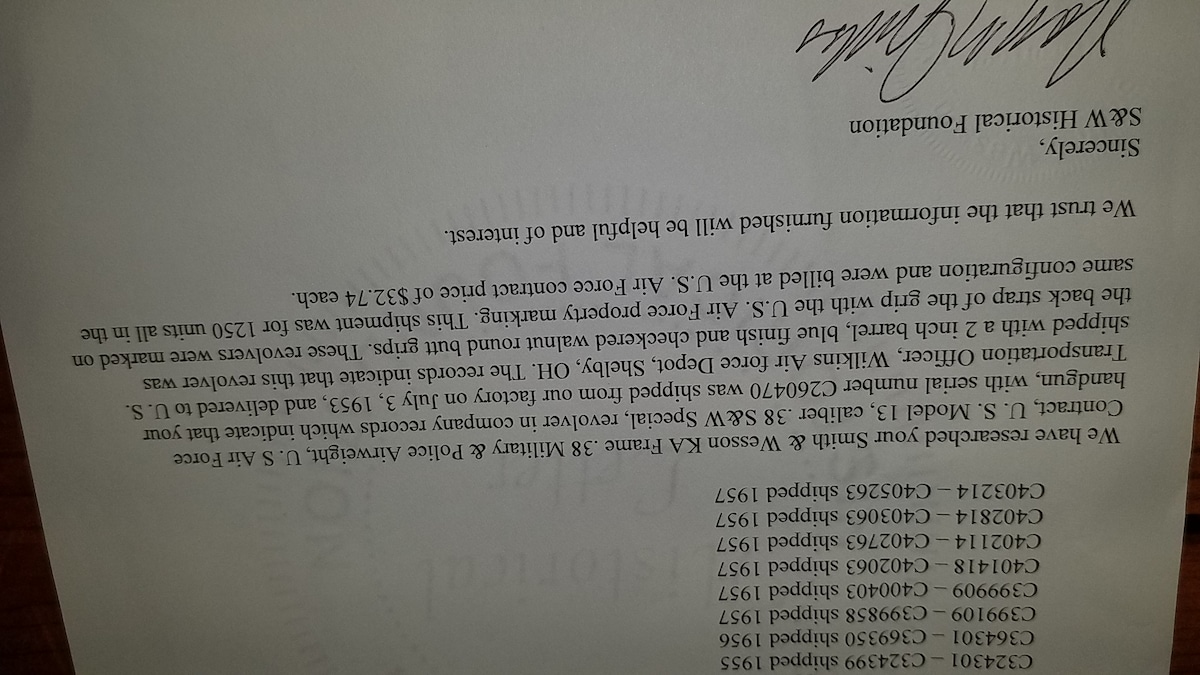 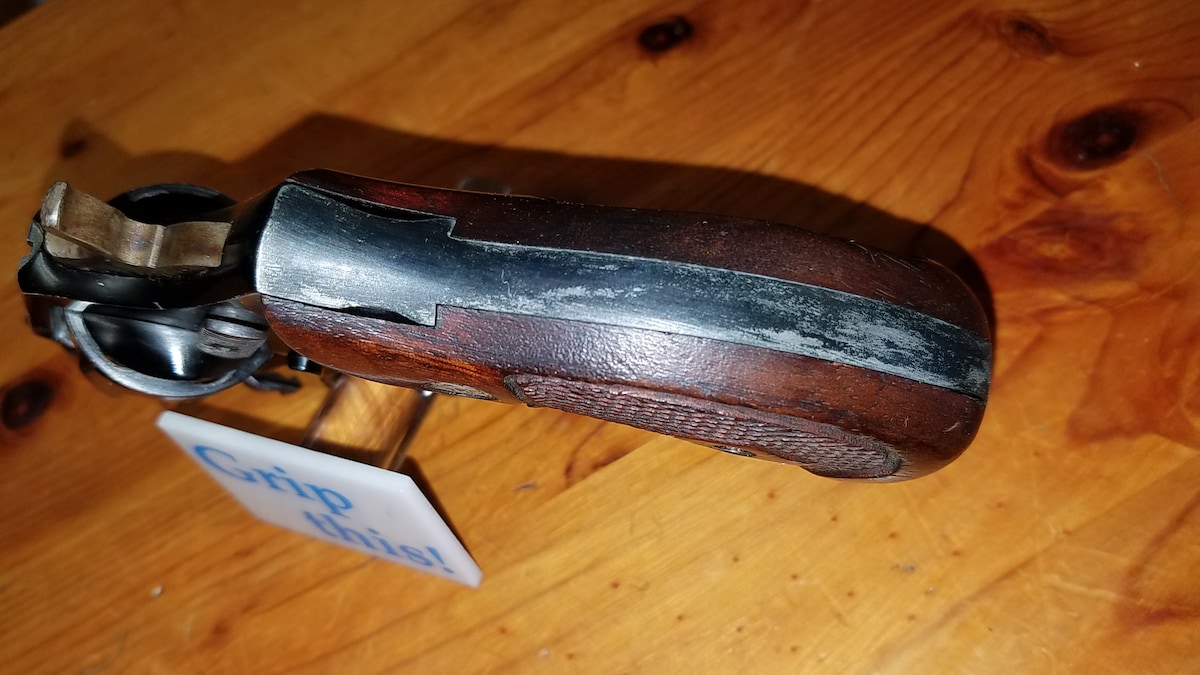 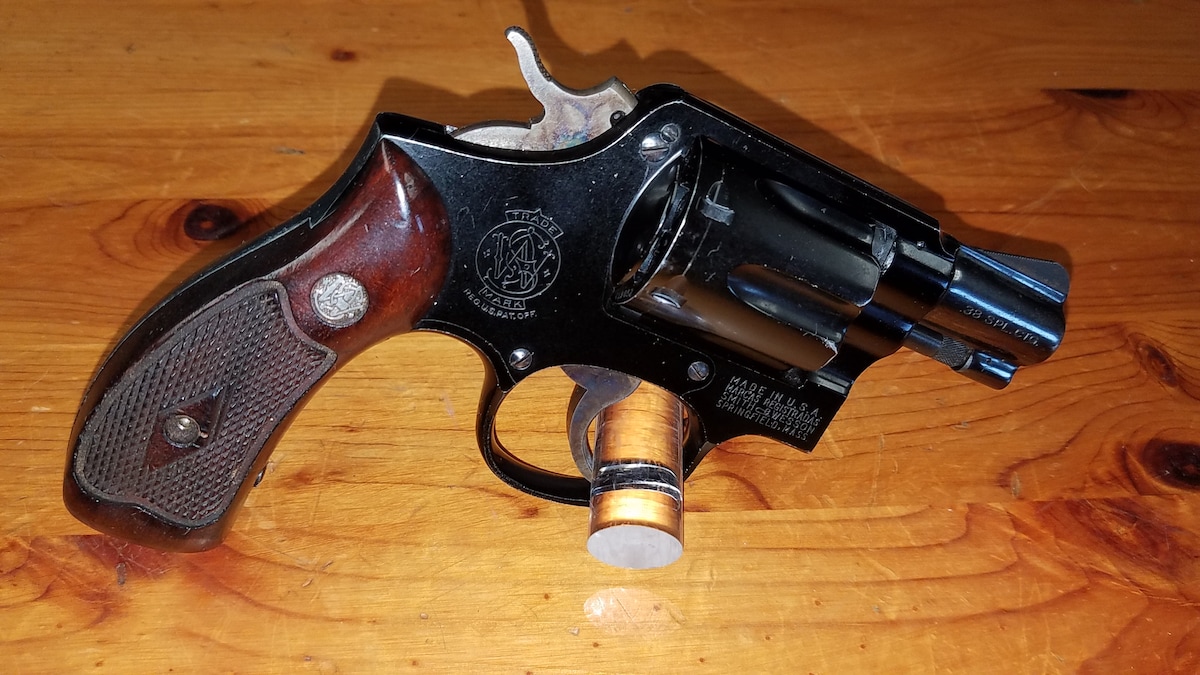 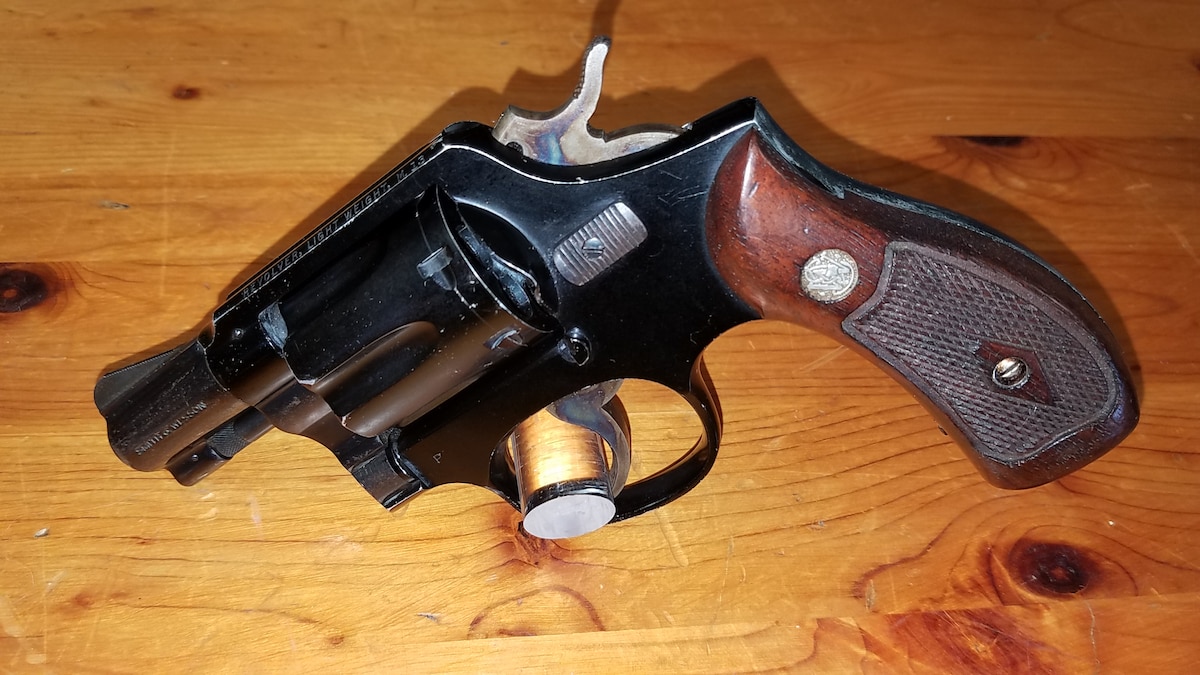 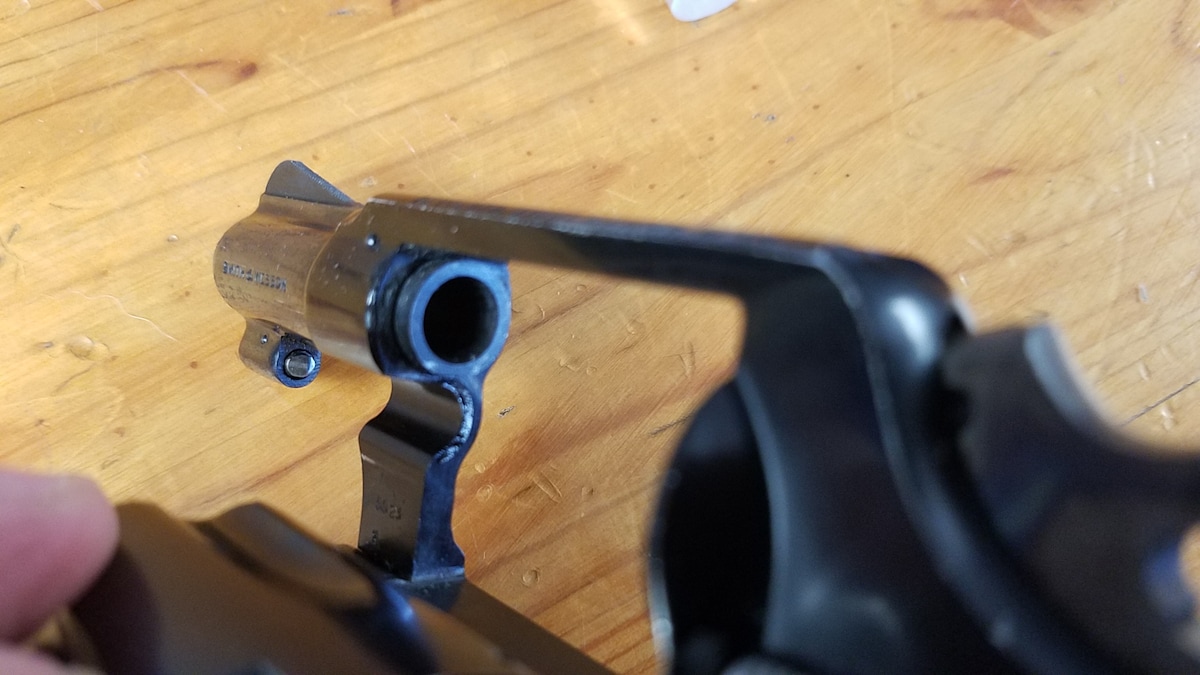 
Smith & Wesson Model M13 U.S. Air Force Aircrewman 6 shot .38 Special
History :
The U.S. Air Force called this revolver the model 13 Aircrewman, it was one of the first .38 Military and Police air weights and were produced from 1953 to 1954.
In April, 1953, Smith & Wesson revolvers that were purchased for the U.S. Air Force we're standardized and marked REVOLVER, LIGHTWEIGHT, M13 on the top strap, and the designated backstrap marking were Property OF US Air Force, ****** these back strap marking have been removed at some point in its life.
The majority of these air force model 13 handguns were destroyed by the government.

How did we get it and how is it for sale :

This revolver ended up in Florida, as the sellers family lived in Miami in the mid 1950's, came from an estate in our local area, the seller contacted us to sell it on consignment.

We have an original undated sales receipt, where this M13 revolver was purchased from Rebel Gun Shop in Miami, FL for $40.00, shows the crane lot number on the receipt as the serial number, this is a mistake usually by lazy or unknowing gun shop employees who didn't know the serial number was on the butt of the revolver. Dating this and making the connection , The gun shop address in Miami, used a code of 47 as the identifier, long before the post office started using zip codes in the 1950's. Thru some research we found out that Homestead FL Air Force base was operational as a SAC base in the mid 1950's. We contacted Smith & Wesson archives in October of 2019 and receive the official Smith & Wesson Archive letter for this handgun which states it was shipped from the factory on July 3, 1953 to U.S. Transportation officer, in Wilkins Air Force Depot in Shelby OH. So more than likely the gun made its way to Homestead Air base, then to the gun Shop in Miami area.

in 1959 the U.S. Air Force ordered these destroyed due to cracks in the cylinders, some survived......

The included S&W letter warns of the unserviceability of these M13 revolvers and recommends that these NOT be fired. The letter also notes that some were used to make fake copies of the M13. We can not guarantee any more than the info stated above, and why we contacted S&W for the actual letter to verify this revolvers path in history.

The system only allows for 7 pictures. We have many high resolution pics of this revolver and the scans of the original sales receipt, and the S&W Archive letter signed by Roy Jinks Historian. Please email us for a link from google drive for these items. gunstockandbarrel@gmail.com

Whether you're spending a day at the range, carrying for self-defense or shooting for sport Guns.com has your back, providing women with options that are ergonomically suited for and preferred by female shooters.