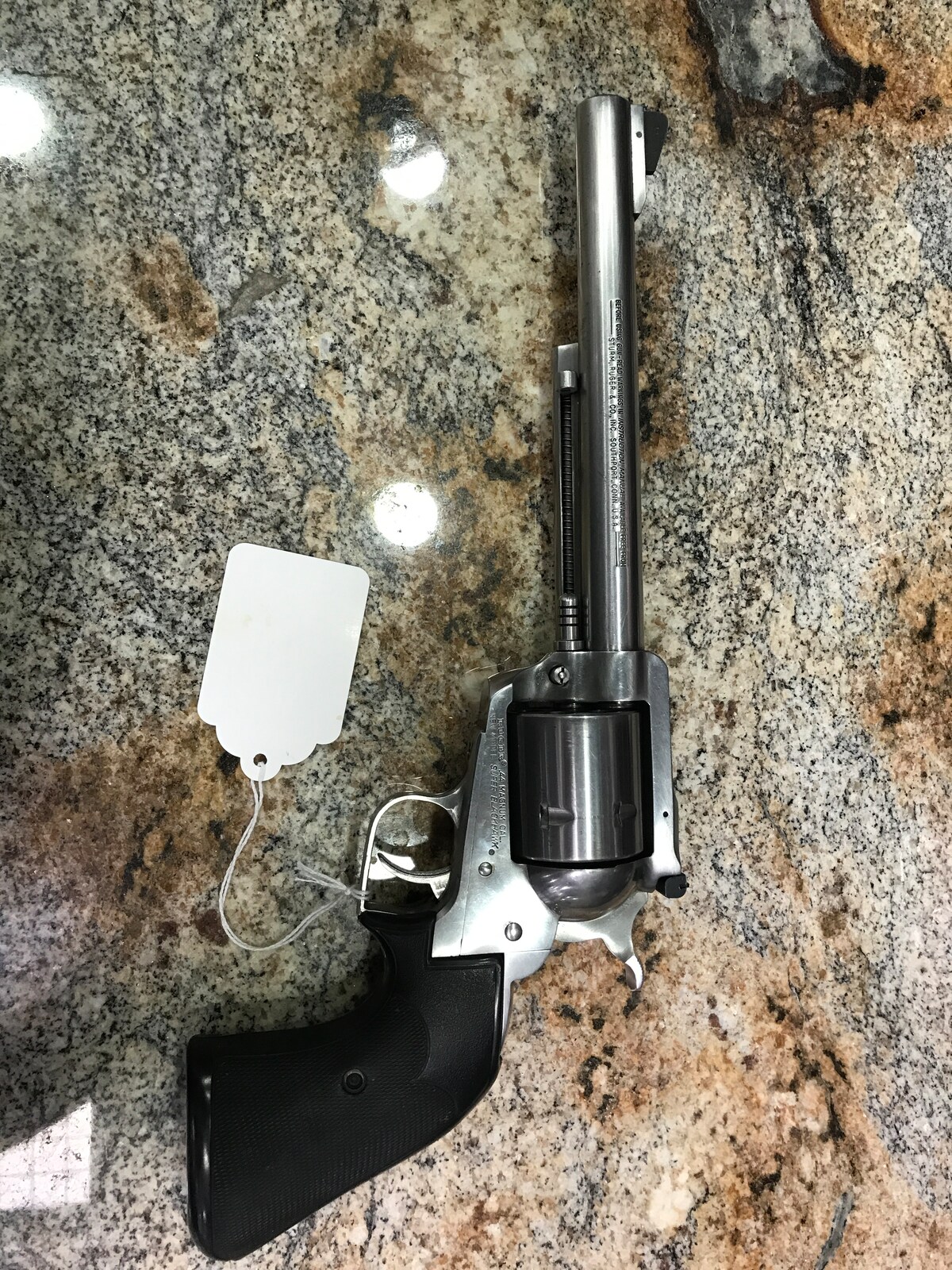 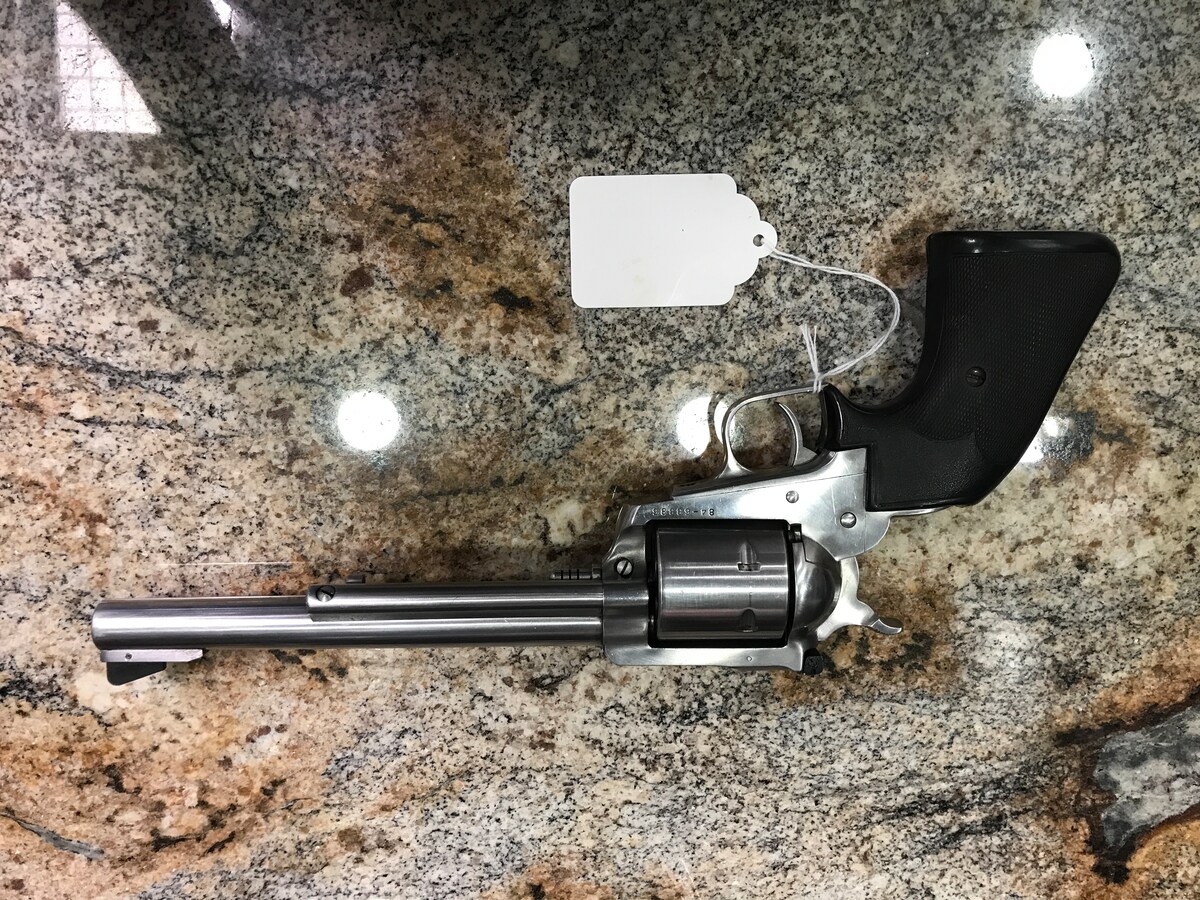 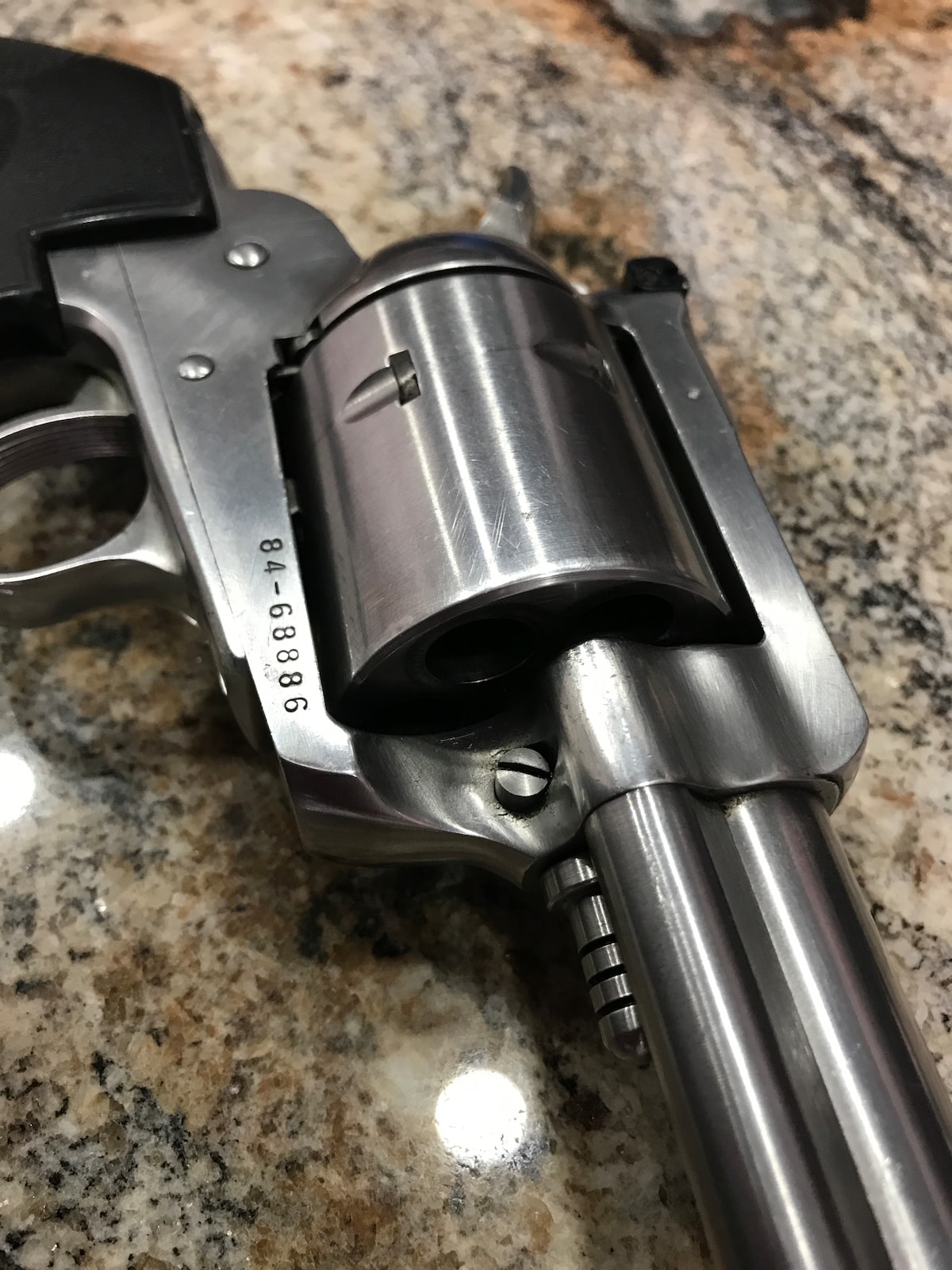 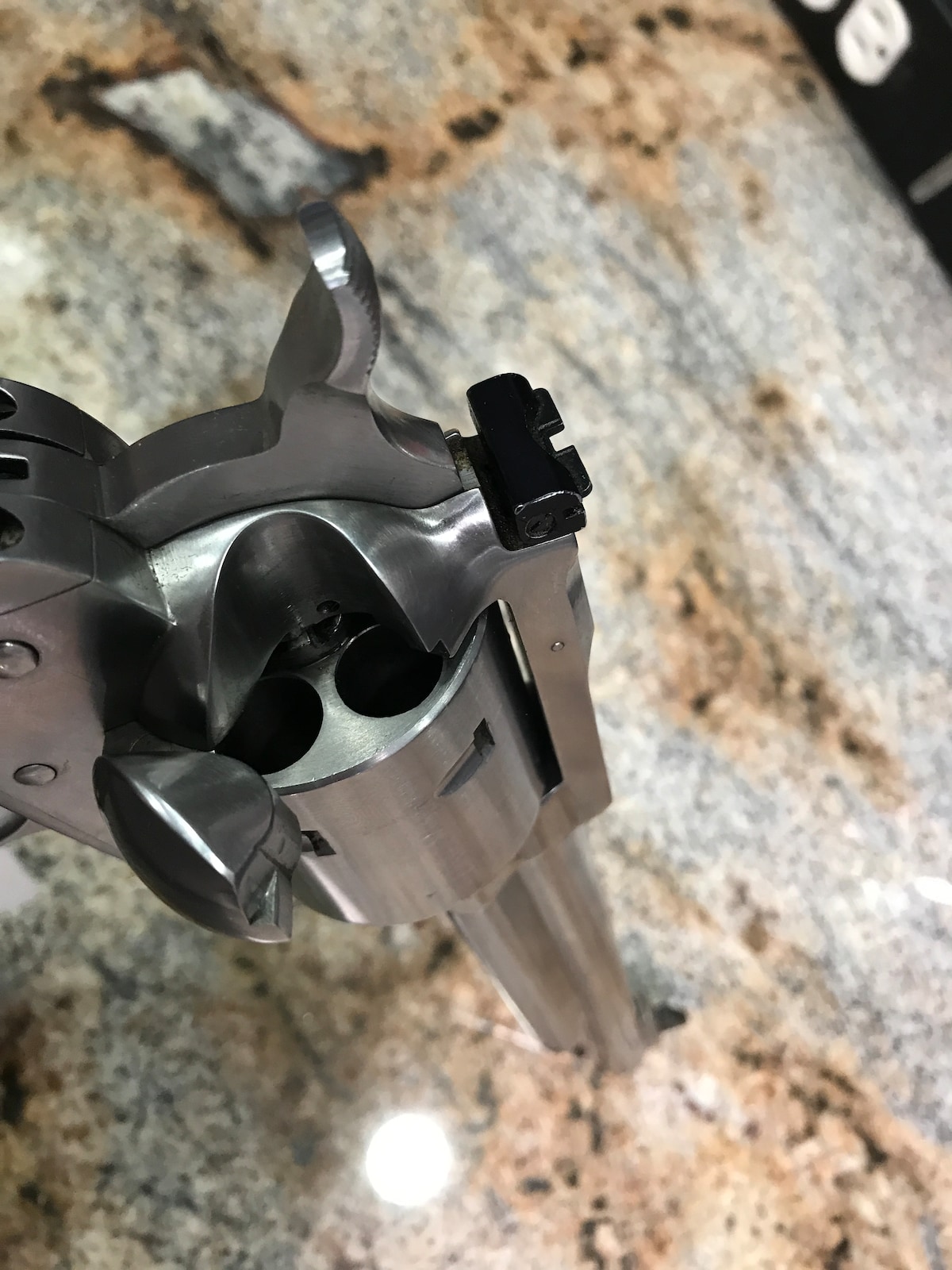 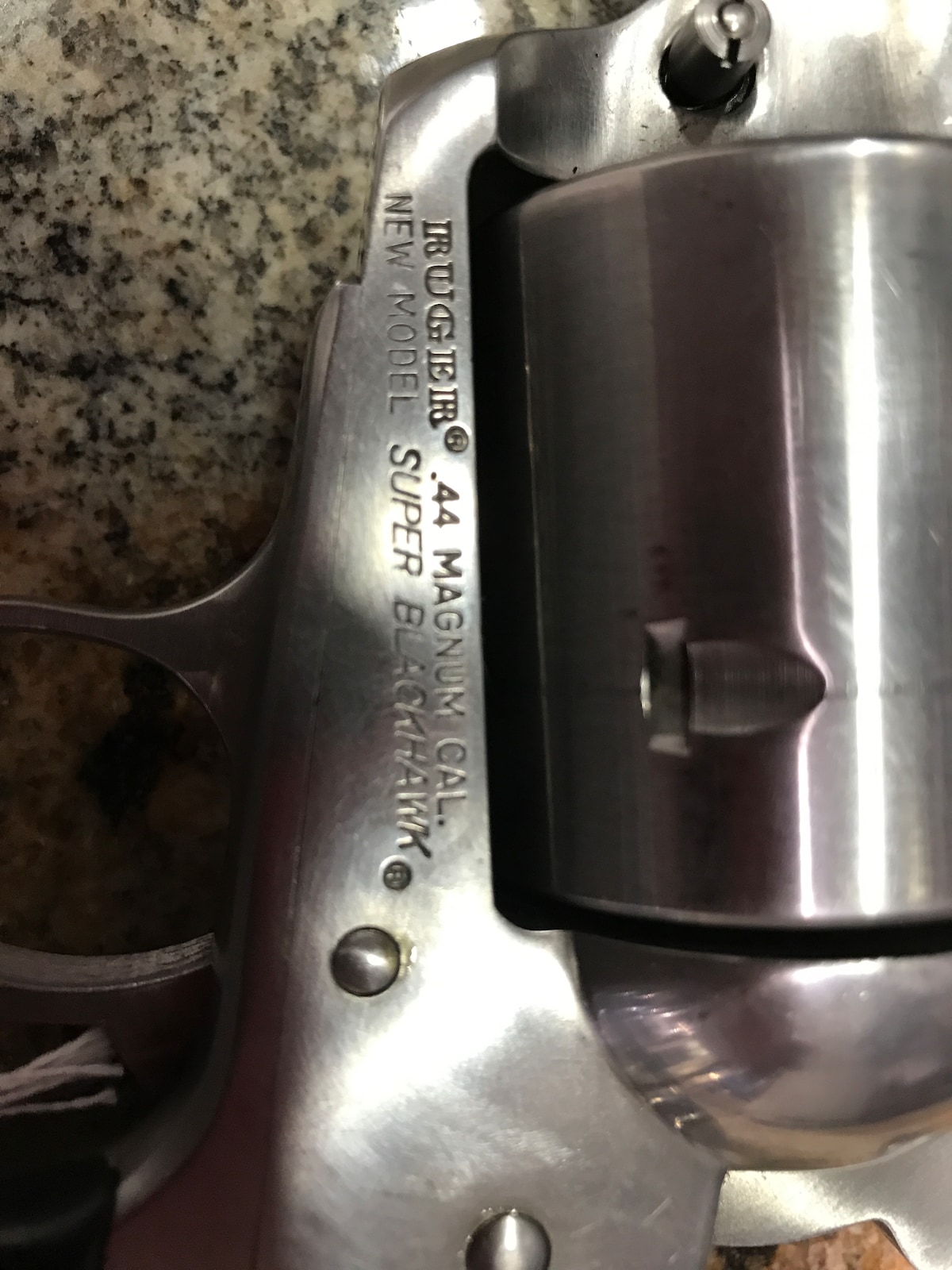 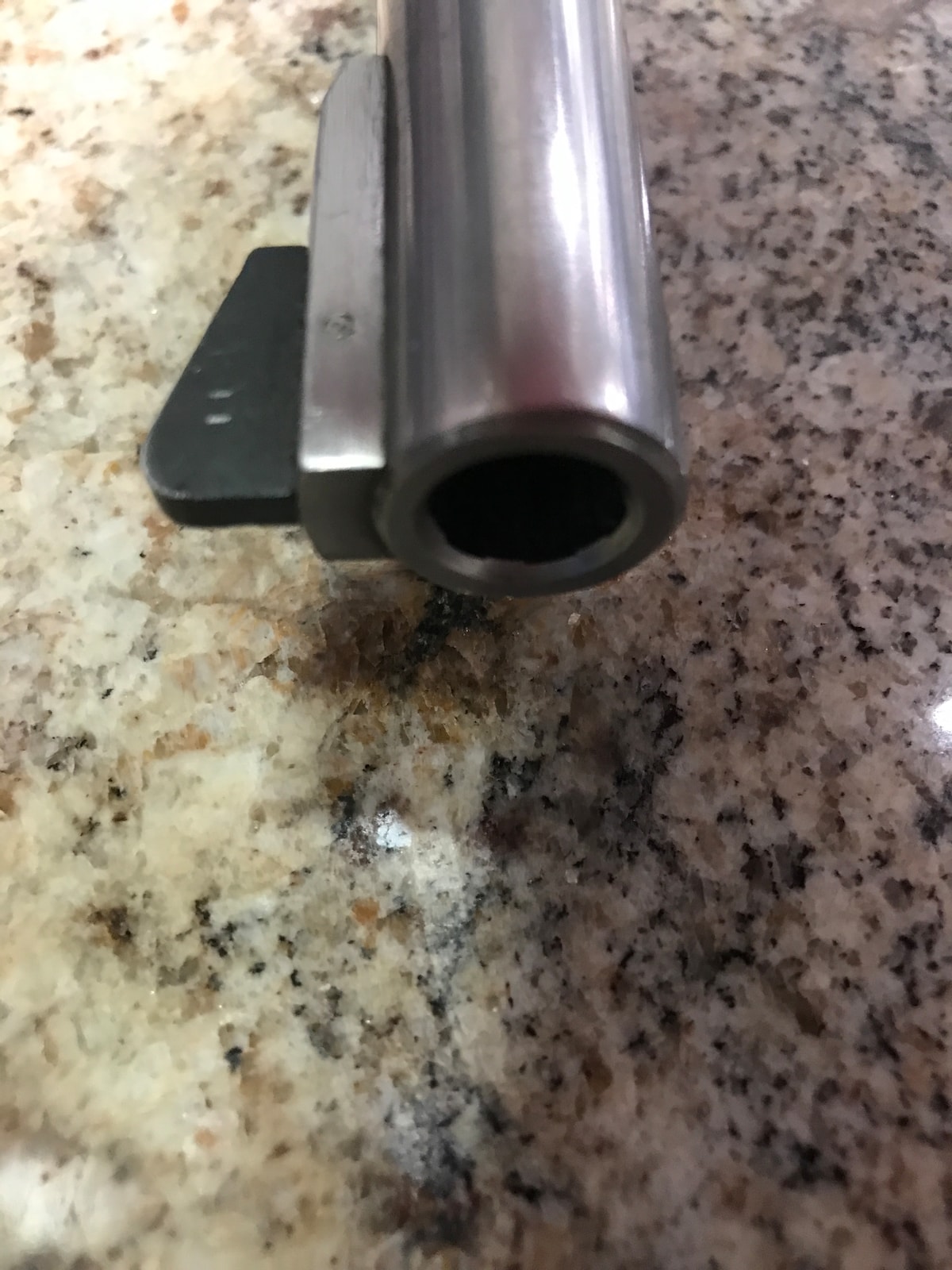 For sale is a Ruger New Model Super Blackhawk used in good shape.

n the early 1950s, Westerns were popular in movies and television. Colt had discontinued the iconic Single Action Army prior to World War II, and few single-action revolvers were available to meet market demand for cowboy-style revolvers. In 1953, the new firm of Sturm, Ruger & Company introduced the Single-Six, a .22 LR rimfire single-action revolver. The Single-Six proved to be a popular seller, leading Ruger to develop and market a centerfire revolver similar to the Single Action Army: the Ruger Blackhawk. The Ruger Blackhawk was named after the Stutz Blackhawk automobile. [6][7]

The 1955–1962 Blackhawks are known today as the "Flattop" models, because their adjustable rear sights were not protected by "ears" extending up from the frame as later became standard. From 1962 through 1972, Ruger made the "Three Screw" Blackhawk in various calibers, so called by the number of screws visible on the side of the revolver.

The early models of the Blackhawk still operated the same way as the Colt, in that the hammer was half-cocked to load and unload and that the firearm was not safe to carry with all six chambers loaded due to the hammer resting upon the sixth chamber.[10] In 1973, in order to eliminate accidents occurring from the hammer jarring against a round loaded in the sixth chamber, Ruger introduced the New Model Blackhawk. The New Model Blackhawk did not require the hammer to be half-cocked for loading and unloading, and it employed a transfer bar mechanism which prevented the cartridge under the hammer from being fired without the trigger being pulled. The New Blackhawk was seen as limiting firearms accidents and legal liability. Ruger then began offering a retrofit program, offering free transfer bar conversions to earlier variants of the Blackhawk.

These facts make the Ruger Super Blackhawk one of the top choices for handgun hunting. It is capable of reliably taking down deer, elk, caribou, moose, lion, grizzly or brown bear and even cape buffalo.[12] It is commonly used to deliver a coup de grace shot to mortally wounded large game, having the ability to dispatch even an elephant with a conscientiously placed close range shot to the head. The wide availability of .44 Magnum cases and bullets make the .44 Magnum chambering far more practical than .454 Casull or .480 Ruger, while allowing for similar ballistics in custom loadings.[13]

The Ruger Super Blackhawk in .44 Magnum is one of the most accurate big bore pistols for target shooting, typically returning 5 shot groups that are one ragged hole from a rest at 25 yards. Work is commonly performed on the action of these revolvers to give a light, crisp trigger pull, thereby contributing to accuracy.[14]

Get ready for your next hunting trip with Guns.com. Shop our curated selection of decoys, feeders, game calls, hunting scents and repellents. Whether you're sport is big game, small game, or prey - we have you covered!