Without rival, it is the most infamous, pervasive and lethal firearm in the world.

The brainchild of a young Soviet poet turned soldier, the Automatic Kalashnikov Model 1947 or, under its more readily recognizable moniker the AK-47, represents the progenitor of the most widely disseminated family of firearms in the world. Cheap to produce, simple to use and reliable across the entire spectrum of earthly battlefields, the device has come to underline with a much thicker pen the equalizing power of firearms—a device that allows ordinary men to kill each other without extensive training or complications. Truly the gun’s innovation in modern firearms design is only eclipsed by its grisly impact on modern warfare.

In the hands of Soviets, it was used to stonily silence anticommunist movements in Eastern Europe and throughout their empire. Countries from China to Bulgaria have copied its fabled design, flooding the world market with cheap and deadly automatic rifles.  In the 60s and 70s the Viet Cong used these rifles on American troops—soldiers who would sometimes swap their early, finicky M16s for tough and dependable AKs. Osama bin Laden cradled an AK in his first taped message after the attacks of September 11, 2001. Today, the most common way for American soldiers to die on the battlefields of Afghanistan and Iraq is under the thunder of a Kalashnikov. Guns.

The rifle’s creator once proclaimed his life motto to be, “Anything that is complex is not useful and anything that is useful is simple.”  Hardly could Mikhail Kalashnikov have foreseen that the gun he “created… primarily to safeguard our motherland” would have played such a prominent role in the history of human conflict. 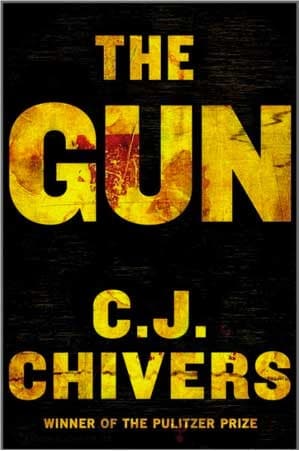 Coming to us from Pulitzer Prize-winning New York Times reporter and former Marine C. J. Chivers, The Gun submits the twisting narrative history of the AK-47 to its readers in a complex cocktail of practiced and descriptive reporting, evocative historical review and sometimes maddening social reverberations.

Chivers writes of this project, “Far too many people regard the study of weapons as an illiberal art.  The chronicle of automatic firepower, viewed through the AK-47 and its infiltration across the world, suggests otherwise.”

The book never strays from this sentiment.  Using the AK-47 as a literary lens, Chivers unveils the most personal weapon of our lifetime to be a symbolic and political instrument, co-opted by numerous players and exacting an irrefutable influence on the dynamics of global conflict and resolution throughout the 20th and 21st centuries.  As one reviewer arrestingly put it, Clivers investigation of the AK-47 “is not merely the story of a weapon and where it came from. It is a chronicle of how war has changed, a rich work of history and a journey populated by geniuses and fools, ruthless villains and naïve idealists, self-promoting salesmen and incorrigible profiteers, a pantheon of killers of all stripes and, now and then, people who wanted the killing to stop.”

Chivers was awarded the Pultizer Prize for his reporting in Iraq and Afghanistan in 2010 which has been recognized by New York University as one of the “Top Ten Works of Journalism of the Decade.”  Published by Simon & Schuster, The Gun is on sale now for a price of $28.00 for a 496-page hard-copy or as an ebook for $14.99.