A staple of modern warfare is the “trench.”  Get behind a wall, hunker down in a hole—conceal yourself from the enemy and you’ve got a good chance of making it through a firefight.  Well, a new gun slated to see action in Afghanistan promises to change all that.  The gun in question is the XM25 Counter Defilade Target Engagement System, a sci-fi looking “rifle” the US Army will begin using in combat this month.

The XM25 is fit to fire radio-controlled 25-mm “smart rounds” that can be programmed to detonate above, below, behind or in front of the target.  With a range of roughly 2,300 feet (which is near eight football fields) the explosive round sends its payload farther than most rifles and carbines that are currently deployed in Afghanistan and significantly lengthens the average soldiers’ arm.

The semi-automatic weapon system has been years in the making.  Lt. Col. Christopher Lehner the U.S. Army’s Program Executive Office Soldier, said, “With this weapon system, we take away cover from (our enemies) forever.  Tactics are going to have to be rewritten. The only thing we can see (our enemies) being able to do is run away.” Lt. Col. Lehner expects the army to purchase 12,500 rifles this year.

The rounds utilize a sophisticated chip that receives a radio signal from the gun sight.  A soldier zeroes in the weapon with a laser rangefinder, which determines the precise distance to the target.  This innovative sight system combined with the rounds 15 foot kill radius allow the operator to “maneuver” around virtually any obstacle while maintaining a safe distance.  In effect the XM25 hopes to bring situations that were once a massive call for artillery down to the squad level—individual units capable of doing the work of battalions. 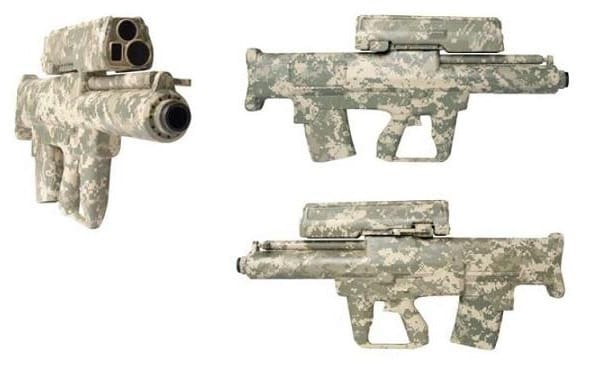