Though most people haven’t heard of it, the Collier pistol is historically important because it was one of the first attempts to produce a semi-automatic weapon, and though it didn’t catch on, it can on some level be considered a indispensible progenitor of all rapid-fire arms.

“I don’t know if it was the very first attempt, but it was a somewhat successful effort to make a repeating firearm,” said Jim Supica, director of the NRA National Firearms Museum in Fairfax, Va. “When we talk about a repeater, we have to discount multi-barrel guns like shotguns, which have been around a long time. The Collier was a marvelous achievement in technology and led to the Colt pistol.”

Inventor Elisha Haydon Collier, a Boston inventor, along with Artemus Wheeler, another inventor, perfected a five-shot flintlock gun and took out a patent on it in 1814. At the time, multi-barreled weapons like pepperbox pistols were prone to misfires, and were clumsy and difficult to operate. Collier’s genius was to invent a gun that was “self priming.” When the hammer of the weapon was cocked, a compartment automatically released a measured amount of gunpowder into the pan for another charge. 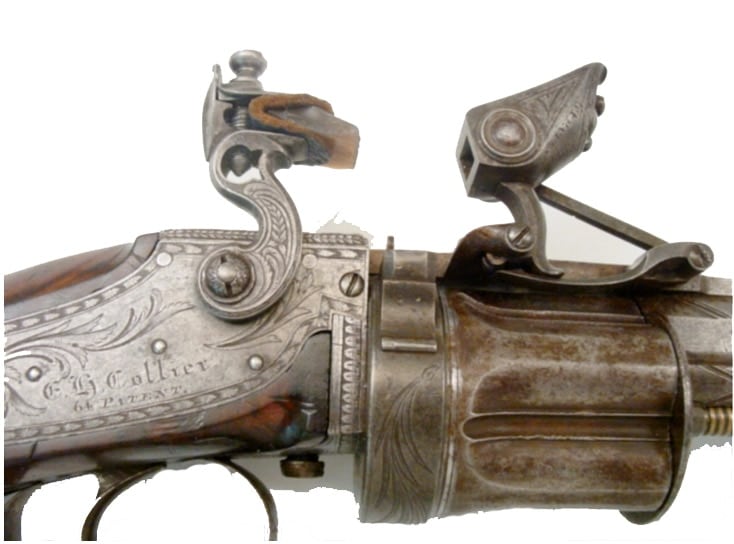 “You would bump out a wedge on the gun and manually turn the cylinder by hand for the next shot,” Supica said. “Since it’s a flintlock, a piece of flint in the hammer strikes and ignites the powder in the pan.”

The U.S. Government, coming off the War of 1812, apparently expressed little interest in the weapon, so Collier took his design to England where he and his design received a more favorable reception.

“The gun didn’t catch on in America,” Supica explained. “Collier went to England and produced a patent on it there.”

The British Army was impressed enough to order the gun in 1819 and a British arms manufacturer, Evans & Son of London, produced approximately 10,000 of the weapons during the 1820s. The weapon found use in the British Crown Colony of India, where its faster rate of re-load and more accurate single barrel became major advantages. 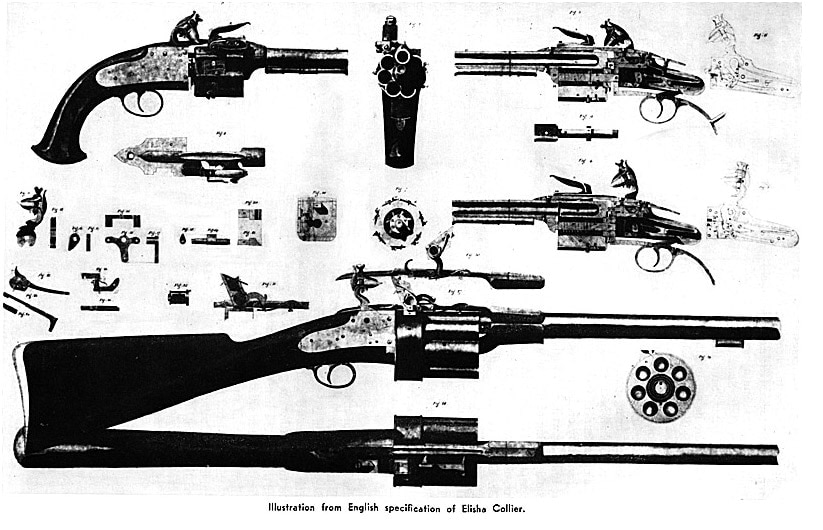 However, there were still teething problems with the novel weapon. Its flintlock mechanism was unreliable. Flints had to be regularly changed, and the pan system of storing powder was uncertain, a common drawback to all flintlocks. Also given the often inferior quality of powder of that day, misfires were frequent.

“The gun had two charges of powder, one in the pan and another charge in each chamber cylinder,” Supica said. “But discharge was a problem. When you fired the gun, a gap between the cylinder and the barrel could spit out slivers of lead, or burning bits of powder.”

Collier also produced a rifle version of his gun. In this case the shooter’s supporting (non trigger-pulling) hand could receive an accidental charge of burning shot. The gun simply wasn’t effective enough to continue in production.

However it was ingenious enough for a young Samuel Colt, who was reportedly familiar with the weapon, to draw upon the design’s ambition as inspiration. He later developed the Colt Patterson pistol and took repeating firearms to the next level.

Because so few Colliers were made, the gun is very rare and a collector’s item. The internationally famous Christie’s Auction House listed a Collier pistol in .46 caliber online for approximately $19,000. The rifle version is even rarer, and a five-shot example listed for sale at $47,000.

“We’d love to have a real Collier here at the museum,” Supica said. “Instead, we have a miniature Collier that is a replica.”