World Record Sniper Shot is the 'Most Shared' Story of 2010

Wild and exciting days are ahead of us, my friends.  As 2010 becomes but graying video clips in our collective imagination, we find ourselves, as always seems to be case, trying to make sense of a rapidly evolving world of ideas, knowledge and media.  This is a world that plays it fast and loose and, with free and comparatively “unadulterated” web-based sources of news, entertainment and socialization (of which Guns.com is a grateful member), our cyberworld has permitted unimaginable transparency between consumers and businesses.

To be blunt, the Internet is a suit’s wet dream—a “machine” that chronicles potential customers’ quirks and penchants more faithfully and less intrusively than George Orwell would have ever imagined.  The data collected from search histories and site views helps to inform pivotal decisions in the conduct of modern commerce, decisions that are far beyond my understanding.  But just as often as this data can be used to stock shelves and pursue elusive age brackets, it can also give us mere peons a glimpse of what our neighbors are tuning into and, in that respect, a small piece of 2010’s Zeitgeist. 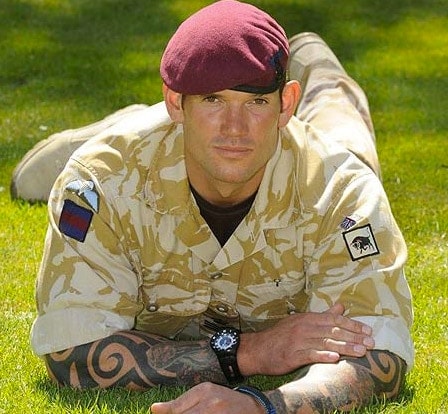 Add This is a widely employed bookmarking and sharing service.  Recently they calculated their 2010 most shared stories and coming in at #4 is a British soldier’s now legendary long shot (with no pun intended lest it detract from an event that must have only been possible with talent, judgment and years of training).

In November 2009 in the Helmand Province of Afghanistan, Craig Harrison, a British sniper and a corporal of horse in the British Army’s Household Cavalry (the equivalent of a sergeant in the American military), shattered the combat zone shooting world record by taking out two Taliban soldiers.  He “got the drop” on his enemies from more than a mile and a half away—a distance so great, experts postulate the insurgents wouldn’t have even heard the shots.

Measured courtesy of GPS technology, Harrison killed the two insurgents from an almost inconceivable distance of 8,120 feet (1.54 miles). To give you some perspective on this, that’s like shooting someone in Battery Park from the Statue of Liberty.  The shot surpasses the previous record held by Canadian Army Cpl. Rob Furlong, who gunned down an al Qaeda terrorist from 7,972 feet back in 2002. And the device that made it all possible?  An Accuracy International L11583 long-range rifle. Harrison recounted the event to the Times of London earlier this year.

“The first round hit a machine-gunner in the stomach and killed him outright. “The second insurgent grabbed the weapon and turned as my second shot hit him in the side. He went down, too.”

Harrison himself credited ideal weather conditions as the greatest contributing force to his flawless shot.

John Plaster, a retired US Army sniper instructor and author of The Ultimate Sniper praised Harrison’s unfailing precision. “When you are shooting that far, if you miss by a hair, you miss by a mile.  That is about as precise as any marksmen on the planet could shoot.”  He also commented on the fact that those two Taliban soldiers never heard a thing.  “At a distance like that they cannot even see anyone and they would not even hear the muzzle report.”

In the weeks after his record shot, Harrison received a minor gunshot wound and broke his arms when his vehicle hit a roadside bomb and was returned home to England.