We’re certainly not claiming to be Nostradamus but we called this one.  On the auction block at the 2011 SHOT Show will be a one of a kind, incredibly collectible and incredibly expensive 100th anniversary commemorative Colt 1911. 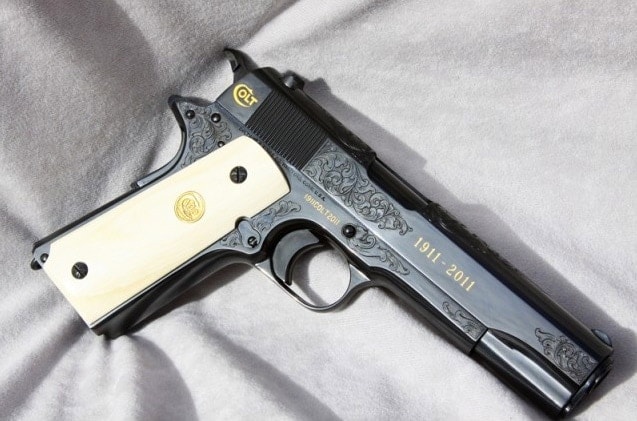 Usually with these “one time only” jobs, the company ships them directly to places like the National Firearms Museum or dolls them out to their top brass as tokens of esteem.  But thanks to Colt and the National Shooting Sports Foundation, this truly spiff handgun is being made available to Joe Shmoe’s around the world through Colt’s auction site on GunBroker.com.

As is the case more often than not, collector’s items tend to veer towards the tacky at some point in the drawing room phase.  Flowery lettering and loud colors divert one’s attention away from a comparatively unremarkable product.  Thankfully, the designers of this commemorative Colt 1911 do not appear to have fallen prey to this thinking. 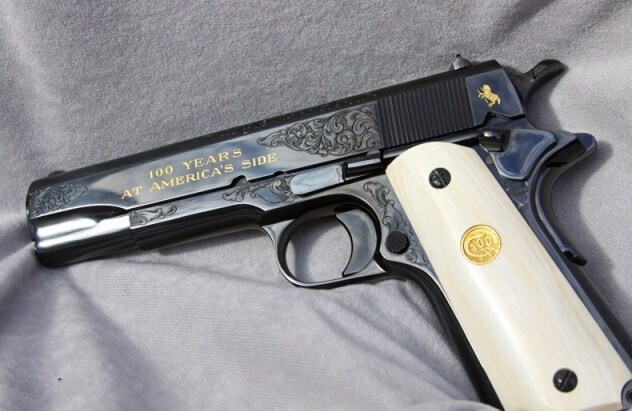 Set in gold, the left side of the gun has the “100 YEARS AT AMERICA’S SIDE” etched in modest script as well as a gold-inlaid rampant Colt.  The right side features large gold inlays including “1911-2011″ and the serpentine “Colt”. In addition, the serial number “1911COLT 2011″ is hand-engraved and inlaid with gold.  And finally, the gun will feature the serial number 1911COLT2011 also in gold—something that Colt and other news sources are  trumpeting loudly.

The choice of ivory for the pistol grips (which are unique to the model) matches masculine elegance with simple design and without sacrificing authenticity.  White plays well with the metal surfaces, which also look polished to perfection in Colt Royal Blue, and gold Colt 1911 Anniversary medallions mirror each other on either side of the grip

And with the gun comes an invitation to a birthday party as the high bidder will visit the Colt Factory in Harford, Connecticut on the 1911’s official “army approved” 100th birthday, March 29, 2011. This includes a private tour of the factory, photo opportunities and lunch with Colt artisans and management as well as a gift basket of special Colt logo items and collectibles.  At the Colt Historical Department the lucky shooter will be presented with an official 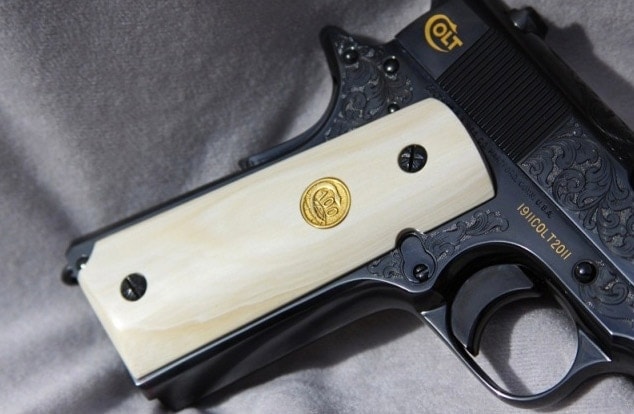 document of authenticity and the opportunity, if they so desire, to have his or her initials engraved on a spare mainspring housing.  They have the choice to have this installed on this 1911 or to keep it separate.

Auction proceeds are going to Hunting Heritage Trust’s programs (who is administering the auction by proxy for the National Shooting Sports Foundation on Gunbroker.com) to further hunting and shooting programs in the United States and preserve North America’s outdoor heritage.

If you’d like to stake your claim to this highly collectible handgun, we suggest that you have pretty deep pockets.  The Colt SHOT Show auction opened for bidding on December 17, 2010 at $1,000 and the last we checked it was well over $80,000.  Figuring the auction is not set to close until 1:00 pm on January 21, 2011, a final price of north of $100,000 is most likely inevitable.  If you’ve got that kind of scratch at your disposal, you can place a bid here.