Since the company’s golden introduction to the arms industry in 1891, Marlin Firearms has had its fingers in a lot of pies.  Early forays with derringers and pistols and much later big caliber additions to the modern sporting arms library however, have to some degree often been overshadowed by the companies abiding reputation as an innovator in .22 rimfire rifles with Marlin deserving much of the credit for popularizing the round as a target/exhibition cartridge.

Though today the name Marlin may likely conjure up images of lever action rifles, the 120-year old arms maker has recently launched an entire new series of bolt action rifles chambered for a number of thrifty, low caliber rounds.

From where we’re standing, the new Marlin XT series’s philosophy appears to really cater to the idiosyncrasies of bolt actions—accuracy and precision you can set your watch to rather than vain attempts at expediting shots per minute.  By nature, bolt actions are pretty candid about what they are and Marlin seems to have been listening when they cooked up this series.

Though you can rest assured each individual model is sure to have its own unique set of subtleties, the breed as a whole puts on parade some new ideas from the guys at Marlin. One of the biggest departures from Marlin’s earlier ventures into the bolt-action genre is the new factory installed, user adjustable, XT Pro-Fire® trigger system.   In concept, this thoroughly endorses the series as target rifles and shooters will be given the option to easily fine-tune their rifle’s trigger pull to anywhere from 3 pounds to 6 pounds without visits to the gunsmith. 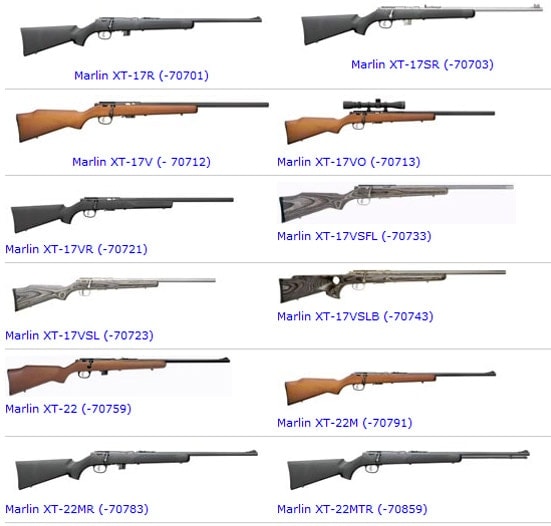 Accompanying all these alterations to these guns’ trigger components is a brand spanking new trigger safety design, which prevents the trigger from being pulled until the trigger safety is fully depressed.  In part, this system forces a shooter to slow down and pay closer attention to the shooting process—good for both safety and technique and a facet that we anticipate will be particularly appreciated in the series’ youth models.

About half of the models in the series will boast a fresh synthetic stock design, apparently derived from untold hours of consumer study.  Deviations from their previous bold actions are chiefly ergonomic, with substantial tweaks in certain models to the stock and fore-end. The most notable of these are a mixed bag of pistol grip and thumb-hole configurations in the stock that can help establish nice firm shooting foundations. The series also contains a few “el natural” wood stocked versions mostly in walnut and sealed up with Marlin’s Mar-Shield® clear-coat.

With all the ingenuity floating around in this series, Marlin managed to still not turn its back on tradition either.  For example, all the rifles in the series make use of Marlin’s Micro-Groove® rifling.  Marlin first started using Micro-Groove in the 50s for their .22 caliber rifles and swears by its ability to tighten up patterns, though with mixed endorsements from shooters.

As mentioned above, the XT series will also contain Marlin’s first stabs at youth specific models.  Clearly meant to retain the series’ overall themes of form and accuracy, design choices like a noticeably shortened length of pull and trigger reach, smaller pistol grip and a raised sight comb make these guns conducive to tutorial shooting sessions and “virgin” shooters.  In design, these two guns seem to suggest that they can instill proper shooting form by their own graces.  Marlin loosened up the bolt too which should make it easier for tiny hands to eject and cycle rounds.  Check out the picture about for a comparison between the XT .22 caliber in youth and full-sized.

The XT Series rifles are available in 22 LR, 22 WMR and 17 HMR calibers.  For a better look check out the XT series on Marlin’s website.