Guns.com talks to S&W about Their New Big Game Revolvers

The name Smith & Wesson is damn near synonymous with revolvers, so if we were putting money on any one manufacturer at the SHOT show to come out swinging in this genre, our change would be on them.  Peddling seriously big game revolvers has always a passion for the boys from Springfield, who, every few years, like to reintroduce the world to “the most powerful handgun known to man” and PR man Matt Rice gave Guns.com the lowdown on the two newest additions in their “anything outside of Africa” arsenal.

First on the block is the “modest” Model 629 .44 Magnum Hunter chambered in .44 Magnum (though it can also load .44 Special).  For a pistol that is, in theory, going to keep our Remington .308s  back at camp, this gun follows the “lean and mean” thread in form and design to the letter, i.e. carrying and shooting this hand-cannon all over God’s creation doesn’t seem like a chore. A 360-degree compensator and cushy synthetic grip on either end reinforce the hunting handgun convention and promise to pin down muzzle-rise for expedited follow-up shots.  With a barrel long enough to reach out and touch game at the 100-yard mark (and maybe even targets at the 500-yard mark) but not too long that we’d rue strapping it to our hip, the Magnum Hunter looks like an attentive entry for S&W in the hunting pistol market. 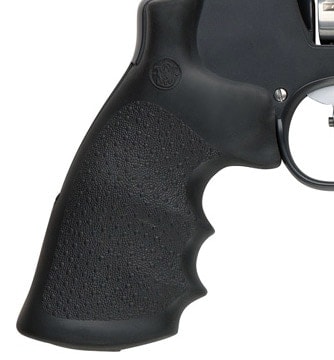 And then Matt showed us the intimidating Smith & Wesson Model 460 XVR.  This SOB lobs a 200-grain bullet over 2500 fps out of a 14-inch barrel, which begins to question how much of a pistol this brute can really call itself.   It takes a cavalcade of rounds, mostly of the .460 S&W magnum persuasion, but also couple of .45s and .454 Casull.  It also sports what we assume is going to be a necessary bipod for anchored shooting right out of the box.

The Model 629 makes use of a red/green dot optical sight and both are set up to receive optics. 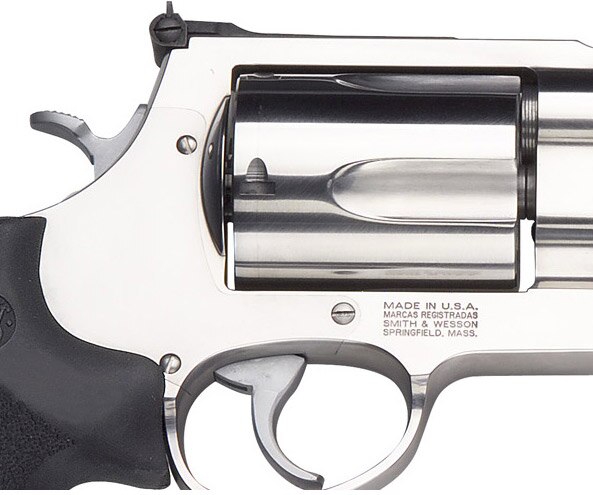