With forewords by Israeli Prime Minister Ariel Sharon, and U.S. Ambassador Henry Cabot Lodge, The August Assassin is the autobiography of John C. Elliott, a former Mossad operative and a retired member of the Office of Special Investigations within the State Department.

The book reveals in forthright and blindingly explicit detail, the assassinations of individuals such as Abu Nidal, the terror mastermind behind the hijacking of the Italian cruise ship the Achille Lauro in 1985, where the wheelchair-bound Jewish-American Leon Klinghoffer was murdered, and his body thrown overboard. The book also talks candidly about the poison assassinations of Idi Amin, the former Ugandan dictator living in exile in Saudi Arabia, and Yasser Arafat, the leader of the Palestinian Liberation Organization. The August Assassin takes the reader along on a four-decade-long, dizzying global odyssey, highlighting those operations from the summer of 1966 through to the fall of 2003 across five continents. 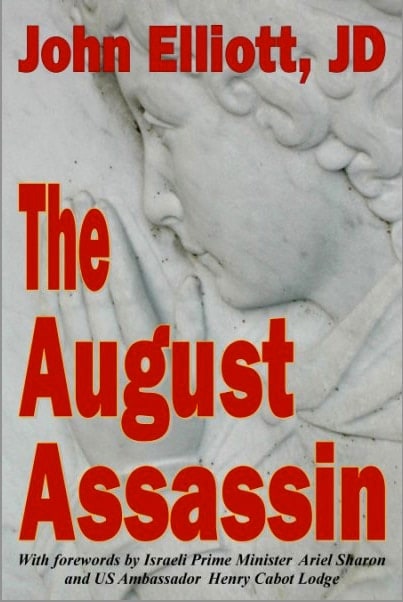 Talking about his first assassinations in 1966 as a trained sniper, the author recalled in the book, “I could almost smell the stink of the man as the thin filament crosshairs of my riflescope played up and down his body. The trigger pull was just slightly under five pounds, as the first .338 caliber bullet found its target to the back of the head …”

In a scathing back-of-the-book commentary, Venezuelan President Hugo Chavez, in a recent statement from Caracas, said, “In 2003 I promised to send the proof. The proof has now been sent to me. This book is the proof. This American killer, an emissary of the devil, was one of those tasked with my destruction … he was shrouded in treachery, and was a scourge to our Colombian friends …”

In 2004, Israeli Prime Minister Sharon said the book was both “extraordinary and compelling.”