When it comes to boxing matches, horse races and businesses, Guns.com will always put its money on the little guy.  Call us saps if you want but  time and time again we’ve seen the establishment follow suit a day later with those true innovations coming from somewhere off the map.  This is mostly because the game they’re playing just plain ain’t fair and if they are going to get what’s there’s they have to strike hard and separate themselves from the pack.

Whereas the big guys have the luxury of leaning on tradition and the merits of their venerable products, they also have the luxury of throwing the pig’s breakfast up against the wall and seeing what sticks—and we (the gun buyers) are usually the wall.  They can get away with it because they’re rich and everyone knows their name.  This isn’t right… no… this isn’t American… and that’s why Guns.com has always identified with the little guy, the small business owner, the custom shop—the guy with sweat on his brow and a one in a million idea in his computer.

We hadn’t heard of Christensen Arms until we stumbled across them at this year’s Eastern Outdoors Show. The state of Utah has been a mitzvah for the gun world in recent times and Christensen Arms is no exception. Fifteen years ago, Dr. Roland Christensen mixed his distinguished careers as a Captain with the US Army Corp of Engineers and as a prosthetic limb designer dealing mainly with graphite and carbon materials together and the result was an ingenious platform of hunting and tactical rifles. His now 13-year old custom shop just expanded its facility in the mountain town of Fayette to meet rising demand.

And it’s clear to see why. With “plastic guns” now a staple in the North American hunter’s repertoire, the good doctor was free to approach one of the greatest paradoxes in modern engineering—making something both light and strong—with a greater range of materials and his disposal and with and a more open-minded gun buying public.  Foregoing traditional steel barrels all together, Christensen rifles use barrel liners coated with woven carbon fiber thanks to their very own state of the art, manufacturing process.  The light barrels never warp and take changes in temperature better than steel, translating into a lighter, more durable and more accurate gun.  Paired with graphite stock (the same graphite they use to make prosthetic limbs and hockey sticks) and you have a rifle an anemic child could carry around the mountains all day. 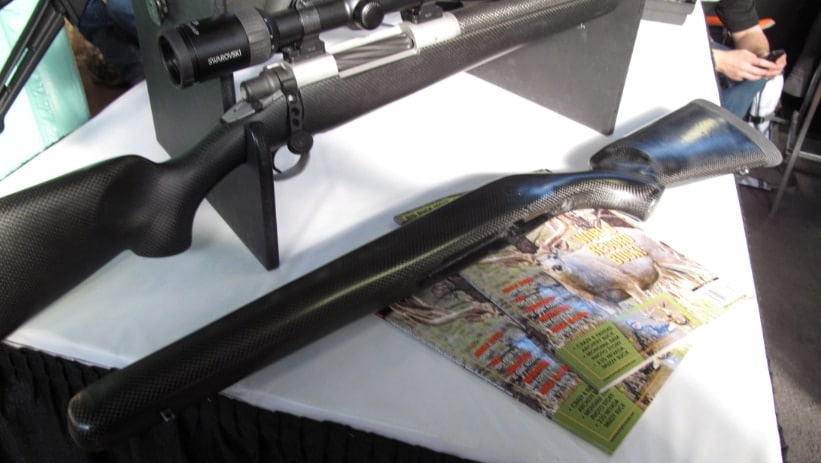 We got to shoulder a couple of their graphite guns and we can report without hesitation that they are both a strange and wonderful experience.  Poise is the operative word here and the balance of their hunting rifles imparts this surreal experience of being both alien and oddly comfortable and familiar—almost like picking up a rifle you owned in a past life.  The barrel seems to carry all the weight and the rifle just sort of lies in your supporting hand without pressing down at all.  Literally the only substantial counterbalance to the fore-end is a thick foam rubber recoil pad (a feature we’re sure we’d be grateful for if we got to send a few down range seeing as this gun it’s so light).

Most rifles come fitted with a stainless steel muzzle brake and you have the option of a synthetic stock if you are wary of graphite (which, depending on the caliber, could kick like a mule).  All stocks come with a lifetime warranty.  You can buy a gun “off the shelf” so to speak in a number of models or you can build your own gun from scratch. Christensen will chamber your rifle in the whole menagerie of calibers and even claims they’re open to wildcat loads.

What else do we like? That Christensen is also adapting their carbon/graphite principle to handguns, varmint rifles, big game guns, muzzleloaders and even tactical guns like sniper rifles and ARs. 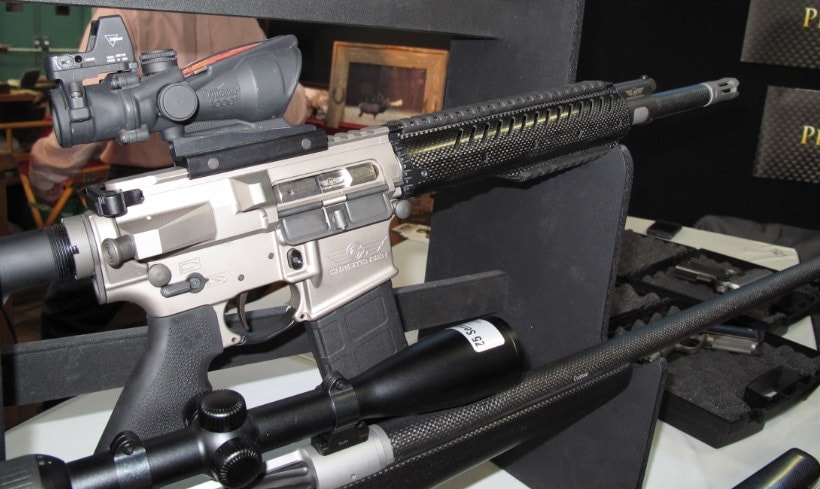 And as any tactical guru will tell you, less weight will set you free.  These featherweight guns promise to keep even the most bogged down (or huskiest) of civilian sheepdogs defending that line between tyranny and cocktail umbrellas.

Their basic Custom One Carbon model rifle costs around $4,300 and a custom 1911 costs around $3,000.  Prices fall around or go up from there.  To check out the full line of Christensen products you can visit their website here. Oh yeah, Christensen also guides hunts, runs a magazine and produces a TV program.