A Few of Words with Competitive Shooter Tom Mack

There are many reasons why people pick up a hunting rifle. For some it is subsistence. For others it is entertainment. For many their personal story lies somewhere in between. And for the very lucky, their very passion can also prove to be their livelihood.

For gun enthusiast and crack shot Tom Mack—3-Time Canadian Open Champion, 4 Time Michigan State Champion,  3-Time Kruger Classic Champion, and 3-Time Big Kahuna Champion to name but a few  of his titles—firearms have always been a part of his life.

“It’s like asking a track person why they run,” he explained. “When I was in 4th grade I used to go to school with my gun, go to the bus-stop, get on the bus, go to school and put it in my locker or the principal’s office and hunt my way home. And it was always just kind of a way of life…that was how we put food on the table. We hunted a lot of rabbits, and of course we did a lot of deer hunting, big game hunting up there. I never got into competitive shooting until I was almost 30 years old.”

Since then, it would seem Tom has never stopped. During his career he has been associated with such high profile gun-manufacturers as Krieghoff, and Blaser. Currently he is on staff for Sig Sauer.

A native of Michigan, Mack is now based in Texas, where he can often be found sharing his expertise as a shooting instructor on the 74 Ranch Resort.

“Blaser, Sig Sauer, and Mauser, are all owned by the same guy,” Mack clarified. “Michael Lüke is his name.  I changed guns from Kreighoff to Blaser, and their US Headquarters are here in San Antonio, so I came down.  I had some customers who wanted lessons, and the 74 was the only place that could shoot clays on a Monday. I got to be friends with Milo, the guy who runs the ranch, and Milo wanted lessons. He ended up recommending me to the owner, and when the owner found out that I didn’t have a family or anything, he said to just live at the Ranch. I don’t mind the city, but at heart I am a country boy.”

For a country boy Mack has seen more than his fair share of big cities over the last few years, but the transition, he says, to full-time shooting instructor has been an easy one.

“Some people look at my life and they say ‘Oh God I wish I could have that,” he said. “But I haven’t worked harder in my life as what I do now. I have taught all over the United States, Mexico, Canada, and Europe. It’s 7 days a week sometimes, and it’s daylight to dark. There are always a few people who are challenging, but it is easy for me to explain and show how to do it properly.” 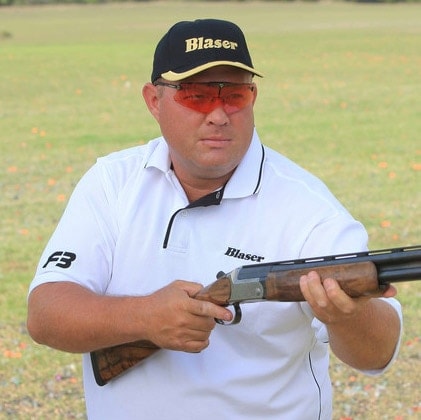 Mack is stringent in his care with firearms.

“You have to show guns the proper respect that they deserve. You can’t be afraid of them, they are a tool that can be used, but they are not picky in what they shoot—a gun is a weapon. There are always the same common rules with any firearm, and that is never, ever assume that one is empty. When people get careless, they have accidents. But accidents are accidents and there are no laws that we will ever have that will eliminate accidents.  Hopefully with care and a good trainer, they will happen as little as possible.”

What are Mack’s current favorites?

“Blaser hunting rifles are made with absolutely state-of-the-art manufacturing techniques,” he said. “And they are on a level of quality, dependability and accuracy that probably hasn’t been seen before. And the New F3 Shotgun is phenomenal. ”