For Joe Shmoe, security is usually a compromise between cost and effectiveness, which is why so many members of the Shmoe clan pack heat: for the protection of life, the protection of loved ones and the protection of property. But in a world chocked full of dark intentions and sticky fingers, even the guns need protecting sometimes and, if you’re an FFL holder or even a citizen with a gun cabinet it’s sadly your responsibility to keep your weapons off the streets.  We know, it’s a sorry state of affairs to be in but you can save your breath whining about it: you can’t slander human nature when it’s worse than words can paint. 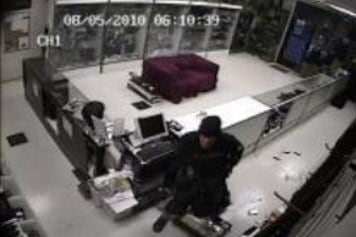 Alright, enough with the doom and gloom—take a gander at this video of our man Ace Luciano testing out one crazy fog security system!  FlashFog is a less than lethal, break-in security device, specifically designed to deter (or respond to as the case may be) smash and grab robberies (usually the type seen at gun shops with all their ATF required glass cases).  Upon breaking glass, opening a door or doing whatever you don’t want someone to do, plumes of white smoke quickly fill the room followed by a pulsing, sensory overloading strobe light.  The combination literally “blows the mind” of any sap unlucky enough to be in the room—causing paralyzing disorientation as the police make their way to the scene.  Thieves cannot see there way out, nor can they see the loot that brought them there in the first place.

The guys at FlashFog have been in the fog and lights business since 1998 as a division of the European security firm Arias Tech Ltd.  Globally, they’ve installed over 120,000 security FlashFog devices that have thwarted countless burglaries. The company claims there has not been a single injury to an intruder, a bystander or an emergency responder as a result of any security fog device.  The fog is thick, white, and odorless so it can be distinguished from smoke caused by fire. 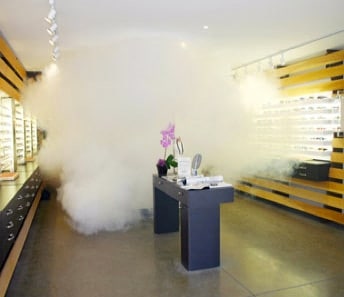 There’s a good case to be made for a system like this in these times of armed criminals, lawsuits and criminals rights and, remember, it’s the enlightened man who meets force with force rather than violence with violence. For starters, as was eventually revealed after several long and pointless seasons, this smoke monster is indiscriminate when dolling out punishment.  It doesn’t matter how big or bad an hombre you are, you can’t beat this phantom with your fists and feet.  By that token, it doesn’t matter if the intruder is one or ten, FlashFog stops anybody in the room. And unlike the psychedelic colored smoke seen in so many Batman episodes, this fog is completely safe to breathe. The smoke won’t even leave a residue all over your beautiful store.

The devices are surprisingly affordable, require minimal maintenance once installed and the installation process includes posting warning signs on the premises and informing the police and fire departments that you’re using FlashFog.

If this video peaks your curiosity (it certainly speaks for itself), take a look at FlashFog’s website here.