Five of the Coolest Guns that Don't Exist

It goes without saying for us gun folk that some of the most inspired feats of engineering the human race has ever witnessed have been our answers to killing things—though the world may be in dire need of food, water and medicine, it’s almost a certainty it will never be short on guns.

Some of these guns have gone on to galvanize the industry like the Colt 1911, a true miracle of measure and harmony, which has had such a homogenizing influence on handguns you’ll usually find more flavor in a communion wafer than in a spin-off of this soon to be centenarian.  Others get shoved down our throats every couple of years whether we like it or not like the Desert Eagle (and also a little like communion wafers).  And an untold number of guns, despite their ingenuity, outside-the-box thinking, or relative uniqueness of purpose, get caste unceremoniously, by hook or by crook, into the dustbin of gun history.  And that’s a real shame.  So in homage to these guns that have gone onto the big gun locker in the sky, I give you five of the greatest shooters from the pantheon of never-meant-for-mass-production firearms.

People are going nuts for concealed carry guns with state after state adopting Florida-style shall-issue laws and a lot of manufacturers have found the market to be… profitable.  Boberg’s got the coolest design I’ve seen so far.  The XR9-S uses a claw to raise a round from the magazine and chamber it at the rearmost part of the slide.  This means that the muzzle of the barrel, which is a healthy three-point-three-five-inches, stops at the end of the trigger guard.

People who’ve shot it rave about its low recoil, because, not only does it have a respectable amount of barrel, it’s got a nice grip and a really low bore axis. 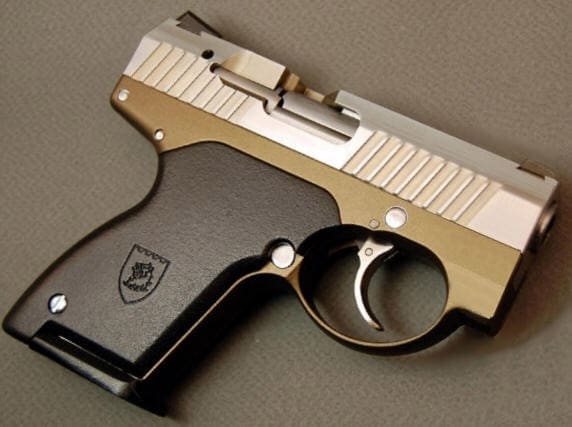 Why is this popgun so damn cool?  Because it’ll finally put an end all of those Internet arguments about which .380 is the best.  Look, the best answer to that question lies somewhere between the SIG p232 and shut up, but if you can have a 9mm in the same package with all the performance of a compact, and you’re still going on about how your Walther delivers kicks like bricks and everyone else is your window, then people will know to ignore your every keyed opinion.

Yes, I know Bond’s was a .32ACP but that’s neither here nor there.  I just want the arguments to stop.  A guy can dream, can’t he?

Why doesn’t it exist?  ‘Cause they’re not making any more.  I don’t know why.  Something tells me though that even if it retails for a grand, there’s a market for that sort of thing. I cite the EMP.  All and all, I must conclude that the company is secretly a part of the whole anti-gun cabal—promising a great design like this and getting people to hold out for it.  Shame on you. Either that or it just doesn’t work.

At the other end of the spectrum is the Bren Ten.  It’s a massive pistol based on the design of the consummately overshadowed CZ 75.  If you’ve never shot what is arguably the most influential handgun made after the 1911, you’ve done yourself a grave disservice. 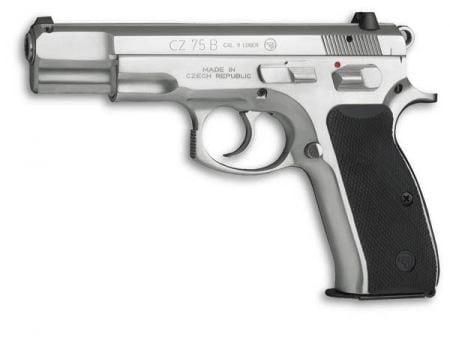 The only bad thing anyone can effectively muster against the 75 is that it doesn’t really warm up until you’ve shot it about a thousand times.  I consider that to be a plus, actually, because it mandates a good amount of range time (which is totally serious work and not something that’s done for fun which is why I like it). 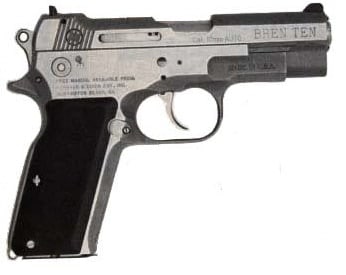 The Bren Ten didn’t have any such requirements, or so I’m told.  Shooting one of those was like shooting angels in heaven, everyone getting smarter and it smells like brownies for the rest of the day.  They only made 1500 and the project fell through, even though it was practically backed by the FBI. 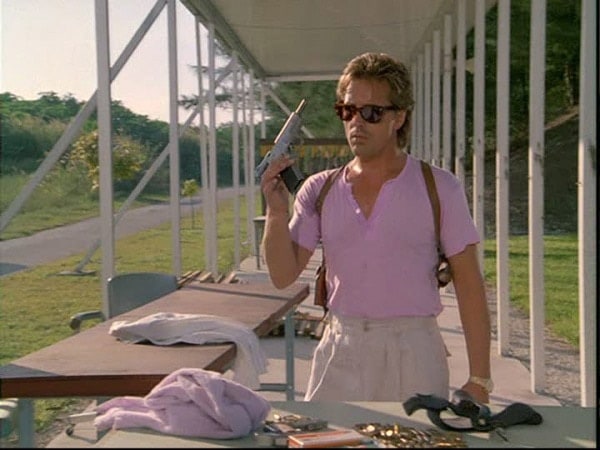 Why did it all go to pot?  The Italians.  The government prohibited the export of the magazines.  The reason’s up for grabs.  Maybe they wanted to swoop in with their own remarkably similar 10mm Tanfoglio/EAA Witness.  Maybe they had something against arming the FBI.  One thing will always remain impossible to find though: a convincing argument for 10mm pistols.

A while ago, several manufacturers put out polymer revolvers.  People like that sort of thing because, I don’t know, if you’ve ever shot a snubbie .357 for the comfort of it, you’re clearly exhibiting symptoms of alien hand syndrome.

Polymer frames bend, and while that is clearly the root of the plastic v. steel charmer, it does have the benefit of dissipating some of that equal and opposite reaction stuff into a soothing heat courtesy of the laws of thermodynamics. 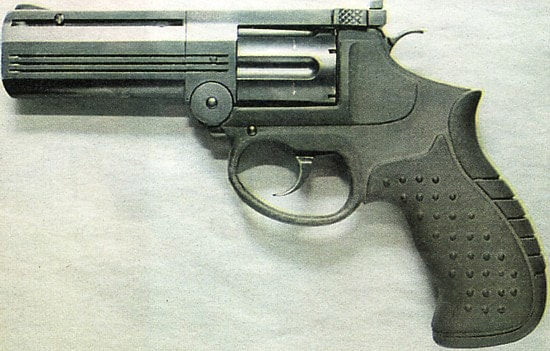 And if they can do that for snubbies, then they can do that for real, honest-to-God service revolvers.  I’m not saying that we necessarily need the pampering, but if people pay money to have tiny-footed women drop hot rocks on their backs and we have the technology to roll that into shooting, why for the love of all that is good haven’t we done this for reals?  Enter the Izmech MP-412 Rex. 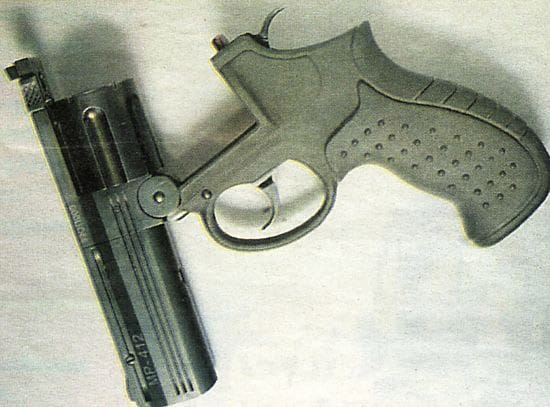 A damn fine reason for liking the MP-412 is that it’s a top-break revolver.  That was certainly an issue in 1920, but so was getting crushed by runaway horses.  A top-break revolver is not only safe, but ambidextrous.  And it looks so cool!  If Indiana Jones were fighting Nazis today you can be damn certain he wouldn’t be packing a Webley. 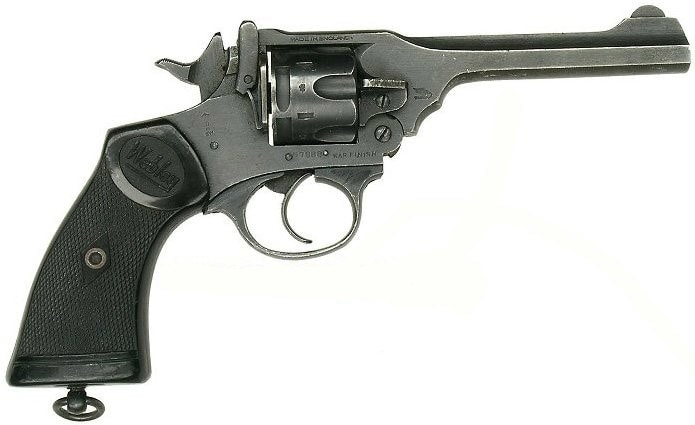 Why don’t they exist?  Because the fine craftsmen at Izmech don’t believe there’s a market for revolvers in the U.S.  Is that… Does that even… Seriously?  I have another theory: the same company makes Saigas, right?  I think the guys at Red Jacket are gluing so many Saiga 12’s to pocketknives and bottle openers that Izmech can’t be bothered to make anything else.  Thanks again, Reality TV. We’re all so proud.

Then there’s the Gyrojet: a handgun (or rifle or carbine—it’s a whole family thing) that shoots rockets.  Do you need a better reason for existence than the fact that it shoots rockets?  I live in the future!  I have a phone that’s also a camcorder and a laptop; I have a laptop that’s also a TV, every single video game console since Atari, and a virtual Library of Congress of por–of great literature, but no rocket gun! 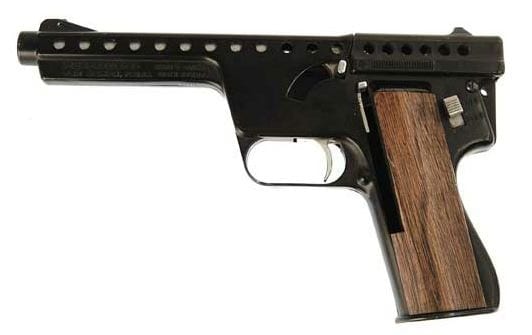 The only way I’ll be at peace with this is if somehow, by depriving us of caseless, high-velocity rocket guns, we wind up armed with laser guns.  Or super-capacitor powered super-conductor-operated railguns.  Or any firearm that requires at least two supers in its name to describe its function.

There were some reasons for its failure to manifest: Gyrojet ammo had problems and wouldn’t maintain viable trajectories; the rockets required some time to accelerate to reach their potential velocity and weren’t suited for up-close work; the ammunition wasn’t stable and it was expensive… but all of those reasons pale in the light of the case for Gyrojets: effin rocket guns, man! 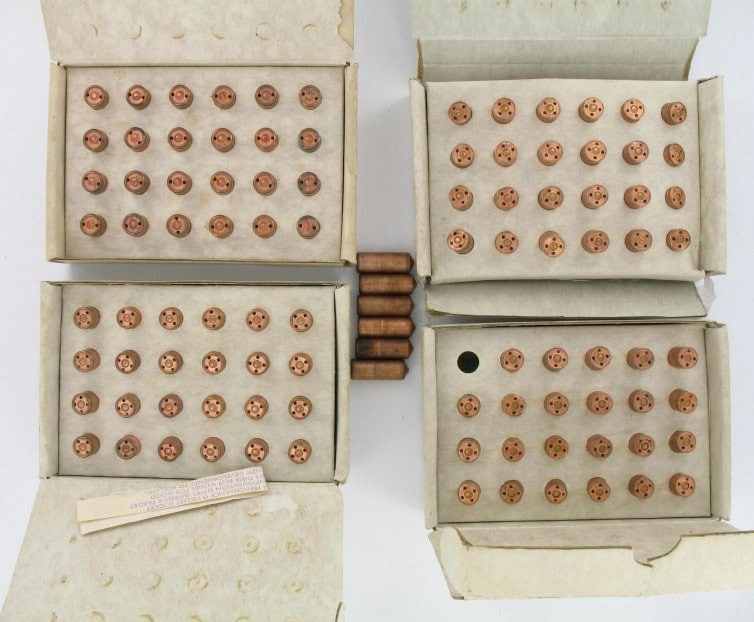 Lastly, we have an underwater dart gun, the H&K P11.  Not only was it limited to Special Forces diving-types, Heckler and Koch even denied it’s very existence. 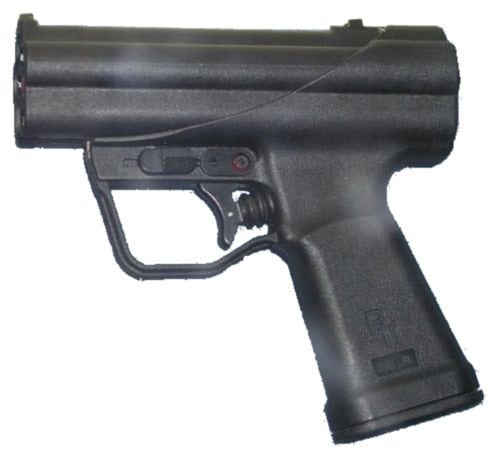 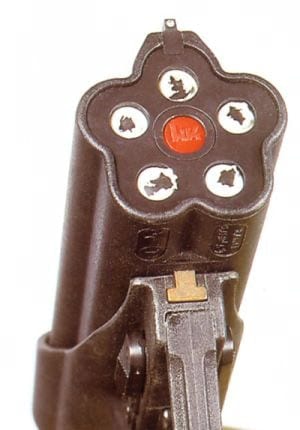 And it sounds so uniquely-purposed for dispatching people underwater that it’s almost only use could be in overly elaborate murders, but the truth is that there is a very compelling reason for everyone to have one.  Sharks.

While shark attacks are statistically as common as say, lightning strikes, they are factually much, much more common.  You see, sharks don’t leave witnesses.  All those missing persons out there?  Well, a bunch are inside sharks, you can be sure of that.  If people really knew what they’re getting away with, we’d all be packing dart guns.  You think you’re safe from sharks in Wyoming?  Ha!  You have a toilet, don’t you?

Got any other great guns that don’t exist?  Speak up in the comments.  I’ll even start you off: the Dan Wesson PPC.  If I could find one, I’d sleep with it.  And I don’t mean I’d keep it in the bedside table; I’d do sinful things to it.  And our bastard children would be gorgeous.