Kickstarter is a website that hooks up would-be-inventors with would-be-investors in a token example of the Internet’s very real sovereignty over all things “social networking”.  Inventors post written descriptions of prospective projects, photos of prototypes, snazzy videos (like the one below), updates and the like, while funds ostensibly flow in from interested cyber window shoppers, tech devotees and fans of good, old fashion entrepreneurship.

If this is the kind of thing you support, then you may want to consider opening your mind and wallet to a prototype Paintball Robot.

As you can read in the inventor’s extensive overview of the project, the idea was born back in the carefree days of the early 2000s when cheap, wireless security cameras were new and all the rage.  It has turned into an all terrain tactical robot with a top-mounted paintball gun (though we suspect a device like this could haul more than just a paintball gun and also suspect its maker is more than well aware of this).

From an extended distance, a user can make the mobile sentry change the elevation of the gun, climb stairs and turn in place 360 degrees.  We have a feeling a camera will probably make its way on there somewhere as well.  So, why doesn’t the top-mount also pan in circle? Because besides the expressed mission statement of making the paintball robot kickass, there was also the expressed mission statement of making it light enough for a single person to carry. 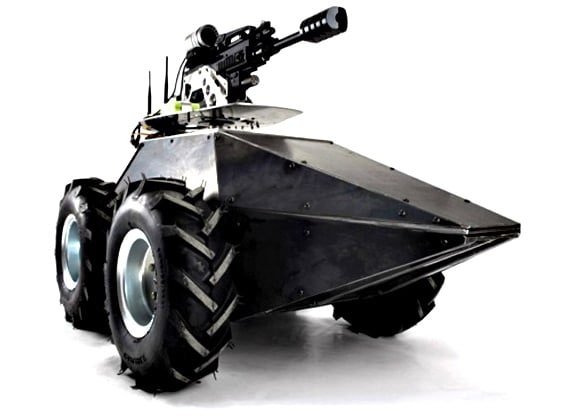 Thinking this is something you could get behind?  Support this project with a pledge, large or small, here.  Hey, you can buy a couple of bolts for a dollar.  This wireless sentry, paintball spewing will eventually retail for $1,200.