Umarex USA Moves From Airguns to .45 ACP with New Regent 1911

The name Umarex USA may not ring a bell for a lot of traditional shooters out there but, to the oft-neglected airsoft and replica arms crowds, the name means mountains.  With damn near every airsoft gun in existence manufactured in Asia (often with US plastics), US importers like Umarex are the only real conduit between consumers and the world of super realistic plastic guns—unless of course you have family or friends in China. 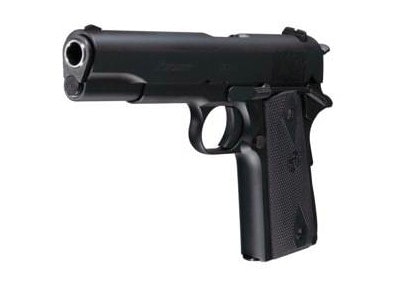 Well, it looks like the world of toy guns has been good to Umarex, so good in fact that shooters of all walks may be getting better acquainted the name. In a recent press release the company announced that they will begin offering their very first firearm—the Regent .45 ACP 1911—sometime in the near future.

Trabzon Gun Industry manufactures The Regent in Turkey and it was previously imported by IAC.  Unlike those Regents however, the Umarex Regents will bear distinct Hogue grips (which you can get a gander at in our pictures). 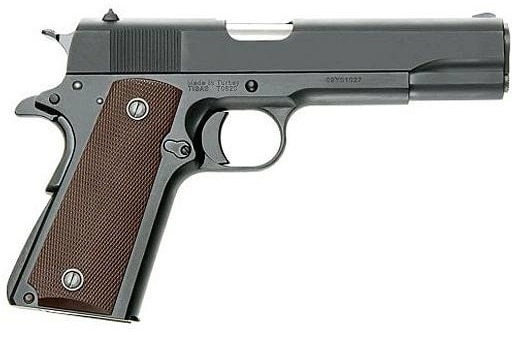 The steel cast frame puts its unloaded weight at somewhere around the 2.5 pound mark which is remarkably close to the weight of the original M1911.  Though a full spec sheet is lacking, we can tell you it features a 7-round magazine, modest 5-inch barrel, a conspicuously low ejection port, wide hammer, arched mainspring housing and, as previously mentioned, a synthetic Hogue grip—who are in the grip game and the grip game only.

We’ve seen the blued version at around $430. A stainless version is coming down the pipe and will retail for about $100 bucks more.  They began taking orders to ship February 23rd, but no mention of the Regent on their website here so here’s Umarex Regent from the reliable folks at Gunbroker. 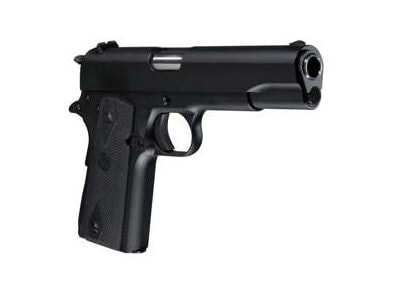