Though you’ll probably never hear us preach anything but “Buy American,” Fabbrica d’Armi Pietro Beretta or, as its known in the US, Beretta, boasts a tradition that traces its roots back to the Renaissance and that’s something the New World, in all its glory, just plain can’t touch. The name itself calls to mind words like artisanal and handmade and, though probably totally inaccurate, the impression that some spry old Venetian is berating nervous apprentices and pining over each gun as if it were his firstborn.

Current commander-in-chief Ugo Gussalli Beretta is a direct descendant of shop founder Bartolomeo Beretta, who, back in 1526, sold some muzzleloaders to the City of Venice and so began an arms dealing empire that walks tall to this day (they still have the first bill of sale on file).  Throughout the 20th century the company acquired Benelli, Franchi and Stoeger making it the largest arms manufacturer in Italy, bar none, and a premier maker of military arms.

Which brings us to their newest gun.  The new Beretta Mx4 Storm is an upgraded, submachine gun translation of the company’s civilian semi-automatic carbine, the Cx4 Storm, scheduled to see action with Armed forces in India and beyond in the following months.

About seven years ago when we first met the Cx4 Storm, it was clear Beretta designed the carbine to sing lead with their semi-automatic handguns. Any of their 9 mm sidearms, like the Beretta 92FS, played nice with the compact rifle, so nice in fact that their magazines were interchangeable freeing up civilian watchdogs to carry one type of magazine and more ammo without adding unnecessary weight.  The brawny carbine was also up to caliber conversions (pistol caliber conversions that is, most notably .40 S&W and .45 ACP) by dint of a couple of specific aftermarket parts—we wonder if these will be incorporated into any Mx4 carrying soldiers’ kits or whether its too much of a hassle (its not particularly field friendly now). 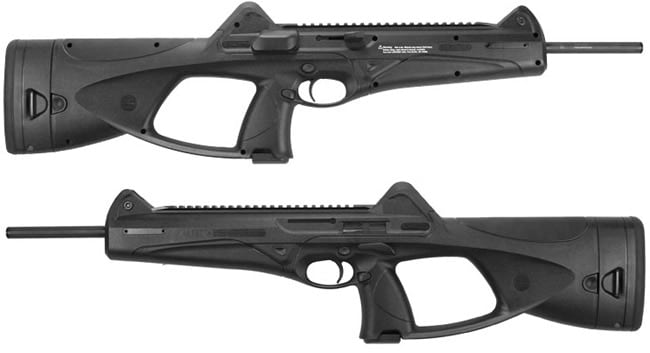 The Mx4 Storm comes chambered in 9×19 mm NATO and distinct from its civilian counterpart it sports a 12-inch barrel (versus the ungainly 16 inches of the Cx4).  From tip to tail, the submachine gun is 25-inches long and weighs in at 6.28 pounds (unloaded but with a magazine). We’re assuming what we’re seeing Beretta’s 30-round magazine jutting out the grip. If the full auto, military model follows suit with the Cx4, then the gun will be able to hold a maximum of five Picatinny rails, spec’d for a grocery list of lasers, flashlights and other accessories. 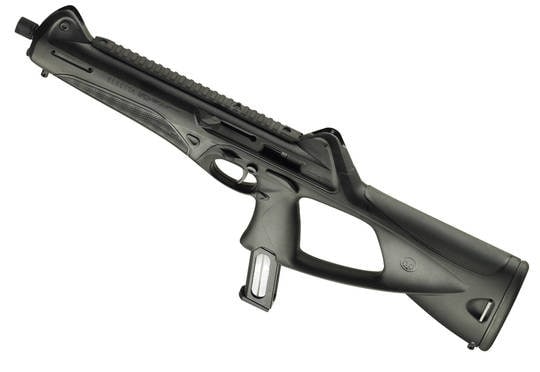 We’re also taking the decrease in barrel length and what can only be some form of muzzle attachment screwed on the end as indication this gun is meant to support flash suppressors, silencers and muzzle brakes.

And with the Indian Ministry of Home Affairs ordering a shedload, slated to hit the banks of Mumbai sometime within the year from February, its safe to say those suave Italians are set to do business in tempo allegro on the Subcontinent in 2011.  Take a gander at Beretta’s product line here.