There are very few things outside of the legal intricacies of turkey hunting (things such as licensing, hunting in season and gaining permission of property owners to hunt) that are more important to the pursuit than the primary hunting tactic of camouflage.

Colloquial turns of phrase have all but ensured most of us are aware of the superhuman vision of hawks, eagles and falcons.  Without a gaggle of cute idioms, the incredible visual acuity of the wild turkey has gone uncelebrated outside of hunting circles.  Turkeys share the same telescopic eyesight with raptors but, because their eyes are on the sides of their heads, their field of vision far eclipses their avian relations.  I read a report recently that the eastern wild turkey has a field of vision that could possibly exceed 300 degrees.  Further, wild turkeys also display unparallel sensitivity when detecting movement. 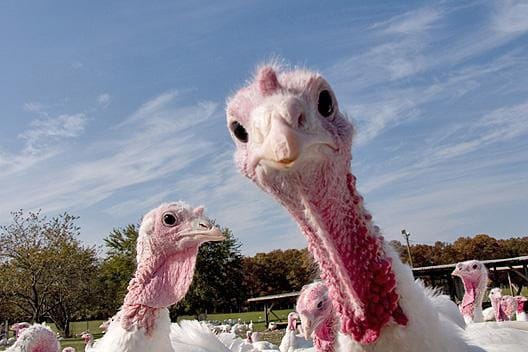 The point is though, consistently successful turkey hunting requires near perfect concealment.  Outside of blind dumb luck, this is the most important tactic to harvesting a wild turkey.  A hunter has to be intimately aware of his or her surroundings and be able to match and blend into those surroundings in order to ambush such a cautious, alert and well prepared game bird. 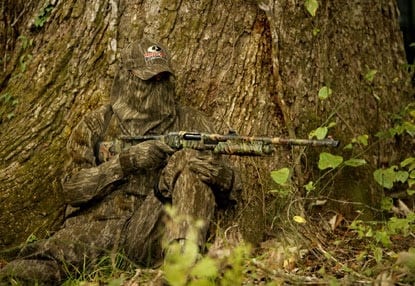 Like deer, tom turkeys enter a period similar to the “rut” in which they are in active pursuits of hens.  This occurs in early spring and makes them the most vulnerable simply because they are distracted and their attention to their surroundings is lessened.  Note that I said lessened, not blinded, because even with a head full of sin, they still pretty much represent the litmus test of a hunters’ ability to hide. 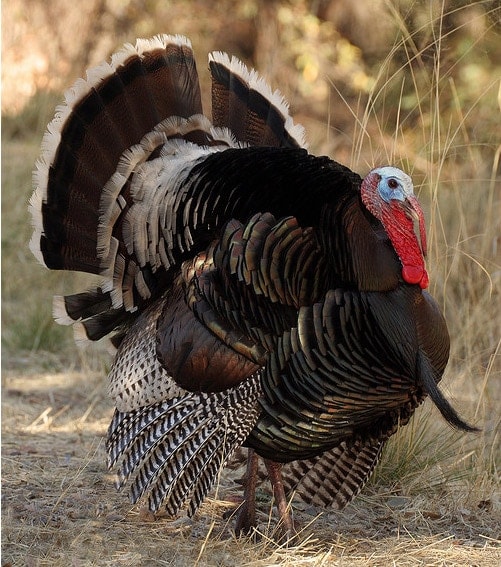 And by that same token (and as is so often the case in human society), the toms are the distracted ones, not necessarily the hens.   Generally found one following the other, it’s very easy to get “burned by a hen”—you’ll know it when it happens because it’ll be heralded by a “putt” (a single note call of alarm) and then all the turkey will suddenly disappear. 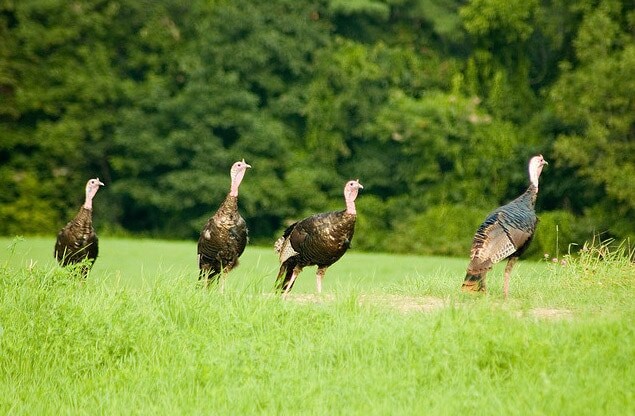 I was on a hunt a number of years ago in timberland with steep ridges and we had set up in a really nice location.  Our concealment was ideal and our camouflage matched the terrain.  We were comfortable and confident that we couldn’t miss.  When the sun rose that morning, we could hear the turkeys flying down from their roosts and could hear the toms gobbling as they staked out their territories for the morning.  My hunting partner, an expert turkey caller, worked his magic and he had a few gobblers talking back, when circumstance well beyond our control (read:  seductive hens) led the toms in the opposite direction. We began a risky maneuver of stalking the turkey in hopes of using the terrain to our advantage.  After about an hour of crawling on our bellies, crouching behind fallen trees, and getting tangled in an ancient barbed-wire fence, we were able to see them in a field just below the ridge.  Their heads had turned from red to bluish-white, which is actually a physiological example of turkey showing excitement.  We crawled another fifty feet and about that time, we heard it.  The dreaded “putt.”  We were burned.  Little did we know a hen was watching our movement, parallel to us on the same ridge.  The turkeys disappeared into the foliage like ghosts and our hunt was over. 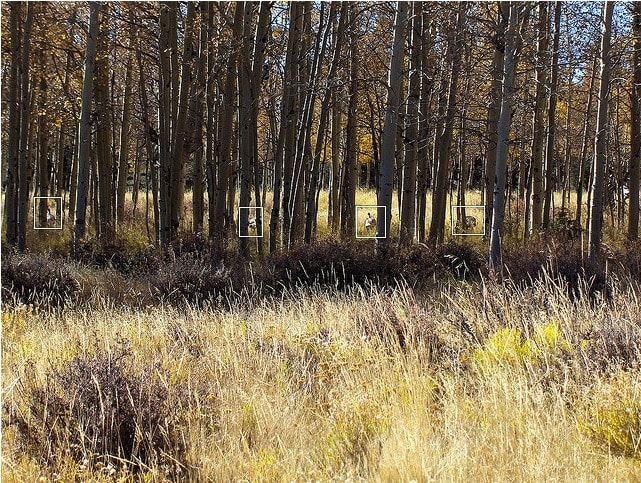 What’s the moral of this fable?  Camouflage appropriately, conceal well in the environment, sit very still and have patience.  We are aware of turkey vision capabilities so we must conceal everything including our guns to match the surroundings.  In theory, the only thing truly visible should be the hunters’ eyes—even now veils are available to cover those—while in 2011, hunters of all tax brackets have access to use portable blinds, which would undeniably reduce the need to wear as much camouflage—but that’s another article. 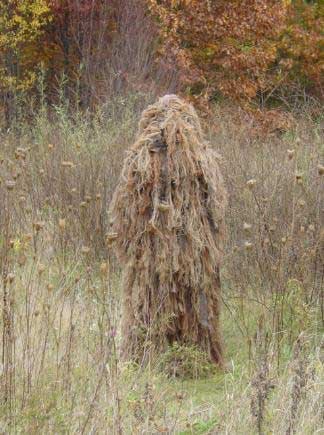 Around the mid-1800s, Scottish gamekeepers invented specialized camouflage, which would allow them to completely blend in to their environment to catch poachers.  These same “Ghillie suits” are now used by the militaries of the world with great effectiveness as well as by a few hunters who like extreme concealment.  The rest of us hunters prefer camouflage—a little more conventional and a little more inconspicuous if you were to say, need to wear it into a convenience store. 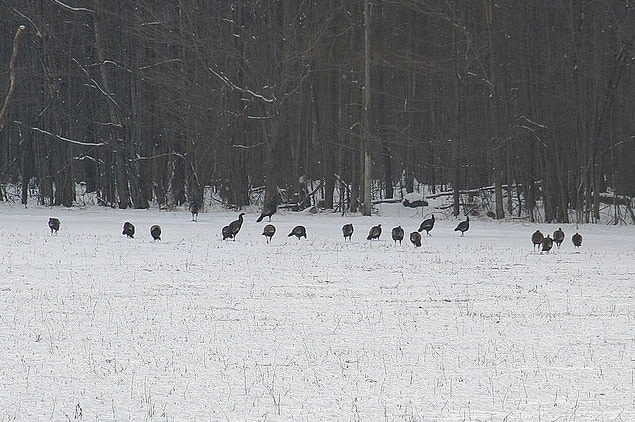 There are numerous brands of camouflage on the market and many of them are exceptional in every respect. Though it may seem obvious, the first thing you want to consider is that the color patterns are appropriate for the season.  Bright green won’t blend into brown vegetation and leftover snow, nor will a snow pattern blend into Georgia in springtime (which sort of goes without saying).  The short of it is, you’ll probably need a couple of different options to play according to how far away winter is from spring gobbler season that year. 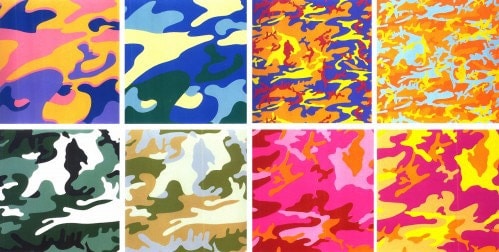 Secondly, make sure, when considering what to purchase and wear, that it will match your terrain and environment as closely as possible and what I mean by match is that, besides having the proper colors and breaks in pattern, the elements contrasts properly. A camo that shatters the uniformity of the foliage is even worse than wearing hunter’s orange.  You will need camouflage with contrasting lights and darks, using natural elements, with a perception of depth (3-D) if possible.  Today’s “deep” looking camouflages are excellent for this. 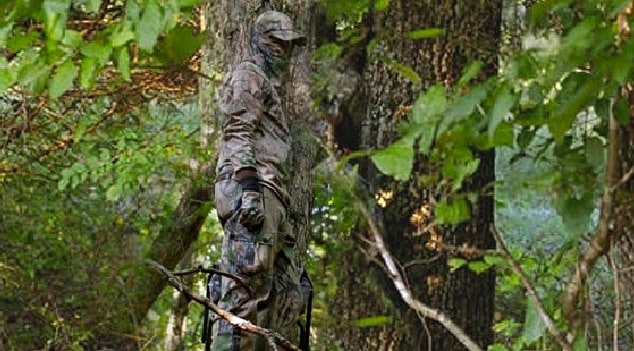 Mossy Oak has a brand new camo called Obsession.  This camo makes a hunter-ghost like in the right environment and virtually disappears when needed.  It has great depth, use of shadow, pattern, colorations and use of natural elements.  Its name is appropriate and realistically demonstrates turkey hunting for tens of thousands of hunters – Obsession.  It is my favorite and what you will find in my closet and behind the seat of my truck. 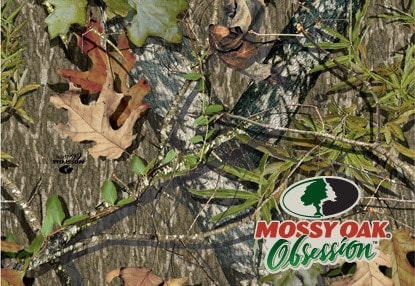 Realtree brand has a camo pattern that rivals all others named Realtree APG.  It has neutral tones, high contrasting fields, uses natural elements and colors.  It looks about as real as you could expect on a cotton shirt.  I see a lot of this particular brand being utilized by turkey hunters with great success. 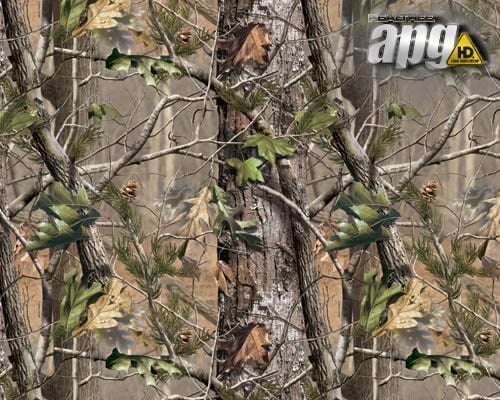 Both of these larger brands are very popular and readily available in most hunting and sporting retail establishments.  However, because I’ve got a soft spot for the smaller camouflage companies, I have seen one that I think will be well received in years to come called Buckthorn Camo.  This brand of camo is designed and owned by a wildlife professional and possesses nearly all the same qualities as the two big guys.  Additionally   Buckthorn brand can beat its chest that all of its camouflage is made entirely in the USA and, despite this, the cost is economically competitive to all other major production brands.

But all in all, pick what works.  Check with your friends, wildlife professionals, the chap at the local sporting good store and even research online.  Learn what works best in your area and practice with it.  Wear your camo into the field and practice what positions work best for you and are most comfortable.  Don’t go on your turkey hunts without being familiar with your equipment.  If the turkey can’t see you, they can’t evade you, and will result in much more successful hunting experiences.