A Successful Elk Hunt Depends upon How We Measure Success 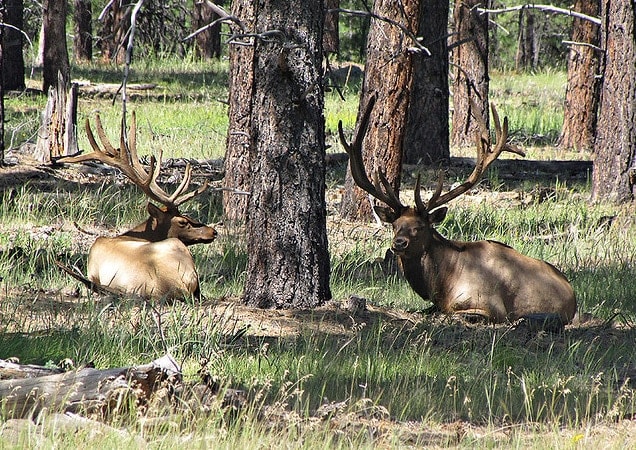 Here in Arizona, hunting big game is a crapshoot. Or, more literally, it’s a gamble because, if you want a big game tag, you have to get in the lottery with everyone else who wants one. There are always more hopeful applicants than tags, thousands more. Hunter success rates for drawing an elk tag range from one percent in prime elk country to 100 percent where there are no elk anyway. Arizona is pretty marginal country for big game to begin with, and it becomes more marginal every year with habitat lost to urban sprawl and the activities of ever more people. 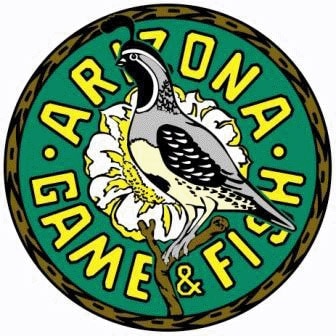 Fifteen years ago I first bought into the Arizona elk lottery. I wanted a bull tag.  What I got was a bonus point, a consolation prize for those not drawn. Bonus points move you up in the line in the next year’s lottery, but it also moves up the thousands of others who also weren’t drawn. Some years I didn’t put in for an elk tag—too busy, missed the deadline, traveling, whatever. I got deer tags. Javelina tags. No elk tag. Then last year two friends and I put our names on an application for a cow elk hunt, and the Game & Fish computer pulled our number. Fifteen years after I first put in for an Arizona elk tag, I was finally hunting in mid-October, 2010.

Because of prior commitments (how was I supposed to know I’d actually get drawn for elk?) I could only hunt three days of the week-long early elk season. I spent an equal amount of time ensuring my rifle was still zeroed, prepping camping gear, stocking up on camp food and water – you know the drill. Craig went out a day ahead of Ken & I and found a good camping spot; we spent the first afternoon setting up camp and taking a look around.

Some guys like to sit up late into the night, drinking drinks and talking talk around the campfire. After a full military career of standing midwatches and flying all-night missions, I really like eight hours of sleep, so getting up at zero dark thirty to intercept an elk’s path by daylight means hitting the sack early. Thankfully, Ken and Craig share that philosophy, a benefit of hunting with guys in my own age bracket. 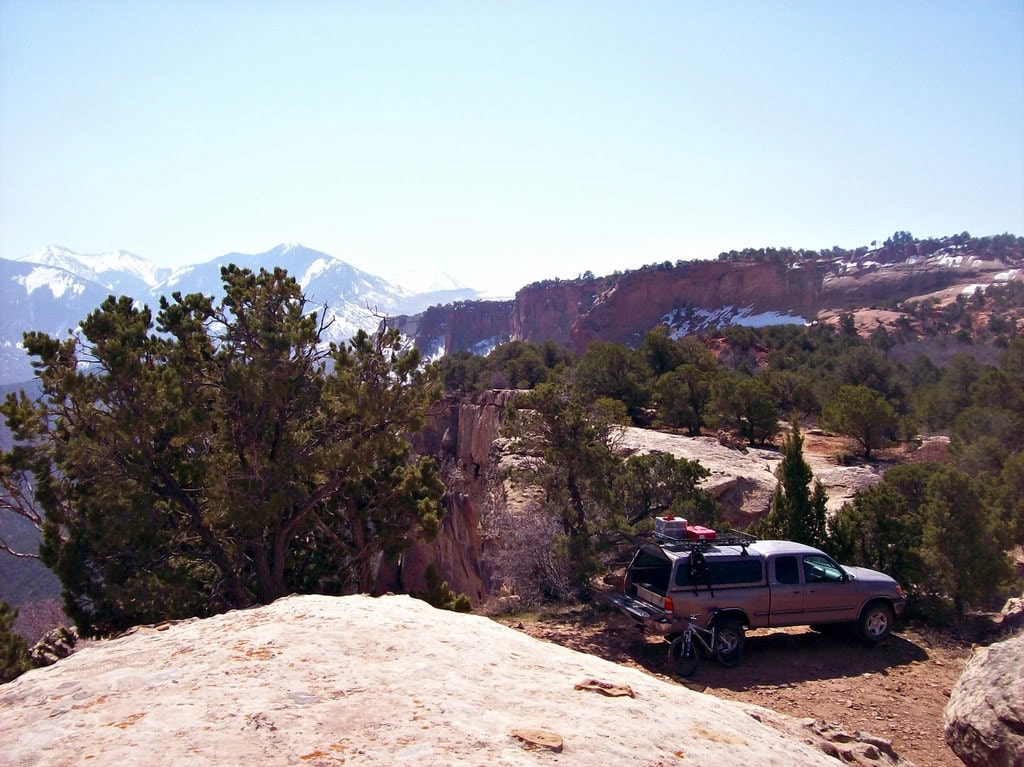 Craig slept in his little trailer, Ken in his van. I don’t go out there to sleep in such sensory deprivation tanks; I inflated my air mattress and tossed it in the back of the truck (sleeping on the ground in Arizona is an invitation to scorpions seeking body heat). My mummy bag went on next, with a buffalo hide on top of that. I settled into the mummy bag, pulled the hood down over my forehead and was warm enough. 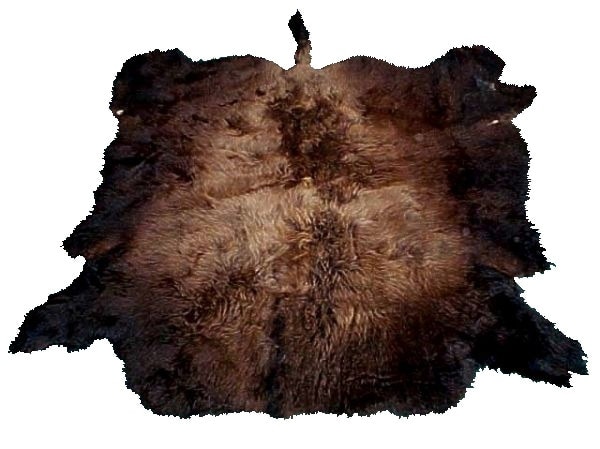 City light pollution makes us forget how many stars there can be on cold, clear nights. There must be two for every one of the thousands of hunters who didn’t draw elk tags, I thought, staring up from my mummy bag. I swear I could just barely make out the Orion nebula, if I didn’t look directly at it and let my peripheral vision pick it out. The Pleiades, I remembered, were sometimes used as a test of eyesight; I could see six, maybe even seven stars in the cluster. They’re young stars, I recalled reading, still fusing hydrogen into helium and just flickered on maybe 150 million years ago, when earthly birds first started dabbling with flight. Did those early birds see the Pleiades light up? Can bird eyes even see stars? 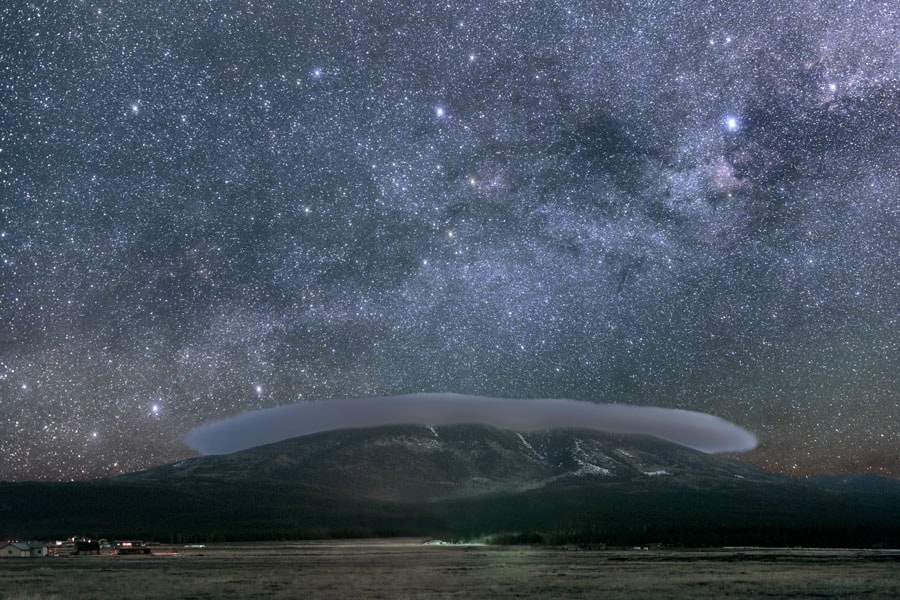 Somewhere at the edge of my hearing I thought I heard a bull elk bugle. I held my breath, waiting to hear it again. Silence. The silence of a high Arizona plateau, no rustle of wind in the pinyon pines or furtive animals among the catclaw and gramma grass, no traffic, no airplanes, no music or voices, nothing. It was so quiet that I could hear the vertebrae in my neck squeak when I turned my head. Must have imagined that bugle. I breathed again, and watched a fast, unblinking satellite pass over on a polar orbit, south to north. 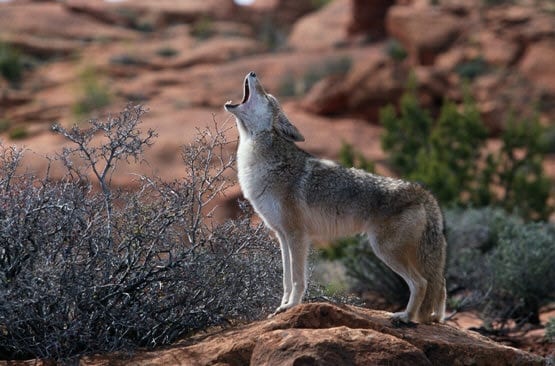 I woke several times during the night, watching Orion stride across the dark sky to the west, bright Sirius the dog star at his heel, and the handle of the Big Dipper spinning slow like the hour hand of a clock unwinding the hours ‘til dawn. Coyotes howled over there, way off; another pack responded from over there, much closer. About time to get up. 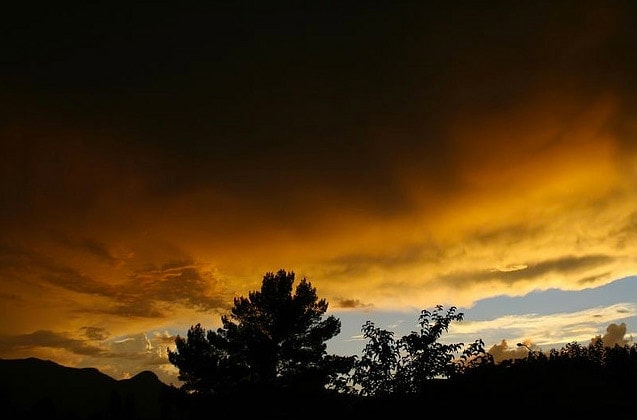 I put the coffee pot on and cooked us an easy, hot camp breakfast I developed from a lifetime of applying the KISS principle to camping: I scrambled eggs in a pan and dumped them on tortillas waiting with cheese, salsa and pre-cooked bacon. Two or three of those will stick with you for a couple of hours of elk hunt or trout fishing or just camping with the kids.

The first day, the day before elk season opened, we scouted. Craig had hunted here by Red Lake often over the years and he pointed out all the places where he’d seen or bagged elk. We found fresh sign everywhere and I got a good feeling about the next morning when I found an often-used elk trail. Eight, maybe nine cows had been there while we were still in camp. 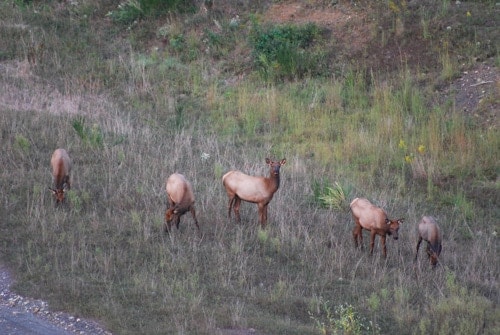 That night, an intermittent stream of incoming hunters’ vehicles woke me again and again. Always, the stars filled my eyes before falling back asleep.

On opening day we saw a single elk, a bull, about a half mile away across the lake. (If you’re thinking of hunting here, know that “lake” and “river” in Arizona doesn’t imply water. Though illustrated on maps as blue lines, most “rivers” only run after a thunderstorm, and many “lakes” are awash with nothing more than grass. Red Lake is the latter.) I couldn’t know it then, but I would, in fact, never lay eyes on a living cow elk the whole hunt. 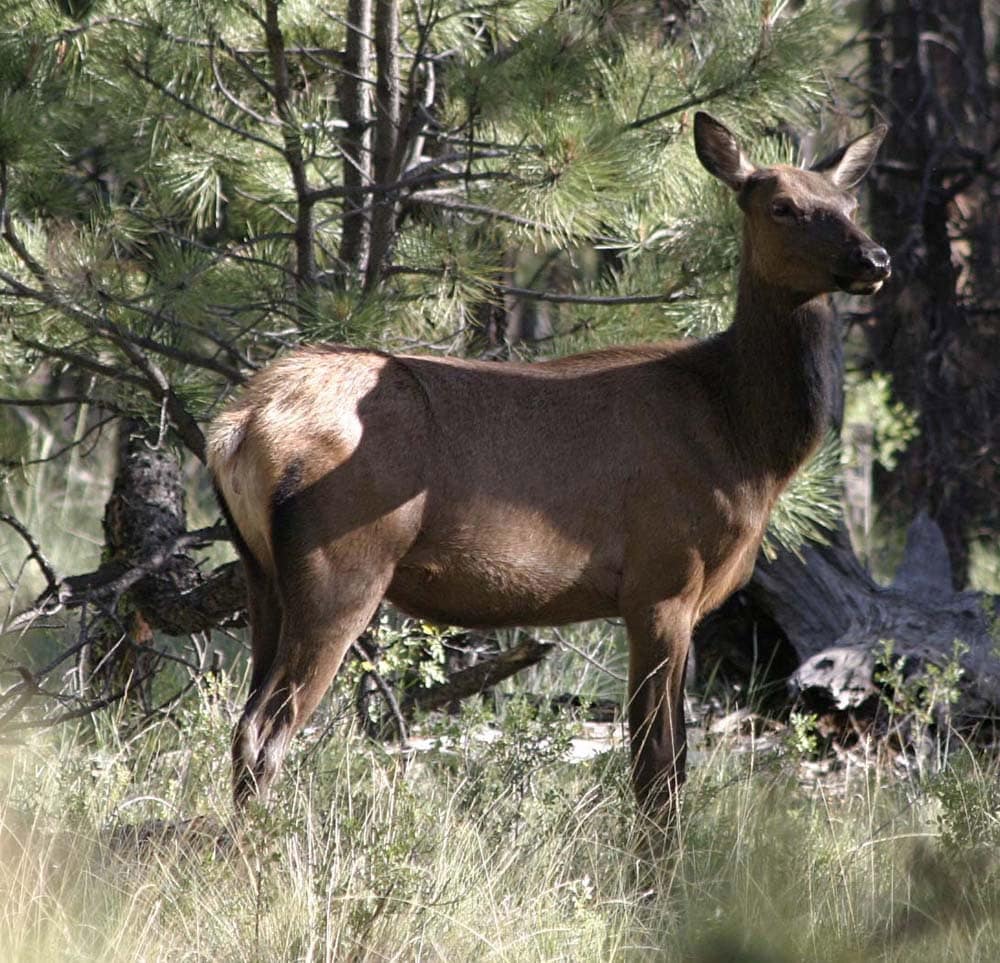 The remaining nights and days of the elk hunt were repeats of the first. We split up to hunt ever further from camp, finding fresh sign and trails for stands, but the elk always moved further out, away from all the hunters, just past where we thought they’d be. Each day ended with a campfire dinner and strategy session, and every cold night I was alone with a universe of stars and my own musings in a silent world punctuated with the howls of coyotes.

On the last morning, the four wheel drive in Ken’s truck failed to engage, and we couldn’t follow Craig to a spot where he’d seen a good number of cow elk the previous afternoon. Craig continued on, and Ken and I troubleshot the 4WD problem for a while without success, then moved to our second-choice spot, where we got skunked. 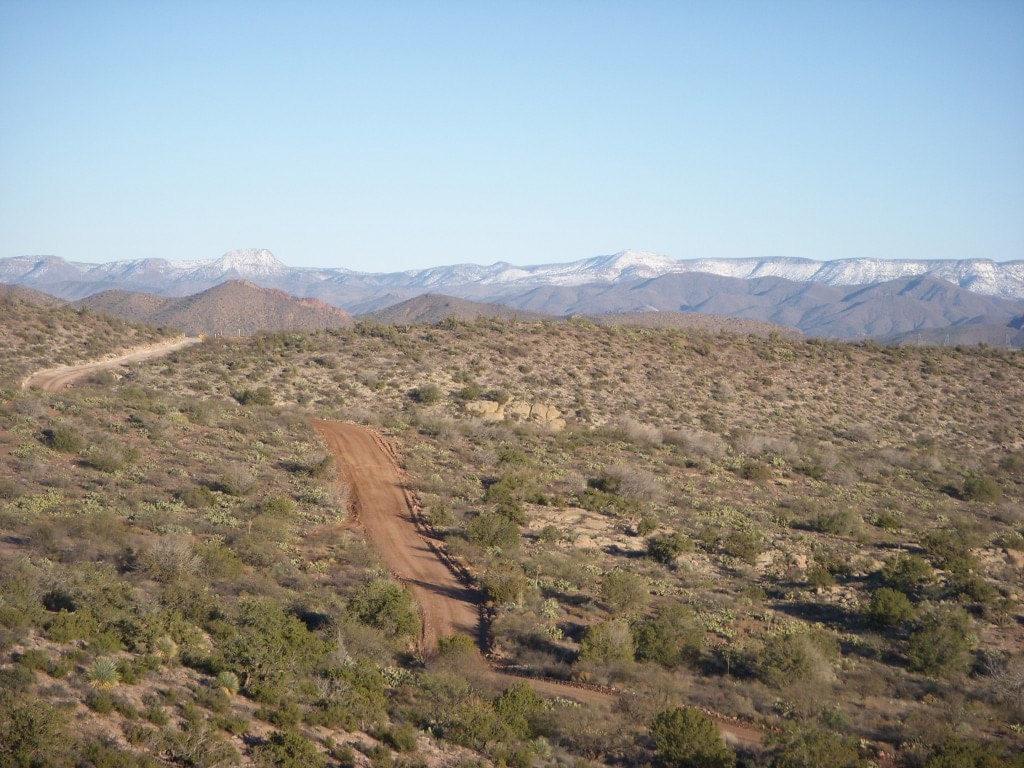 Craig returned to camp in a couple hours with a cow elk.

“I shot this one at 70 yards,” he said. “They were as thick as roaches. You shoulda been there.”

For years after I shot my first cottontail rabbit as a kid, killing an animal always caused me an odd mixture of triumph and remorse. The decades of hunting since then have changed that; the triumph is replaced by gratitude, though the twinges of remorse remain. This hunt there was no remorse – and no elk in the freezer, so it was a failure by the standards of some. But the gratitude is still there, and in some curious way the gratitude brings a sense of success. 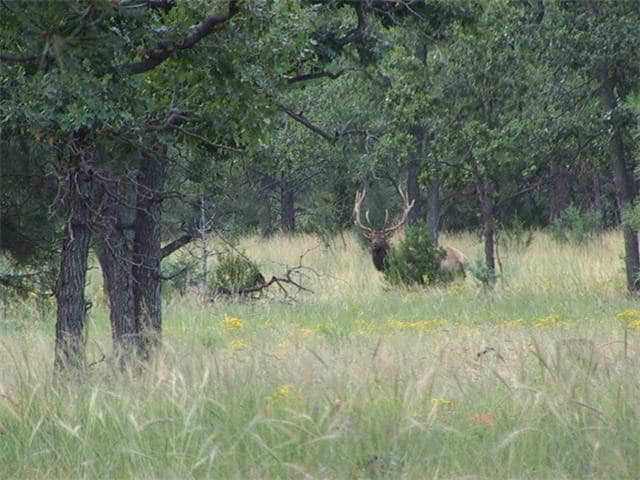 Bagging an animal is my goal in hunting, but my purpose is to be out there, hunting. My purpose is to stay connected to reality while living in an abstract culture at odds with my evolutionary programming that requires me to hunt.

The elk and the starry Arizona nights keep me in reality, and for that I’m grateful, for one day I will hunt no more, whether because the elk are gone or because I am. The camaraderie of a hunt camp and food shared with fellow hunters is another connection, another reason for gratitude. Elk steaks in the freezer are just a bonus. 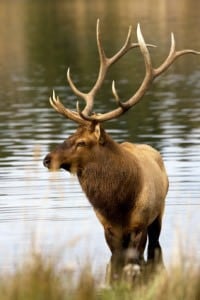 Still, I hope I get that bonus, instead of just a bonus point, next season.