The Three Families: Choosing the Best Type of Gun for Your Home's Defense

With news reports of armed home invasions increasingly common these days, it’s only natural that a conscientious homeowner or renter would want to prepare for such an unpleasant possibility by heading over to the nearest gun shop and investing a little bit of his or her hard-earned money on a firearm.

Many choices await a potential gun buyer, and with the tactical and self-defense gun market getting more expensive than ever, the possibility also exists to spend $1,000 and up on a self and home-defense firearm. Most gun shop workers are knowledgeable about which guns are suitable under various circumstances, but it can be really hard to figure out exactly what gun is right for your situation. Choice is a good thing however, and a little bit of self-reflection can go a long way to help you make the right decision. 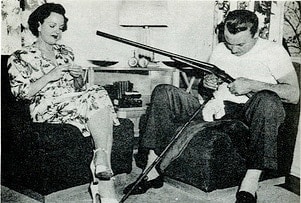 So, whether or not you plunk down some serious green for a new gun or you press a gun you already have into service, here are a few guidelines to follow when you select a firearm for defense:

There are many opinions about what guns are appropriate for home defense and thought it may seem superficial to the gun literate, good candidates for home-defense weapons come from all three big families — and a look at each is a good way to start your search.

Few guns are more reliable or powerful, especially at short range than a 12-gauge pump or a side-by-side shotgun. The shorter the barrel, the better for maneuvering in tight quarters like hallways or stairwells. Shotguns are easy to use, easy to practice with and easy to get on target (in close quarters, possible very easy). This reputation means the gun industry is all too eager to play up this function with supplements. For example, most of the big ammunition manufacturers make shotgun loads for self-defense. The key here are loads that offer sufficient stopping power but won’t over-penetrate, meaning the projectile is less likely to travel through your target and hit unintended targets. Textbook examples: Remington 870; Stoeger Coach Gun. 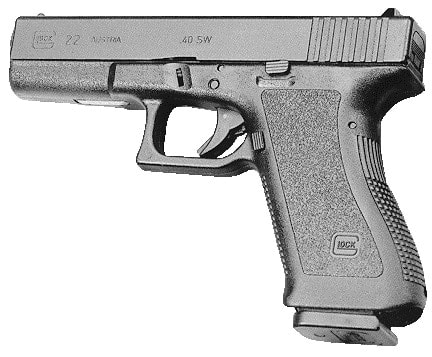 Many semi-automatic handguns and revolvers can be ideal for home defense. Simple is better. Handguns should have easy-to-find and easy-to-use controls. You should choose a caliber that can readily stop an intruder but still be easy to control and keep on target with practice. Like shotguns, purpose-built self-defense loads are available in most common handgun calibers. Textbook examples: Sig Sauer P226, Glock 22, Taurus Judge. 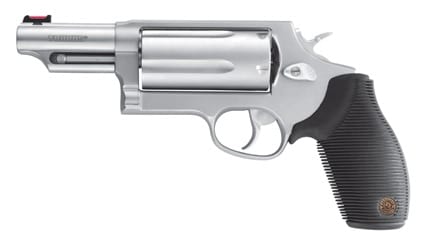 Some schools of thought in the gun world suggest that a handgun is what you use until you can get your hands on a ‘real’ gun aka a rifle. For home defense purposes, shorter carbines are likely more suitable for maneuvering in close-quarters than say, a longer hunting rifle. Once again, simpler is better. Controls such as the bolt, magazine release and trigger should be as intuitive as possible to allow for safe and effective handling.  In addition, many carbines are available in popular pistol calibers, as well as more powerful rifle calibers like .223 and 7.62X39 mm. Textbook examples: AR-15 (multiple manufacturers), Beretta Cx4 Storm.

Tactical needs can vary from household to household, and opinions differ on what guns are best for home defense. Personally I prefer to keep my Remington 870 shotgun close at hand to defend my castle. An extended magazine tube puts six-rounds of potent 12-gauge 00 buckshot at my disposal, capable of stopping just about any threat you’d face in the USA.   Weapons retention can be an issue with long guns: the longer the gun, the more of a chance it’ll bump into something and the easier it is for an intruder to grab it. An 18-inch barrel makes this gun easy to handle in close quarters and mitigates the distance from muzzle to perpetrator.  Pump actions are famously reliable and the 870 also fires rifled slugs (however, shotgun slugs pose the risk of over-penetration) adding another choice for home protection and another choice for life in general because the Remington can also be used for hunting. When you get down to it, from the three families I’d be hard pressed to think of a representative with more reliable stopping power than certain shotguns like my Remington 870.

Because of their portability and ease of use and concealment, handguns top the list for many home-defense shooters. Revolvers and semi-automatic pistols can be stored safely just about anywhere and quickly accessed to meet an unexpected threat (and rarely are there expected threats). A host of after market manufacturers make lights and laser aiming modules that can fit virtually any make of handgun, providing more positive target acquisition in low light conditions. Handgun ammunition in calibers 9 mm and up offer proven stopping power, and many semi-automatic handguns can be used with high-capacity magazines, offering more shots to deal with potential threats.

And in the scope of my experience few guns are more reliable and easy to use than double action revolvers. The main drawback for some is you have to coddle them more.  Make sure you keep your handguns (all guns really but particularly handguns) are clean and well oiled, particularly semi-automatic handguns. Poor maintenance can lead to poor performance like jamming and feed malfunctions. Also, before buying a handgun for home defense, it’s important you shoot the gun. The gun you choose should be one that you are most comfortable with. 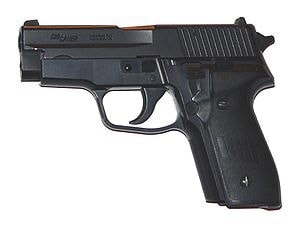 Rifles are considered by many to be too unwieldy for home defense, especially in an urban or suburban environments. If you live on a few acres where you may have to deal with threats at medium and long range, a rifle may be a more appropriate choice for you. While stopping power is not usually a problem with rifles, over-penetration is more likely to occur. Many would consider a long, high-powered hunting rifle a poor choice for home defense, but if it’s the only gun you have on hand… 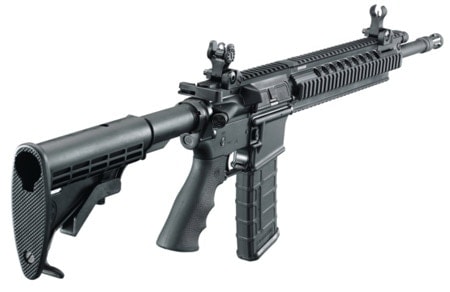 If a rifle must be used for home defense, a shorter carbine rifle is probably your best bet. These rifles are shorter and more easily controlled than longer guns, and are often available in popular home-defense handgun calibers like 9 mm, .40 caliber and .45 caliber.  Military-style M4 carbines are also a popular choice for home defense like AR-15s in .223.

Knowledge is key when choosing a gun for self-defense. Talk to your friends, fellow shooters and hopefully a tactical expert about what does and does not work for them. In addition, shoot before you buy and consider how well the gun will function to meet your specific home defense needs.