Yesterday, the UN Security Council, in a measure called Resolution 1973, authorized a coalition of armed forces to proceed with a high-risk intervention to protect the rebel capital of Benghazi, including but not limited to military action and airstrikes targeting Libyan tanks and heavy artillery. Both the White House and foreign diplomats have reported to media outlets that a multi-national coordinated military effort to overpower a small group of forces loyal to Colonel Muammar el-Qaddafi could be initiated within a matter of hours. 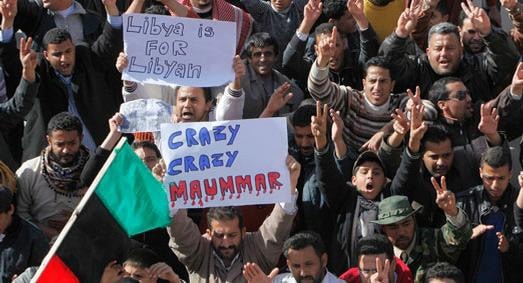 Proposed by the UK, France and Lebanon, Resolution 1973 passed with a 10-0 vote including the “ayes” from United States, Australia and Canada after days of trenchant debate both the nation’s capital and capital cities around the world.  China, Brazil, Germany, Russia, and India all indicated abstentions, with Russian officials stating they have uncovered no evidence that Qaddafi is mounting a counterassault. 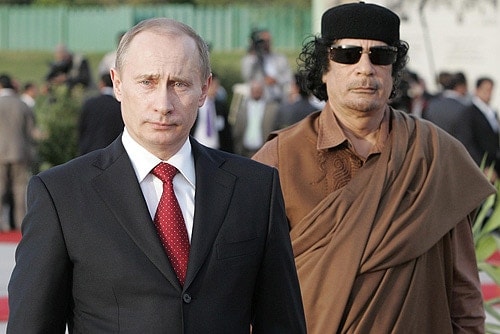 Written in wide terms that permit for a broad range of military actions (including the mother of all diplomatic green lights, “by all necessary measures” to protect citizens) the Resolution also delineates boundaries for a no-fly zone in the North African country, effectively cutting off all economic aid to the Libyan despot. 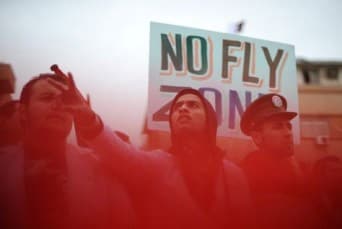 The debate over whether or not it was justified for the international community to intervene was induced from pleas for help from Libyan and other Arab countries.  The third domino to fall in Northern Africa, Libya’s uprising, which began in February 2011, was clearly encouraged and modeled after popular protests in Egypt, their neighbor to the East and Tunisia, their neighbor to the West.  By early March most of the country had slipped from Qaddafi’s control with many members of the military supporting protestors or defecting and leaving the country.  This week however saw soldiers remobilize for a counterattack under the aegis of a coalition still loyal to Qaddaffi. In a rotating cast of culprits, Qaddaffi, for his part, has pointed his finger at “The West”, Israel and Al-Qaeda at different times throughout this crisis as the motivating force behind the uprising.  Wide-eyed speculations culminated in what US intelligence forces believe to be a duplicitous cease-fire announcement. 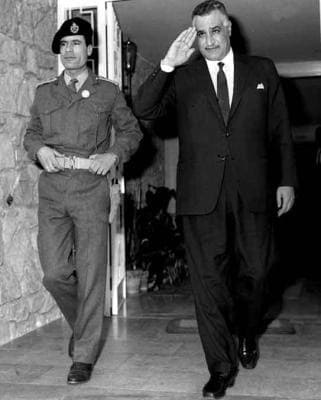 Addressing the nation he has ruled since 1969 via a radio call-in program in the nation’s capitol, Tripoli, Qaddafi threatened civilians, stating, “We will come house by house, room by room. It’s over. The issue has been decided.  We will find you in your closets. We will have no mercy and no pity.”  He offered amnesty to those groups who surrendered but announced yesterday his troops would commence an assault on Benghazi that night. After Resolution 1973 passed however, the tone coming from the ex-dictator’s camp was decidedly softer. Khalid Kaim, Libya’s deputy foreign minister, bizarrely reported that the Qaddafi government was in step with the UN resolution (worded as if they believed it was in support of Qaddafi), but warned against foreign countries’ arming the civilians, professing it just, “invit[es] Libyans to kill each other.” 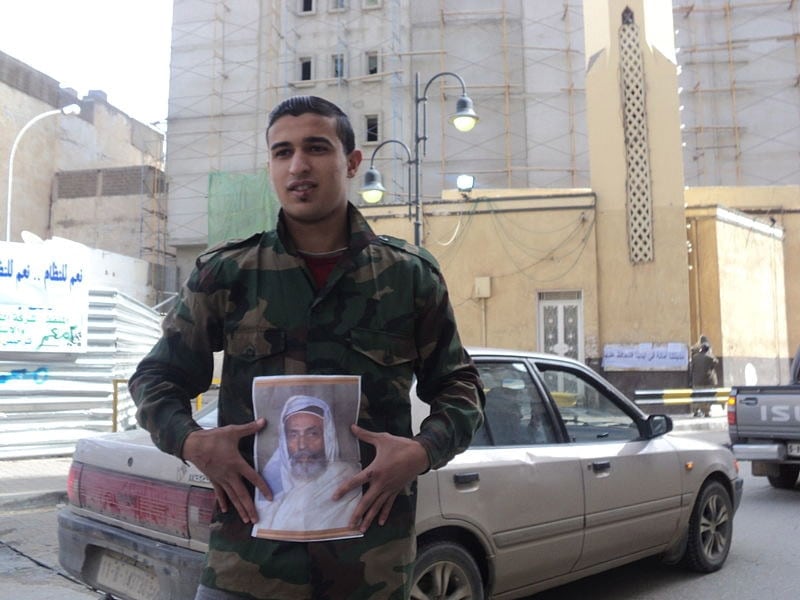 The Qaddafi government also purported to be enacting a cease-fire, but with the caveat that they need to “talk to someone to agree on the technicalities of the decision.” When intelligence reported that loyalist combatants had closed into within 100 miles of Benghazi amassing in the town of Ajdabiya, the international community prepared to act. 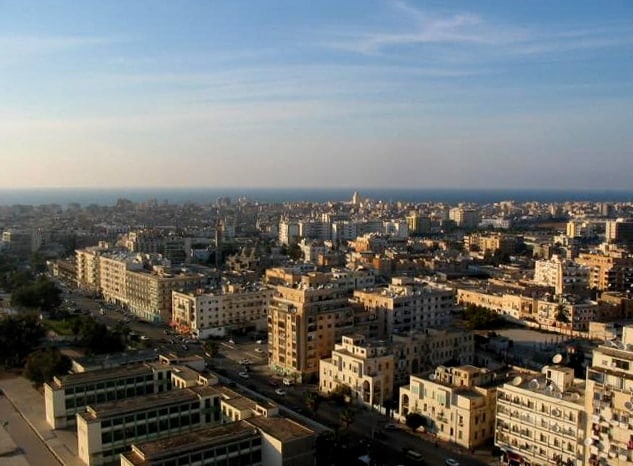 The rebel stronghold of Benghazi, where a large collection of citizens protesting Qaddafi’s totalitarian regime are holed up after taking the city in February, burst into celebration when it was broadcast the UN resolution had passed. 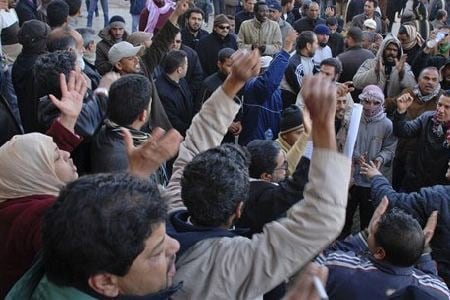 Imam Bugaighis, spokeswoman for the “rebel” council in Benghazi reported to members of the Western press, “We are embracing each other.  The people are euphoric. Although a bit late, the international society did not let us down.”

However, distressing discourse in Washington left questions about who would quarterback the initiative and, of crucial importance to the success of the operation, the role of the United States, largely where they lay. 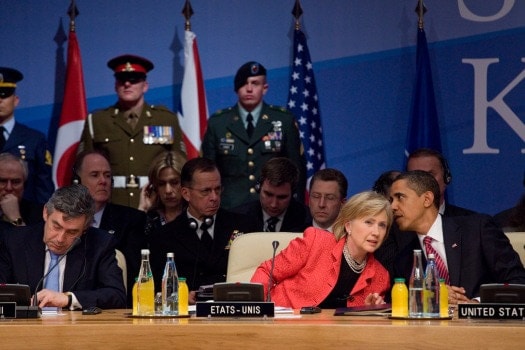 Subsequent to the passing of Resolution 1973, President Obama convened a meeting with his National Security Council to discuss the military options. He also conferenced with British Prime Minister David Cameron of Britain and French President Nicolas Sarkozy of France (one of Libya’s most vocal critics). 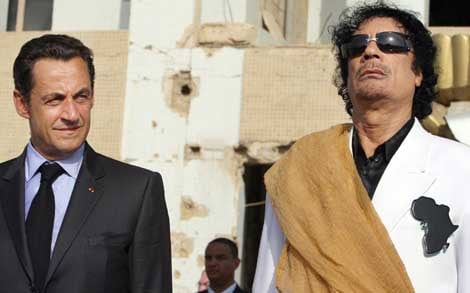 Reportedly the United States role in this prospective conflict was a major sticking point throughout the debate to international military forces entering the country.  American officials were extremely reluctant to engage in yet another armed conflict in a Muslim country for litany of logistical, economic, political and cultural reasons.  But, with verified reports of Qaddafi’s troops on the move towards strategic civilian controlled positions, the moral obligation to safeguard their lives and the political obligation to the UN quieted any nagging doubts. 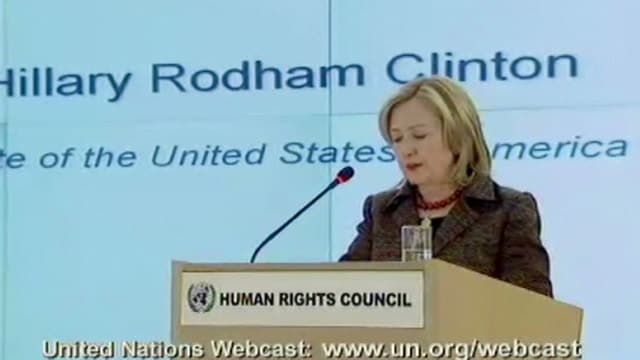 Overseeing the region in Tunisia, Secretary of State Hillary Clinton stated, “There is no good choice here. If you don’t get him out and if you don’t support the opposition and he stays in power, there’s no telling what he will do.” 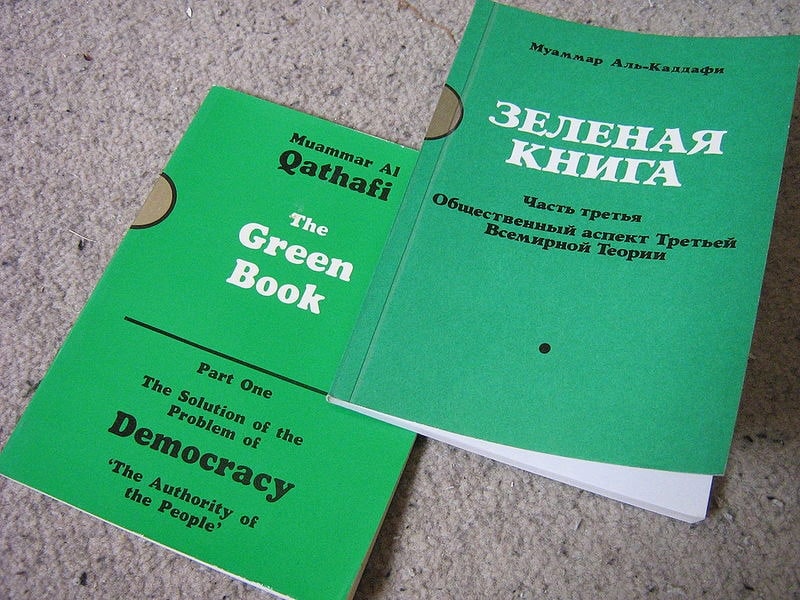 In reference to the “terrible things” Qaddafi could do if he resumed power, she voiced on Arab television some of the strongest condemnations of “The Brother Leader” coming form the West since Reagan, stating,  “It’s just in his nature. There are some creatures that are like that.”  These remarks drew thunderous applause from Arab crowds. 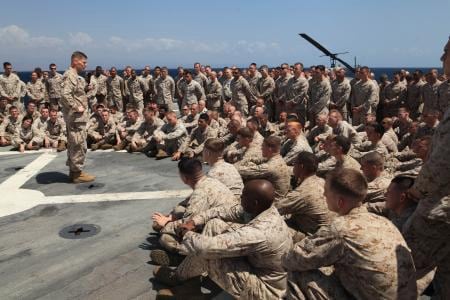 At the moment, the US has adequate resources in the region: about 400 Marines are sitting in the Mediterranean aboard the Kearsarge and the Ponce, both amphibious battleships, ready to deploy upon command.  The region also hosts US signal-jamming aircraft, Awacs radar planes and an unknown number of surveillance craft. 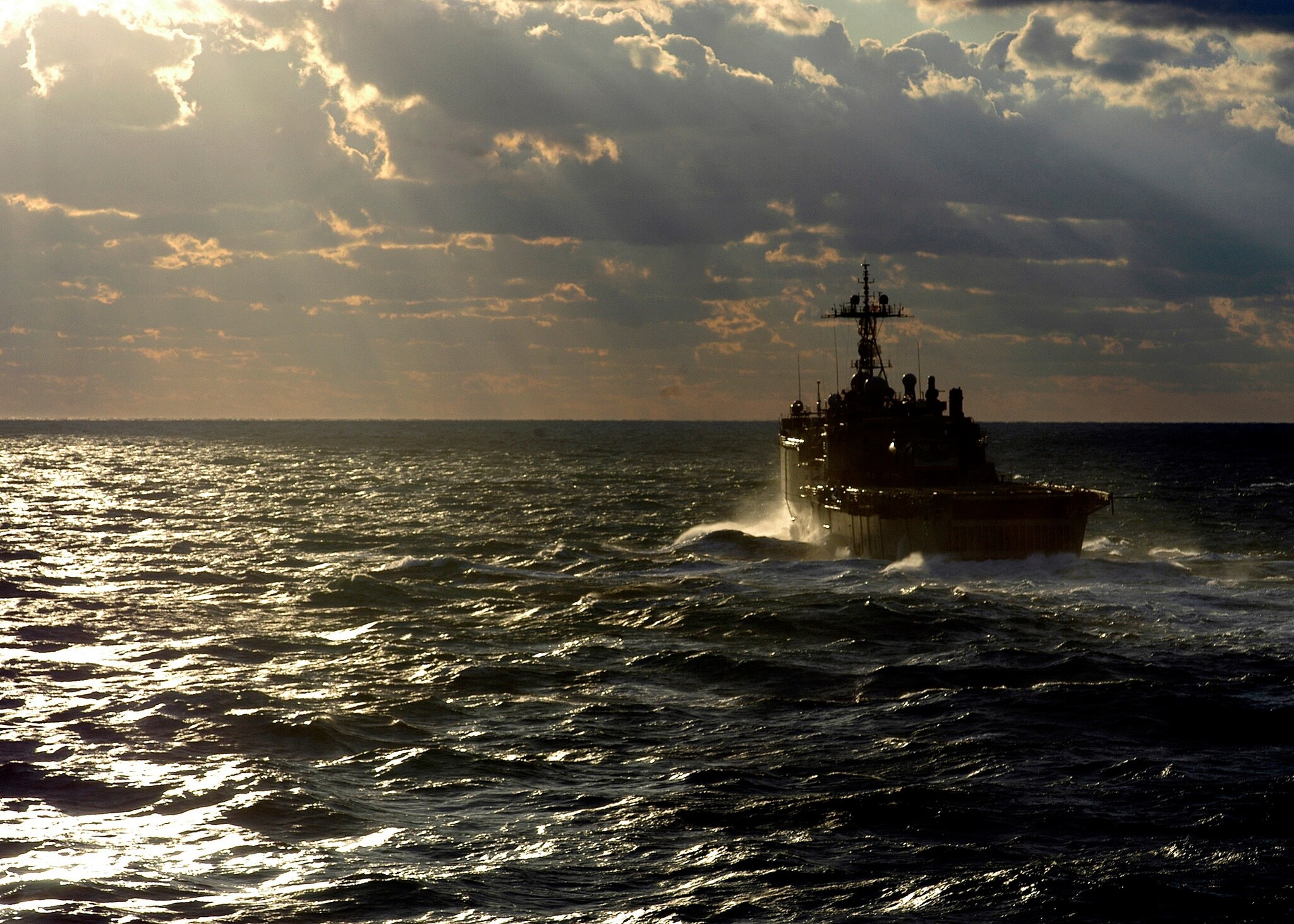 A director at the US Council on Foreign Relations, said: “It’s going to be tougher to stop Qaddafi today than it was a week ago. The issue is not going to be settled in the skies above Benghazi, but by taking out tanks, artillery positions and multiple-launch rocket systems on the ground.”

Diplomats in Britain, France and the United States have all been adamant that operations not be led by NATO and that Arab League provide the majority of military forces (including the possibility of an occupational army) and help finance any military actions. 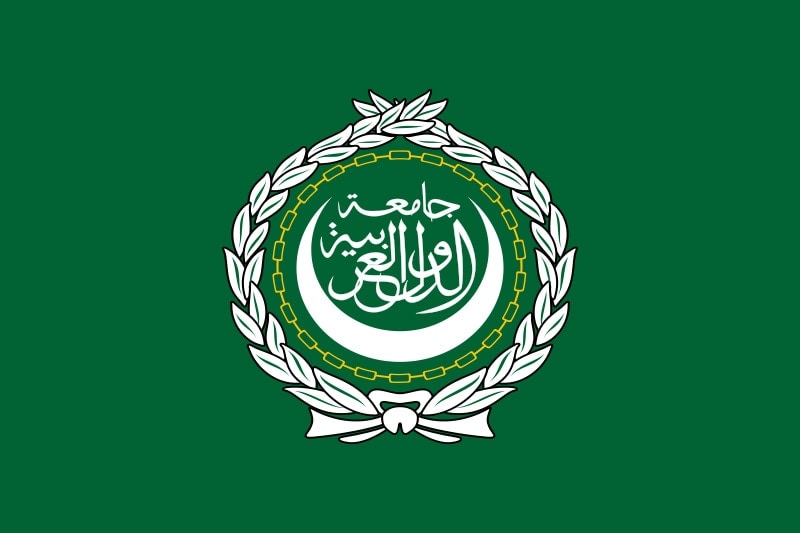 The Resolution itself emphasizes the role of the Arab League in military any action and describes a no-fly zone enforced by Arab powers as a prerequisite for US participation in the program.  This is likely an effort to curb military expenditures (which Reuters put at cost of over $1 trillion since in 2001), decrease US man-hours and eliminate the possibility for regional backlash. State Department’s highest-ranking career diplomat, Under Secretary William J. Burns, has totally ruled out deploying US ground troops. 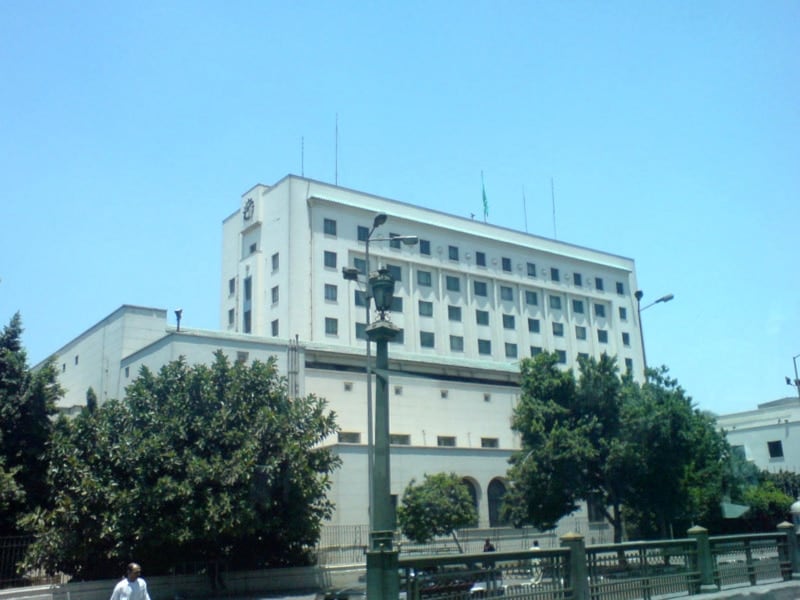 Qatar and the United Arab Emirates indicated they will take lead, while Jordan and Saudi Arabia are still considering participating. In solidarity, shaky Egypt will most likely play some role in the conflict.

For the almost 200 members of the United Nations and the varied countries they represent, Resolution 1973 is paramount to a trial by fire on the peacekeeping organization’s ability to prevent atrocities against civilians. Accused of toothlessness when it began and with the ghosts of Darfur, Rwanda and Bosnia (which also saw no-fly zones in the 90s) fresh in the minds of many, failure in Libya could caste serious doubt on the effectiveness of the organization.