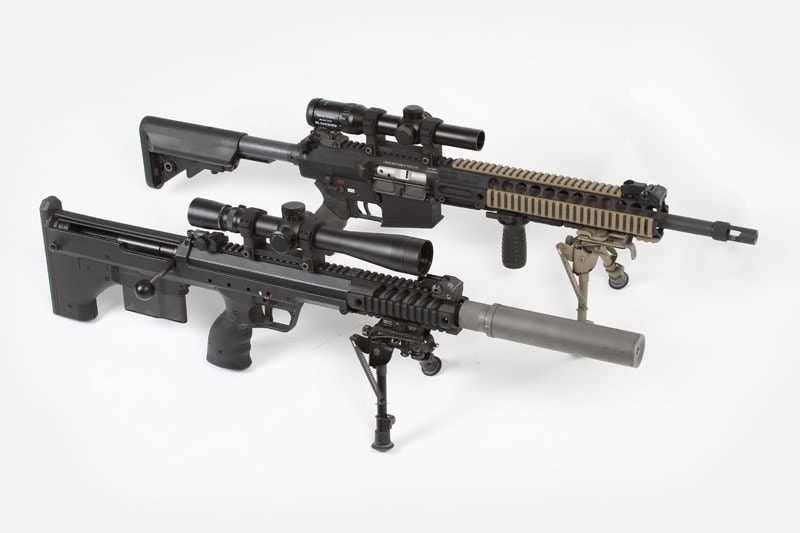 Despite the fact it’s only been four years since Desert Tactical Arms threw its coming out party, it has been noted by many a distinguished “industry writer” that the Salt Lake City based weapons manufacturer shows poise, grace and character far beyond its years.   Possibly most indicative of this is their new SRS Covert weapons system, a gun that turned heads at both the SHOT Show and IWC Classic, with a few able observers crowning the super-succinct sniper rifle the Belle of the Ball.

Desert Tactical drafted the Stealth Recon Scout (SRS) Covert Rifle on demand for police and military snipers with the goal of creating a modular weapons system that featured unequaled levels of conceal-ability and maneuverability for a long distance firearm. And indeed, the rifle’s 26-inch overall length treads in bullpup length territory (a point reinforced by an actual bullpup configuration) while a 16-inch barrel has proven capable in field tests of 0.5 MOA at up to 1000-yards and effective ballistics at up to 1800-yards. The rifle fires a 300-grain .338 Lapua load down field at 2250 feet per second.

The system comes chambered in.300 Win, 308 Win and, as mentioned, .338 Lapua Magnum along with a field-friendly conversion kit, though caliber changes involve a swap of barrels, bolts and magazines.  That’s a lot to carry.  The gun does play nice though with other parts from other models in the SRS line as there was an obvious attempt to machine the guns with a comparative degree of standardization (or at least as “standardized” as it gets in the world of firearms). 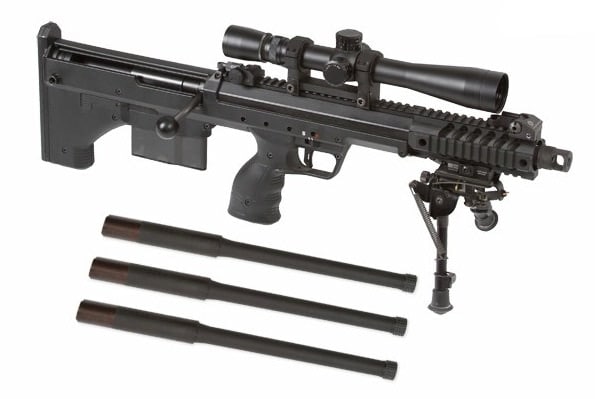 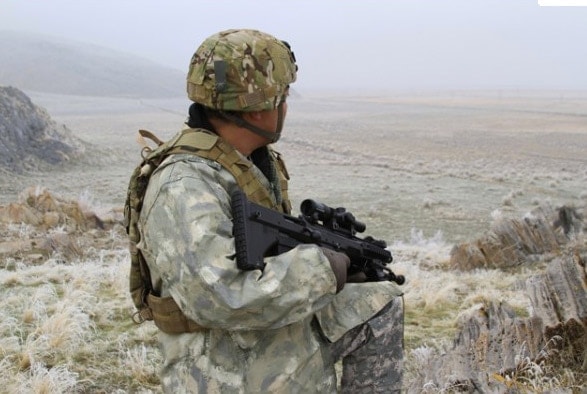 For all you purists out there, the SRS Covert makes use of a rotary bolt-action. The aluminum alloy receiver fits a single stack box magazines and holds five rounds for all calibers. The barrel is free-floating; the trigger is fully adjustable with a manual safety just above it; the molded polymer buttstock features spacers to modify length of pull. Manual safety is conveniently located above the trigger.

There are no iron sights on the SRS.  A integrated Picatinny rail on the top of the receiver and quad rails around the barrel accommodate a Schmidt & Bender 5-25X telescope sight with proprietary rings and base. It can also be ordered with a folding bipod, carrying sling with quick-detach swivels and for those stamp holder out there, a detachable suppressor.

As is often the case these days, small manufacturers like Desert Tactical Arms tend to neglect the civilian market when they introduce these high-zoot military inspired numbers in favor of lucrative contracts with LEO agencies or domestic and foreign governments.  Fortunately, that ain’t the case here: Desert Tactical is also selling a civilian target shooting and hunting model, aptly names the SRS “Hunter”, with all the features of its military-grade cousin.

New units cost about $3,200, so start a “swear jar” or something if you’ve just got to have one.  You can take a look at Desert Tactical Arms SRS Covert Rifle along with a gaggle of other products right here.