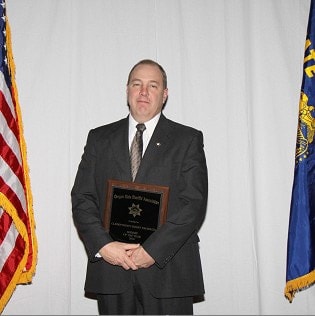 Bergin is president of the Oregon State Sheriffs’ Association, one of many gun rights groups and sympathetic policymakers who sponsored the measure.  Provisions under House Bill 2787 forbid public entities from releasing information that identifies who is licensed to carry a concealed handgun.  The proposal was met with resounding endorsement in the House and passed in a 42 to 18 vote.

Currently, Oregon adheres to state “public records law,” which reasons that any information collected by the state in service to the public, must be available to the public upon request for inspection.  This includes Oregon State concealed handgun license applications, which already contain the results of federal background checks, but of more legal importance also asks that applicants provide character references, implicating third and possibly unwitting parties, and further information regarding previous crimes and drug use, which could be argued conflicts with the 5th amendment.

In the past, many applicants kept their information private by simply claiming personal safety reasons.

The proposal saw support from both sides of the aisle, even receiving bipartisan sponsorship from Republican Representative Kim Thatcher and Democratic Representative Jeff Barker, who is himself a retired police officer. Democratic Representative Mitch Greenlick from Portland voted against the bill, citing that the bill was too restrictive: under the bill accessing this information will take a court order, the consent of license holder or for “criminal justice purposes,” which likely also means a court order.  A companion bill is making its way through the Senate.

In a drama that mirrors events unfolding in Illinois today, last year the Oregon Court of Appeals demanded that the Jackson County sheriff’s office begin a two-year project of both cataloging and subsequently divulging the names of Oregon state CCW holders and applicants.

The order was prompted after a regional newspaper, The Medford Mail Tribune, put in a formal request for the information.  Adding an element of controversy for academics worldwide, the newspaper explicitly said it would not publish any name on the list, but rather needed the figures for independent research for an article.  The article would have examined the significance of guns in the classroom and writers were looking to find out how many teachers in the state of Oregon are also CCW-holders.

In a prophetic statement to the press after the story broke in 2010, Mail Tribune Editor Bob Hunter said, “I’ve said it many times, but I’ll say it again: If the sheriff or anybody else wants to make concealed weapons permits exempt from public records laws, they should go to the Legislature and ask them to do it.”
It seems that lawmakers were listening.