Kel-Tec’s new KSG bullpup Shotgun provoked quite a response from the Guns.com crowd when we threw it some ink a couple of months back. Depending on who you ask, Kel-Tec is either a token of the Second Amendment’s authentic spirit—pumping out sinister looking heaters, meant for nothing more than dragooning thugs off your porch, keeping the King of England out of your face and priced so even the unemployed can afford them—or a token of all that has corrupted America’s once pure-as-the-driven-snow gun culture—pumping out chintzy, overblown range toys with more pizzazz than function, appealing only to insecure folks with vigilante ideations, basement dwellers, chicken littles and kids who just plain don’t know no better. 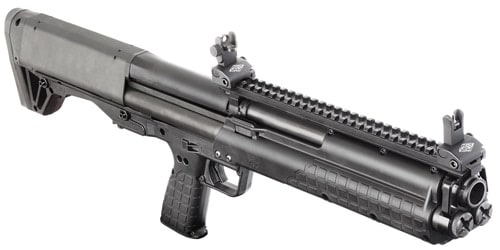 That said, we like Kel-Tec, if not always their guns, then at least the thought of them.  Kel-Tec makes fun products that will kill an intruder if need be, and that’s something even Saint John (Browning) himself would appreciate.  And now it looks like they’ve become a well of inspiration for gunmakers around the world.

UTAS is a Turkish firm that got the seal of approval from the NRA both in 2006 and 2007 when they took gun of the year honors. Their newest laboratory monster is the UTS-15 shotgun—a polymer, dual magazine tactical nightmare which looks suspiciously like the KSG, only decidedly more high-end.  This is probably owing to the fact that, like a lot of overseas manufacturers, UTAS isn’t all that interested in the civilian buyers, rather they put a lot of their energy in securing LEO and military contracts. 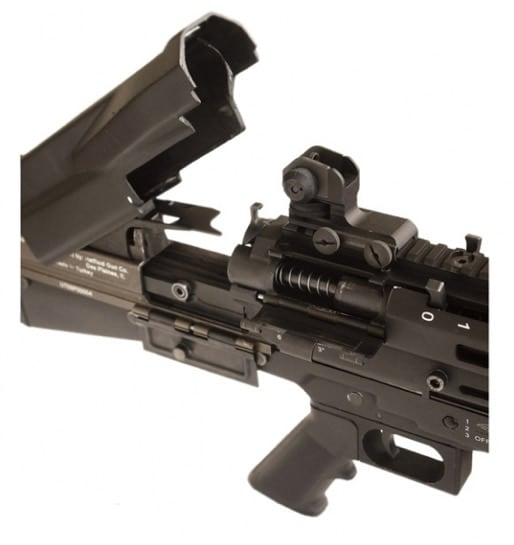 The 12-gauge pump chambers 2 ¾ and 3” shells, and holds 15 total of the former size.  Like the Kel-Tec there’s a switch to alternate between tubes, but unlike Kel-Tec’s first stab at a scattergun, the UTS-15 can be set to alternate automatically between the two tubes, meaning you can fire all 15 shots without stopping to throw a lever.  It also has shell counters so you know how many crowd-controllers you have left.  Up its nose its got a rifle spreader-choke that throws an 18-inch pattern at 15-feet. 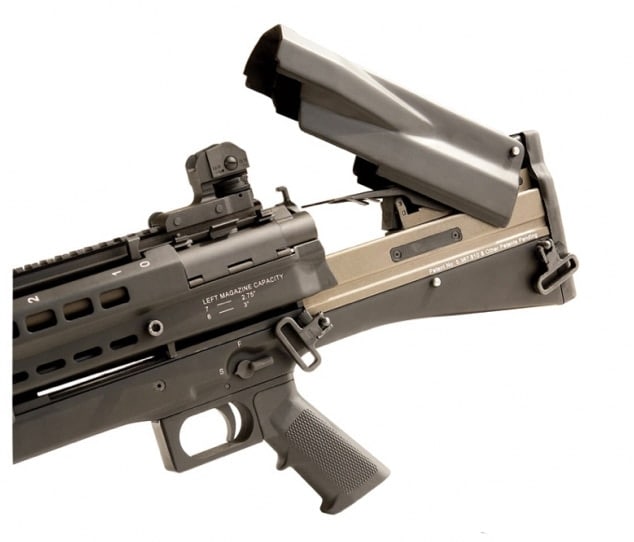 The company boasts it is the first ever shotgun to have a 100% polymer lower receiver and further claims the gun is 80% carbon fiber all told.  What this means is its light and you can treat it like some mindless pack animal with little danger of affecting performance. A flatter than your niece’s Christmas recital black matte finish gives it that no glare SWAT team look and anti-corrosion coating on the few parts that are stainless steel promises to up the guns shelf-life between cleanings.

And dig this—there is a button operated laser and light built right into the lower receiver.  It comes out the factory with iron sights and a full Picatinny rail fro other accessory options.  The UTS-15 is 27-inches long and weighs only 7.2-pounds (the beauty of making a plastic gun). 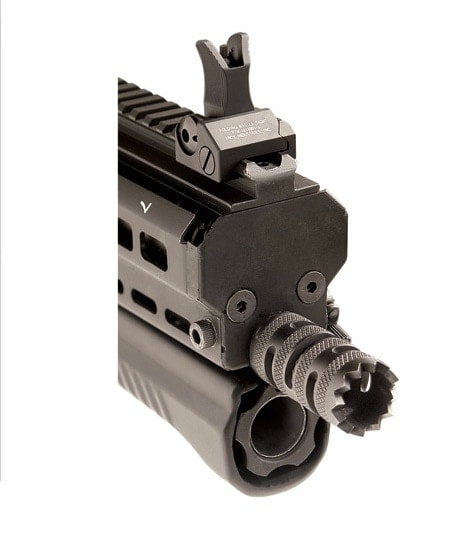 And if you’re tax-paying American, there’s no way your getting one sans expatriating to Canada or some such nonsense because the UTS-15 doesn’t qualify as a sporting arm so BATFE won’t let the UTAS export them stateside.  So pick a KSG, buy American and dream of what it could be.  If you want to drool over the UTS-15 or other UTAS products you may or may not be able to own.