“It’s bigger, its better, its new and improved, faster, and has enhanced performance!”  It’s a list that goes on and on for many products on the market today for virtually everything we buy. And most of the time its little more than “Madison Avenue” hype.

However, once in a while, there are improvements, thanks to innovative high technology that are going to live up to lofty claims. Such is the case with the new shotgun shells designed for some serious waterfowl hunting from Winchester Ammunition (WA), and it’s called Blind Side. 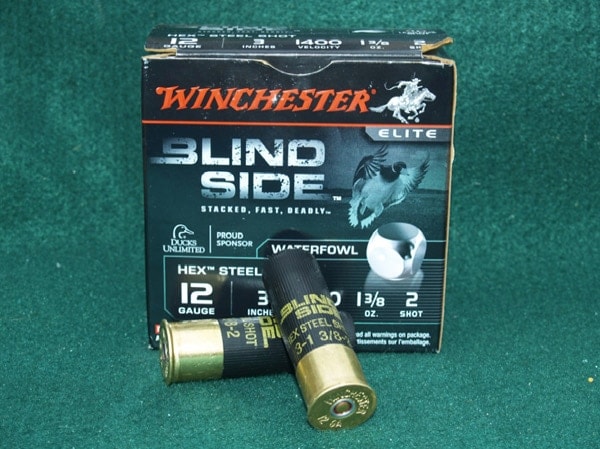 My first introduction to the new ammo was at the Media Day in conjunction with the 2011 SHOT Show out at the gun club in Las Vegas, where hordes of outdoor writers from around the nation and around the world are herded from outdoor exhibits and various shooting ranges to try out hundreds of new product introductions that will be introduced to the shooting public in the coming months. At the Winchester Ammo display, about a dozen other outdoor journalists were on the firing line and testing new shotgun ammo….Blind Side.

Winchester engineers were standing around, smiling like the proverbial Cheshire Cat and explaining that the new waterfowl ammo was a superior duck and goose load, with a host of new technology innovations and that the company was confident that after spending a lot of time designing, testing and perfecting the new loads… the Outdoor Press and the public were going to be impressed.

My hunting partner, Kat and I listened to their mini-lecture and kept nodding  like a couple of Bobble Head dolls, while we waited in line to try the new ammo in a couple of demo Winchester 12-gauge autoloaders. Kat took the first two shots at a pair of clay birds, looked back at me and said with a grimace on her face, “damn, this kicks like a mule!” 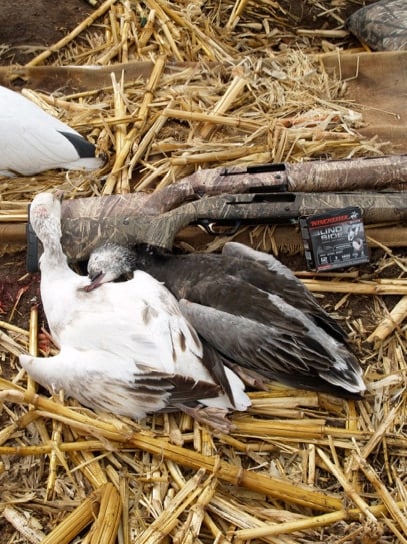 Kat will normally not shy away from a chance to shoot everything and anything, up to the point where I have to drag her off the range, or the maker has run out of ammo! So to see her not liking the new load was perplexing to say the least. She fired one more round, emptied the chamber of the second round, put the gun on safe with the chamber open and quipped, “I’m done, I don’t like it.”

My turn on the firing line, I loaded two rounds and hollered pull. She was right! The 3 ½ inch, 1 5/8 ounce of steel roared out at 1400 feet per second (fps) and left me feeling like I had just shot a 10-gauge loaded to the max. I fired two more rounds and I was also… finished. 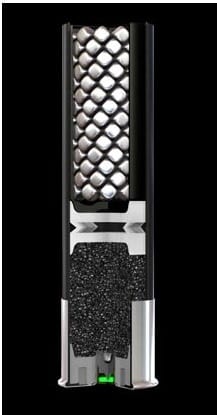 So was the problem the new load or the shotgun? We needed to find out, and the next day we visited the WA exhibit at the SHOT Show to get some answers. What we learned was that Blind Side ammo is indeed a new high tech upgrade to conventional steel shot waterfowl loads. With a public introduction set for June 2011, the ammo is going to initially be offered in either 3 or 3 ½ inch 12 gauge only. Shot size is going to be #2s or BBs. 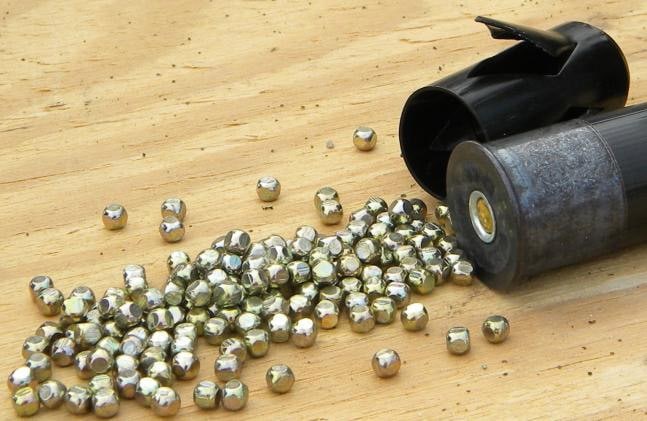 What makes the ammo different from anything out there today is that Blind Side is using a hexahedronical or hexagon (6-sided) shot that is shaped and cut like dice. Instead of being round pellets that simply sit on top of each other, the hex shot literally stacks itself inside the wad and allows for about 15% more shot over conventional steel shells. 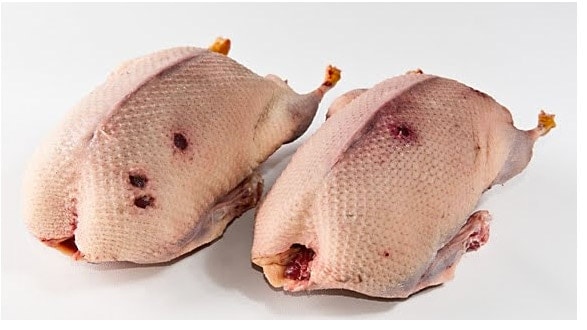 According to WA, this hex shot will cause 250% more trauma on target with bigger wound channels for more killing and knockdown power. At 1400 fps it would be like hitting a bird with high-velocity tumbling bricks, preventing over penetration but maximizing energy. In addition, the new shells have a Diamond Cut Wad for a better and consistent pattern performance, and an increase of about 25% in the kill zone.

When Kat and I go waterfowl hunting, she likes to shoot short, while I like to shoot the longer shots. WA said that the ammo was compatible with everything from an IC choke up through full choke.

A week ago, we had the opportunity to see if the grand claims by WA would pan out in the field, and we headed out to the plains of northeastern Colorado for a guided snow goose hunt with our friends at Webbed Feet Down outfitters along with a Browning Maxus and a Browning Silver shotgun.

Armed with four boxes of 3-inch, #2s, loaded up with 1 3/8 ounce, both Kat and I smiled at each other in the field as we remembered our first experience with these rounds. And, being the consummate gentleman, I told her that she could use the new ammo first, and I’d shoot my tried-and-true 1 ¼-ounce Winchester Supremes. 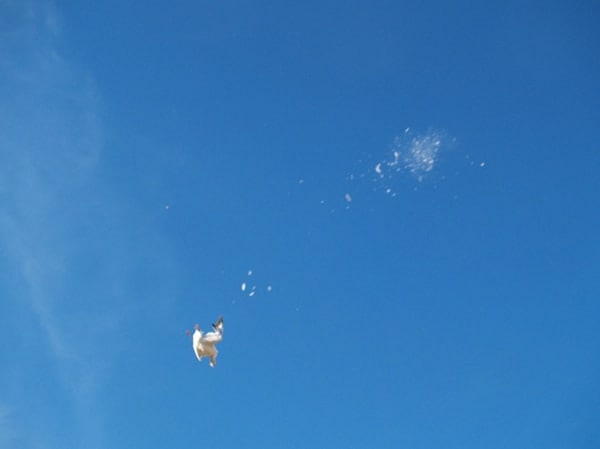 With flight after flight of gregarious snows working our decoy spread and electronic callers, within twenty minutes of shooting, it was obvious that I was getting my butt kicked. Birds at virtually identical ranges were going down like a sack of rocks and hard with the Blind Side shooting by Kat, while my birds would rock with the impact, but then set wing and drift before folding up or gliding down.  As an issue of being fair…. I started whining and said it was time we switched loads! 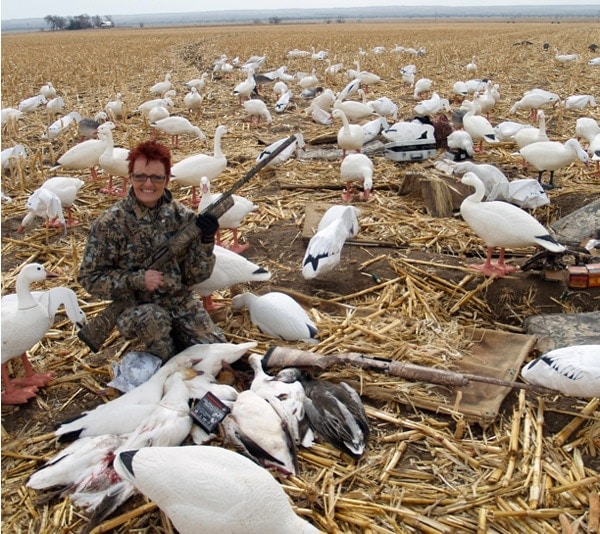 Within the next 20 minutes of firing, it was an amazing difference. My birds were dead before they hit the ground with a thud, while Kat’s birds were going down wounded or not at all.  Turns out, we now both believe our previous experience at the range with the Blind Side shotshells was likely attributed to the gun design, not the ammo

And not too surprising was the fact that Kat then hollered from her pit blind over to me… “I’m done. Give me my Blind Side back, and now!”