We flew into Edmonton International. It’s the last city going north. Then a 220-mile drive got us up to Fort MacMurray, the last town. From there the “winter road” winds to Fort Chipewyan, the last outpost. But it was early spring, so the tractor-trailer trail was soft and pretty much impassable. Fortunately, we only had to travel a few miles past MacMurray, to hunt black bears with Eric Grinnell’s Silvertip Outfitters. 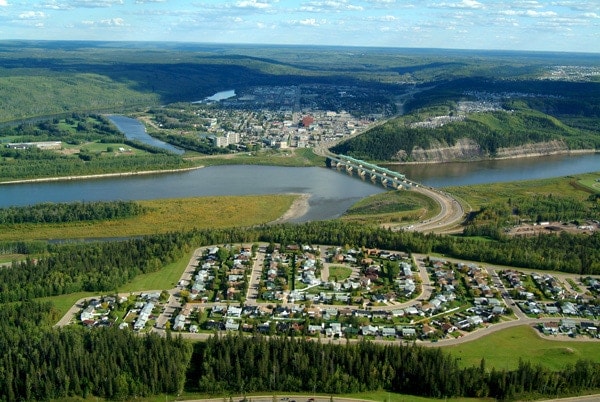 When we got to camp late in the afternoon, Eric’s camp was in the process of being set up on a bluff not far from the great Athabasa River. Bear season opened the following day, and Keith Chandler and I would be the first hunters. In fact, this was Eric’s first camp in the area. He normally hunted the Peace River to the west. This would be a learning experience for all.

The camp was a flurry of activity from the moment we arrived. Guides hurried in and out by ATV, or in Eric’s 4-wheel-drive pick-up, gathering supplies, scouting, baiting and building a tent-camp from the ground up. Smoke poured continuously from the camp stove and the smells of roast beef or vegetable soup would occasionally drift across my nostrils. 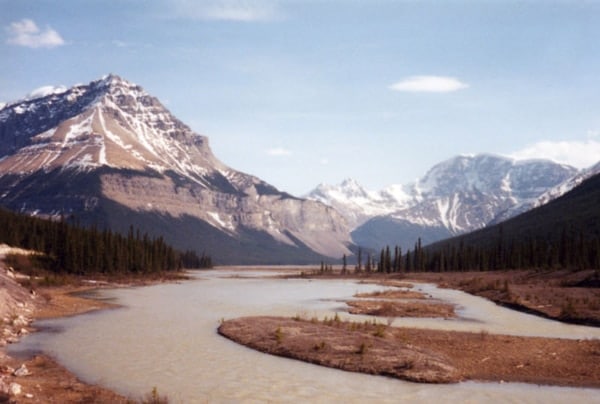 Our plan was to begin hunting the following morning. Keith and his guide Mike Ukrainetz would canoe down the Athabasca, glassing for bears just coming out from hibernation. The banks of the river green up quickly and that’s often the first destination of an awakening bear. A belly full of green grasses helps clean the system quickly. Once their intestines are back in full working order, the bruins turn their attention toward protein – winterkills, live prey and bait piles. 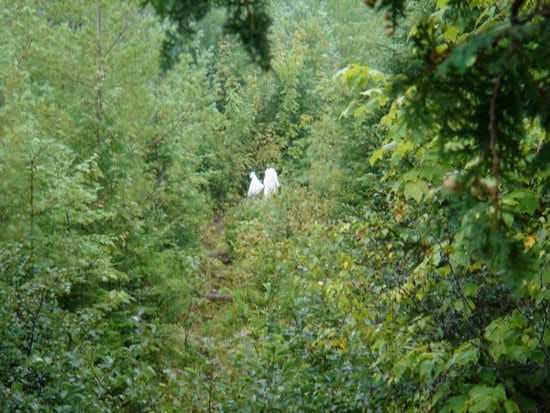 Eric was particular about his bait sites. While many outfitters use fifty-gallon drum and plastic containers, he prefers to present the offerings in a more natural fashion. Baits are covered in limbs and spruce boughs, making them nearly invisible to the human eye. 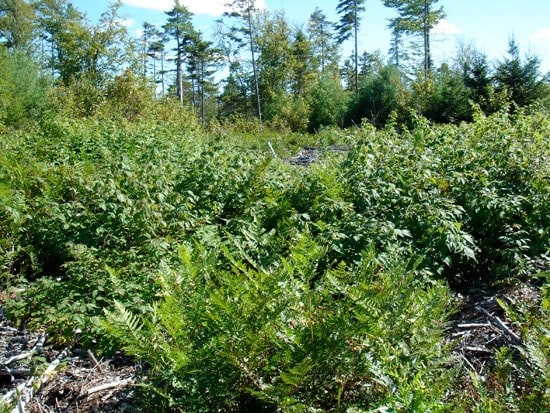 But with the season still early for bait visits, my first day was spent on ATV and foot, glassing for bears on the move. Mike’s brother Phil and I drove our ATVs for hours until I thought my right thumb would finally break off from holding the throttle. We scanned the forest edges, the winter road and many, many miles of muskeg bogs. The soft wet muskeg – a nasty muck covered in grasses, lichens black spruce and Labrador tea – can suck your boots off and hopelessly stick any vehicle that tries to cross it. But the black mud that supports the thick plant life reveals a wealth of tracks. Moose, bear and wolf prints criss-cross the openings, mostly from nocturnal activity. Nevertheless we checked the muskeg constantly and on our second day, decided to spend the last hours of light sitting and glassing over an enormous bog bordered by miles of thick spruce.

I was told the region was full of wolves, but that didn’t mean I’d have an opportunity to fill any of the wolf tags we’d been provided. In fact, Eric assured me that I would be very fortunate to even catch a glimpse of one of these secretive creatures. Simply seeing a bear would be fine, I thought. 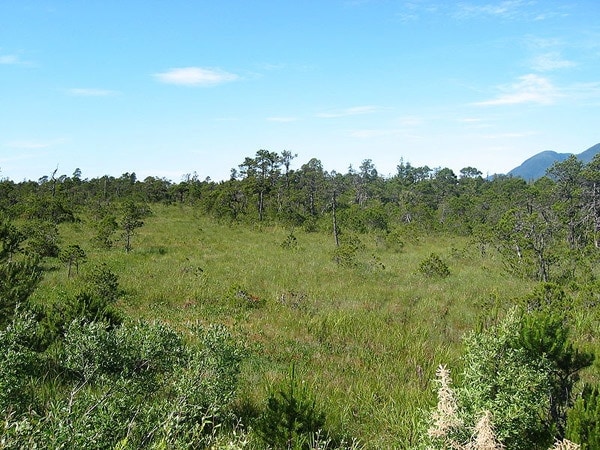 As dusk fell, we sat quietly above the muskeg opening. In the adjacent spruce thicket, a grouse had been serenading us with his drum solo for several minutes when he stopped abruptly. His sudden silence was conspicuous and I strained to hear the muffled sound of footsteps coursing through the woods not fifty feet away. Moments later I turned to see a ghostly gray form approached us from behind. The big wolf, the color of pewter with a face of charcoal, stopped some forty yards away. 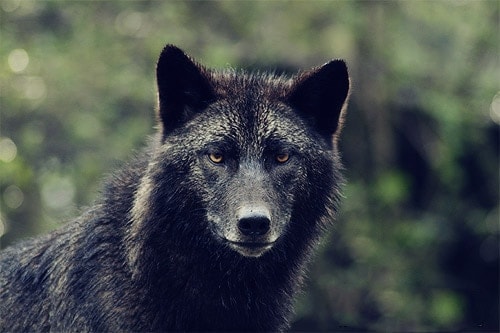 The wolf was well aware of our presence and eyed us intently from the shadows. I had slowly twisted around and propped the .30-06 on my left knee. It was dark enough to see the flash from the barrel when I pulled the trigger. Without losing a drop of blood or a lock of hair, the wolf vanished. Back at camp, the guides all told me it was common to miss a wolf, even at forty yards. No one seems to know why. They told me the local Indians said the wolves have “big magic.” I believe.

The following day, I had a shot at a bear crossing the winter road. I missed. I traveled thousands of miles to northern Alberta, saw one bear, and missed. I hoped I’d have another opportunity but we were early. Real early. Next week, bears would be on every bait site. Not this week. Timing has never been my strong suit. 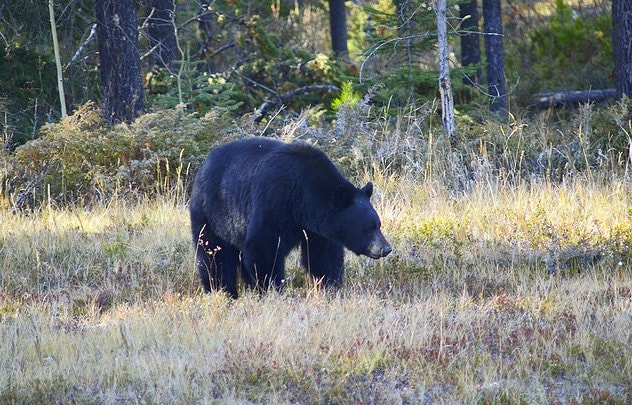 Keith and I spent the greater portion of the next two days riding, walking and climbing with the Ukrainetz brothers as they searched for baiting areas. Finally, just off the winter road, in an old stand of hemlock, spruce and firs, I found where I wanted to hunt. The brushy creek bottom and thickets were heavy with bear tracks and scat. It was as good as we’d seen. And besides, if I wasn’t going to see another bear, I wanted to not see him deep in a beautiful arboreal forest. Our final night in camp was cold and clear. As I flipped through a book in our tent, Mike pushed his smiling face through the flaps and told us to come out and look up. For the next twenty minutes, we stared at the incredible light show directly over our heads. Luminous streamers of green and pink danced and fluttered like curtains in a breeze, hanging down from the heavens to what seemed only a few hundred feet above our heads. I’d heard the Northern Lights were incredible, but seeing was believing.

Later that night I was awakened by the distant high-pitched howl of a timber wolf. A moment later, another wolf replied, this time closer to camp. For a few minutes, the night was filled with the harmony of a dozen or more. As the hair tingled on the back of my neck, I slipped a little deeper into my sleeping bag. 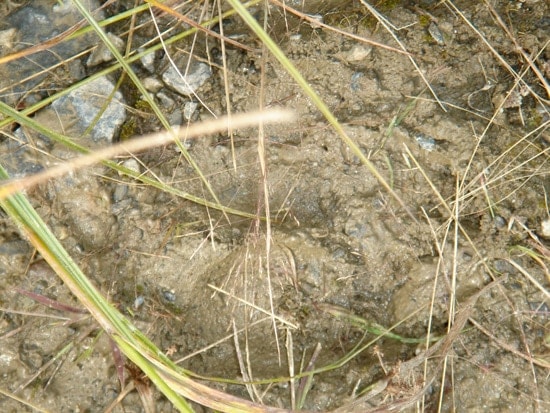 The last morning arrived and Eric was determined that Keith and I would see bears. Keith had not even seen a bear, so Eric left his camp management duties to personally locate a new spot. Eric found big fresh tracks near a beaver pond and the three of us built a ground blind. With a freshly deceased beaver for bait, Eric seemed confident that Keith would have action that final evening. Not only had Keith not seen a bear, but his automatic rifle was jammed as well. Ray Anderberg, a colorful and knowledgeable “bear man,” had loaned Keith his bolt-action H&H .375. Plenty of rifle for most anything short of an elephant. 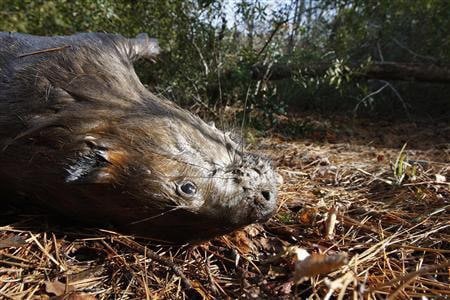 Four hours before dark on our last afternoon, I climbed up into the ten-foot high log ladder stand. With a brook bubbling gently in the background, birds chirping in the ancient trees, and no sight or sound of humanity, it was as serene a spot as a hunter could ask for. Serenity’s nice, but could we maybe throw a bear into the scenario? I thought about Keith in his ground blind by the beaver pond. Two last second bears? Is that too much to ask? Based on past experience, yeah, probably. 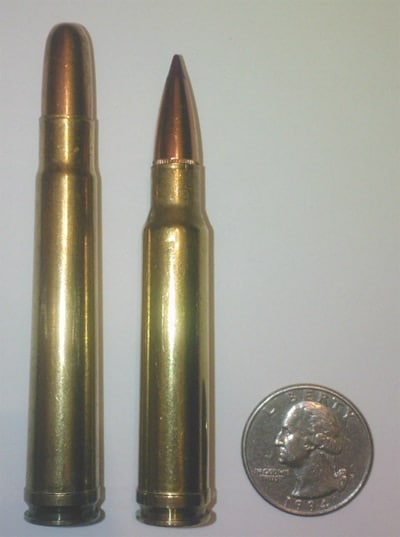 I leaned back against the tree trunk, closed my eyes and listened. I had been in the stand for less than five minutes when a noise near the creek shot my head to attention. Was something large moving through the brush, or had “wishful listening” simply transformed the sound of the gurgling stream? Moments later I heard a single quiet crunch in the leaves behind me. A few seconds, another. I strained my eyeballs to the limits of their sockets, but I didn’t dare move my body. I took a deep breath and relaxed. Minutes later, a black form appeared to the right moving slowly past me.

The bear stopped every few steps to sniff the air and swing his great head around from side to side. He was quartering away not fifty yards ahead, not even close to the bait that sat forty yards directly in front of me. When he stopped again to sniff, I raised the rifle to my shoulder, set the crosshairs behind his left shoulder and squeezed. As he tumbled backward, I rapidly bolted in a second round. But it wasn’t necessary. A final moan and the bear was done. 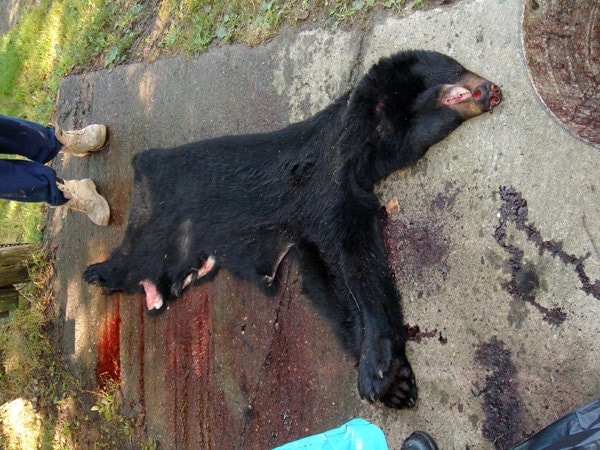 A few miles away, Keith had sat in his groundblind watching a boar begin ripping the beaver bait to bits. “At eye level,” Keith later said, “watching him tearing into that beaver, I got a little nervous!” Ray’s .375 was plenty ‘nuff to put the big boy down with one shot. Big enough that we named his Yogi and mine Boo-Boo.

Several years later, the bears are rugs and the hunts are memories – recollections of beautiful scenery, true wilderness, great people and two last-minute bears – there’s not a whole lot more you can ask for from a few days in the woods.