In our modern world, it is not easy being a squirrel hunter. Hunters pursuing monster whitetail bucks with incredible racks, bugling elk and gobbling wild turkeys cast scornful looks at those of us who chase bushytails. And wingshooters declare that their style of hunting carries more “class”.

Only a few decades ago, squirrels were the most sought after game animal in the United States. A heavily rural population drifted to the suburbs and as lifestyles changed, interests changed while the need to put wild meat on the table vanished with the introduction of supermarkets. 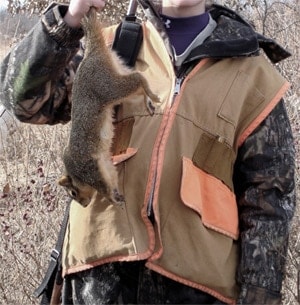 Nevertheless, squirrel hunting is steeped in tradition and history and still requires skillsets basic to all hunting adventures. My American history teacher, at a small rural school, proclaimed proudly that the British received a sound thrashing from a bunch of Revolutionary squirrel hunters. Squirrel hunting camps still thrive in some parts of the country and my family relishes a meal of fried squirrel adorned with buttermilk biscuits and milk gravy. And squirrel hunting hones outdoor skills necessary for any type of big game hunting. Class can be argued, but who wants to argue with folks who liken to their ancestors—ancestors who in fact whipped a world dominating foreign power with squirrel rifles? 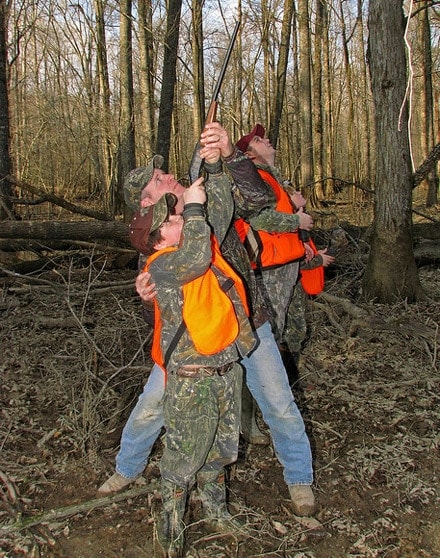 Harvesting squirrels is most often done with shotguns or .22 rifles. I have enjoyed both methods, however, I added a whole new dimension to my squirrel hunting forays many years ago with the purchase of a Browning BuckMark .22 pistol topped with a Bushnell red dot scope. Knocking a feeding gray squirrel from the top of a 100-foot tall hickory tree is every bit as classy as downing an elk at 400-yards with a 7mm magnum rifle. 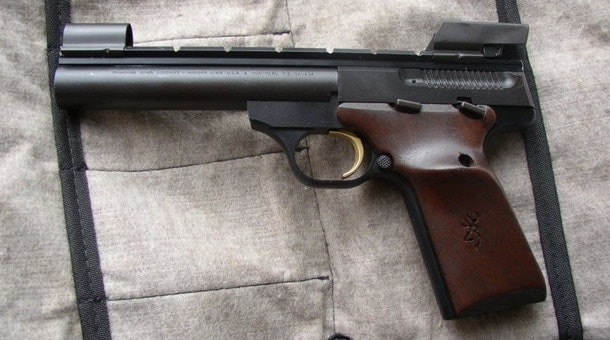 Squirrels are abundant in many parts of the United States and hunter access to state and federal lands and private properties, too, with heavy squirrel populations is usually readily available. Asking permission to hunt squirrels on private property may raise landowner eyebrows, but I have never been declined. Landowners seem to reason that anyone who takes the time to hunt bushytails has to be an OK person. An insider’s tip on maintaining a strong relationship with these private properties to hunt squirrels on is to not ask to hunt other game. Often,  landowners make the offer themselves, which I happily accept.

Choosing a handgun to use for squirrel hunting can be perplexing. The key to satisfaction is becoming familiar with several makes and models and choosing what suits you best.  Visit several gun shops and visit manufacturer websites: Browning, Ruger, Smith & Wesson and others. Options are plentiful. 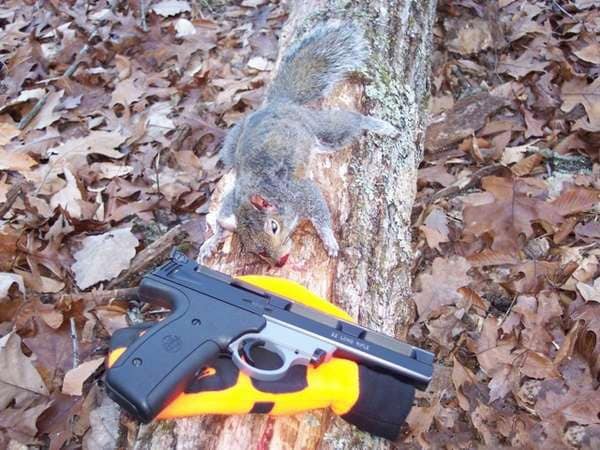 After choosing a suitable firearm, buy several types of ammo and spend some time on the range. Learning to shoot a pistol accurately and consistently takes time and good basic shooting techniques—especially when your target is the size of a softball. Instructors can be very helpful in getting the proper start to handgunning. My first experience with handguns occurred while I served as an Army Officer. Fortunately, for me, I entered the first class of officers required to qualify with the notorious .45. Our honest instructor suggested, when in combat, we fire our rounds quickly and then use the weapon as a club.

I prefer to be a bit more accurate with my shooting. Fortunately, for me, again, my wife, Dian, is a certified NRA pistol instructor. Although she claims I am not the best student she has taught, she does keep me on track with proper shooting techniques.

Basic squirrel hunting with a handgun does not require a lot of fancy equipment. However, if being classy is your thing, you can add a horde of hunting accessories to your equipment list. Scopes, shooting glasses, binoculars, range finders, squirrel calls, camo, shooting sticks, skinning knives and high bred squirrel dogs can put you styling with the best dressed waterfowl hunter.

I utilize a few basic squirrel hunting tools. I top my Browning BuckMark pistol with a Bushnell Red-GreenDot scope. They have proven durable and accurate through thousands of rounds. I have found that hollow point .22 rimfire bullets do the job cleanly on squirrels. The expanding bullets insure fewer wounded animals. 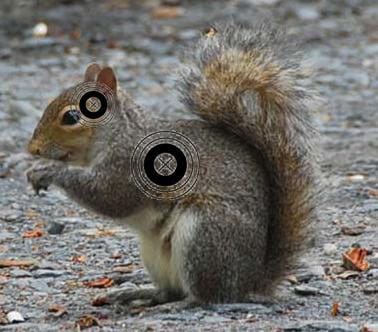 Arguments about the best spot to shoot a squirrel abound. Most claim a head shot is best, because the animal drops in its tracks. Others prefer a shot through the heart or lungs, because they eat the head and brains of their harvest, and place their shots just behind the shoulder. The late Gene Halbert, of Steelville, Missouri once told me that he prefers to “shoot ‘em in the middle”.

Sounds messy, but he employed a unique squirrel skinning technique, which kept him from handling intestines. He split the squirrel’s skin at the tail like the old time method. Next he stepped on the squirrel’s tail and pulled upward on its back legs, effectively stripping the squirrel of most of its hide.  Next, he grasped the hide left on the back legs and pulled it clear. Then he took a sharp knife (Halbert was an expert knife sharpener; I use game shears) and clipped off the head and upper body skin, tail and lower body skin and clipped the feet at the ankles. Next he removed the front and back legs at the joints. 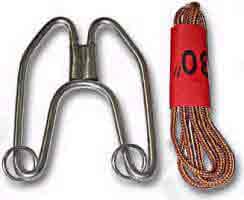 All that remained was the torso. Backstraps lay alongside the spine on either side. He cut through the spine at the top and bottom of the straps, clipped the ribcage on both sides and removed a clean piece of meat. The ribcage and intestines were then discarded. This is the slickest and cleanest way to clean a squirrel I have ever seen.

Hunting squirrels is a fun and relaxing way to enjoy time in the woods. Squirrels of the Midwest can be found on hardwood ridges, river bottoms and along the fencerows of old fields with a scattering of trees.

Squirrels are prolific eaters, consuming their body weight, 1.5-pounds, in food each week. They are opportunists and will eat anything from wildflowers to mushrooms but don’t think you can eat the same fungi as squirrels, however. They have a tolerance for toxins, which humans do not. 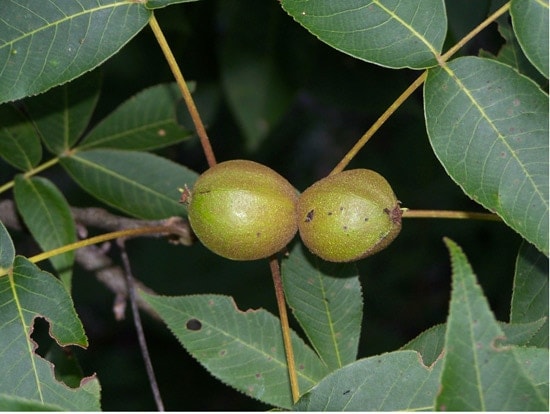 “Find the food source and you will find the squirrels” is an old adage, which stands eternally true. In early spring, squirrels can be found high in the tree tops nipping tender buds. After spring rains, they forage heavily on mushrooms which pop up overnight. By late spring, bushytails congregate in mulberry trees and other soft mast food sources.

Squirrel hunters who live near hardwood forests impatiently wait for the ripening of hickory nuts. Dozens of squirrels may work one tree as nuts come into the “milky” stage. Experienced hunters know that this is the prime time for fast action squirrel hunting. 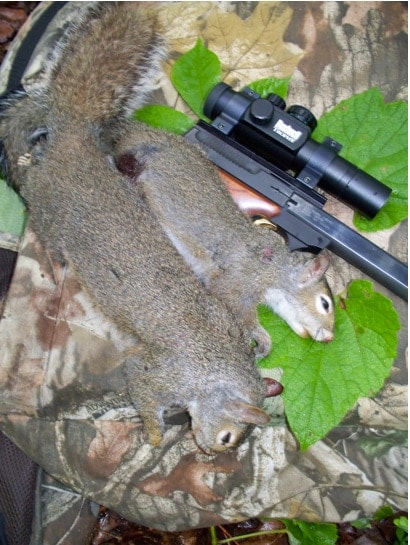 Taking up a stand or sitting on a stool near a tree loaded with hickory nuts and waiting patiently is a key to success. Squirrels will already be in such trees at daylight. The “crack” of a .22 pistol seldom disturbs feeding squirrels. You can knock one out of the branches and the others will resume feeding in a couple of minutes if you keep movement to a minimum. On many occasions, I have taken six squirrels from one tree. Squirrels will continue to feed on a “hot” tree throughout the day. So, sticking tight to a proven tree can pay big dividends. 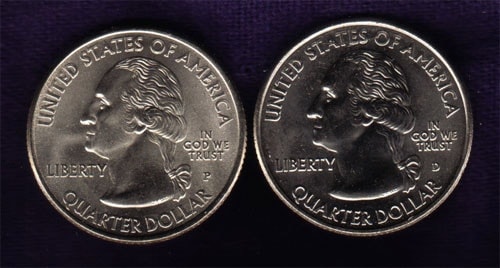 Squirrel calls are fun to use, but not necessary for success. Shaker-type calls mimic the excited chatter of a squirrel. My Dad used two quarters and by rubbing the serrated edges together produced the grating sounds of a squirrel cutting on nuts. The sounds my Dad produced had a calming effect on feeding squirrels.

To this day I use a pair of quarters to mimic a feeding squirrel, just like my Dad. And every time I hear the crack of my .22 pistol and watch a squirrel tumble from the top of a tree, I wonder what the British thought about the squirrel hunters which they faced.