There are many reasons why people might want to improve their shooting skills through a professional course. Perhaps they are total novices and want to get better at the sport quickly.  Perhaps they shoot for a living and as such never want to stop learning, or perhaps they are just tired of people ragging on their lack of complete and utter lack of skill and finally decided to do something constructive about it.

Or maybe, just maybe, all they want is to have a little bit of fun with their friends exploring a sport that breeds camaraderie and fellowship. 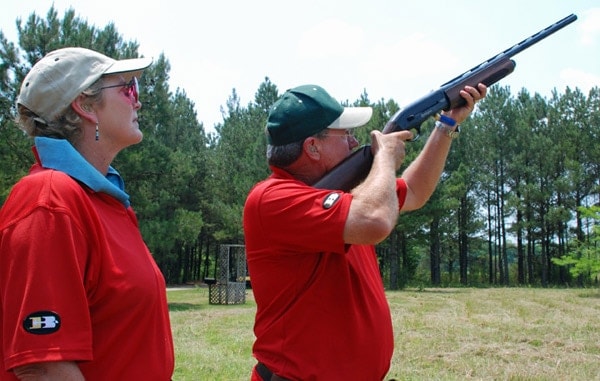 Yes, the reasons for “getting serious” about shotguns may be countless, but according to Vicki Ash, the feminine half of the Optimum Shotgun Performance (OSP) teaching school near Houston, Texas, whether someone is hoping to be the greatest hunter of beasts or destroyer of shooting clays know the learning journey never ends.

Husband and wife team Gil and Vicki Ash are busy people and, like all the best teachers, their subject is also their passion.  They are both NSCA Level III certified, and Student Accident Insured. According to Vicki, they are on the road 30 weekends out of the year, teaching all over the continental US, and they still find time to conduct individual and group classes on a weekly basis in Houston.

In addition to running OSP, they are the authors of several books, audio books, and instructional DVDs all devoted to what they call their ‘common sense’ approach. One of the interesting aspects of the Ash’s teaching methods is that they concentrate not only on improving their student’s gun skills, but they also try to teach what they feel are invaluable life skills associated with mastering a sport, such as self control and emotional and physical discipline.  They really try to make the extra effort to help people to realize that learning is a journey, and as such, should be not be viewed as frustrating, but part of a necessary process directed towards improvement. 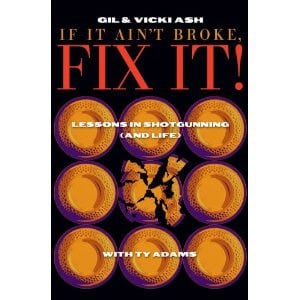 “People get frustrated,” explained Vicki Ash while discussing the most common problems faced by students. “Everyone wants it today. But then they understand that shooting a shotgun is hard, it is not an easy thing to do. And once they realize that, they are willing to back off and say ‘I am willing to take the journey’, because it is a journey, you will never get to the end of it. But the most satisfying thing is when people get it; just watching them grow and see that shooting can be a lot of fun. They don’t get mad at not hitting the clay; they learn how to fix it.”

What are the most common mistakes that new students make?

“Probably the biggest mistake one is learning how the eyes work…” said Vicki thoughtfully. “ And how to focus on the target, not on the gun barrel. Most people think that they have to look down the rib of a gun, and that is the last thing that you should do…you should look at the target…at the front edge of the target. Another thing I guess we spend a lot of time on is people practicing their gun mount. If you don’t have a good gun mount then the gun is not coming to the same place on your cheek and shoulder at the same time, and the gun will be off. That is a big thing, because if the gun isn’t going to right place, then it doesn’t matter what else you are doing.”

“What we teach them is that instead of getting mad, ask questions like ‘Did I focus on the front of the target?’ If yes, then ask, ‘Did I move at the same speed as the target? Did I move faster or slower or was I in sync?’ The third question would be gun mount. Through these three questions you can figure out how to correct the miss. That is what we do; teach you why you missed and how to correct it.” 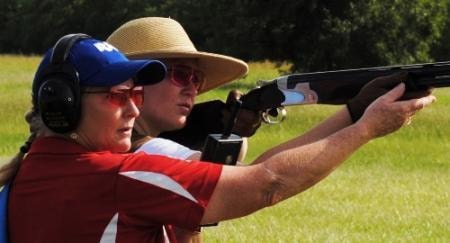 When asked if there were any guns she would recommend, Vicki smiled:

“People will call us all the time to ask us what kind of gun to buy. What we ask them is what they are going to use them for – field or clay targets – and then we try to steer them to get the right gun for what they are going to be doing. Field guns are great for the field because they are light and you can carry them a lot, target guns are usually heavier but you don’t carry them a lot.

We shoot Krieghoff guns K-80s and K-20s for the field, and I take my K-20 to the dove field. I am not going to take it for a pheasant hunt where you are going to walk a lot – I am going to take something a little bit lighter – but I do take my 12-gauge K-80 to shoot clay targets with.”

“The Krieghoff is a very well made gun. It is very reliable. It comes to a personal thing, when you choose a gun. Shop around. Some gun clubs have loaner guns, and they can try them. If not, then go to the gun store and see which one feels better in their hands….it’s a journey.”