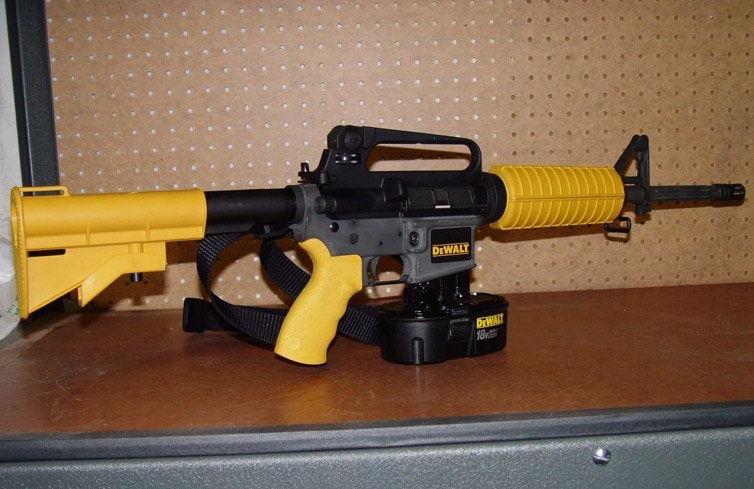 Word-compounding is a linguistic feat, definitely not unique to English, but practiced among speakers of the King’s all the same.

To make a compound word, speakers combine two or more words to form a new word that, in theory, is a more complete or accurate representation of the object they are attempting to reference in its context in language and culture.  “Football” is one; so is “browbeat.”

And so is “nailgun”—that sublime combination of two of the most macho toys on the planet.  But not really, because “nailgun” is not actually a word.  It’s “nail gun”—until now. 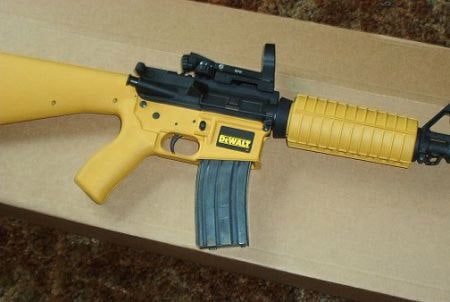 Meet the DeWalt M-16 Nail gun (or nailgun), the creation of a Mr. David Wiggins, which we first saw on Toolmonger (so you know what we’re looking at when we’re not looking at guns).

Fitted with a hundred-round magazine (we wonder if that would fall under the rubric of high-capacity magazine legislation), the DeWalt M16 nailgun is rapid-fire, cordless
tool and can sink a 6D nail all the way through a 2×4 past 200 yards.

The magazine is an original too and can presumably hold 5.56x45mm NATO rounds. Jeez, if a  sniper was slick enough he could feasibly secure the pickets to the stretchers of a fence from like a football field away. 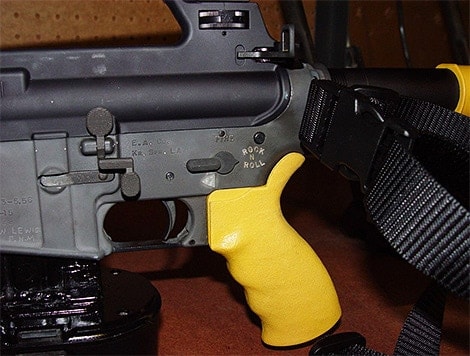 Evidently, Mr. Wiggins saw a picture of an inferior homespun job almost eight years ago and set about improving the theme and design.

Mr. Wiggins recounted, “I’d just picked up a new M-16 and was in the process of fixing it up a little. It needed new furniture anyway, so I sourced the safety yellow stock, guard, and grip.

Then, I went down to the DeWalt factory service place a few miles from the house to get a sticker. There, I saw they had brand new battery casings, so I picked up one of those too. I got home, found a short magazine , and got to work. 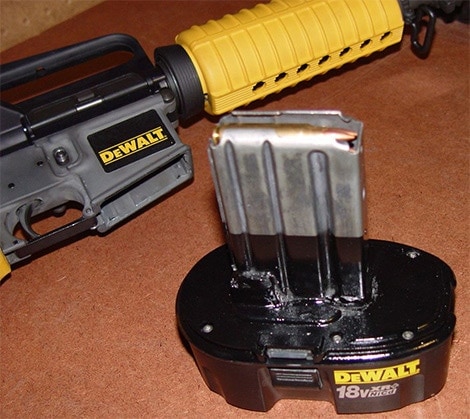 “I traced an approximation of the size hole I’d need in the top of the plastic casing, and slowly dremeled away the plastic I didn’t need. Once done, I epoxied the magazine body into the hole and quickly assembled everything so that I could make sure it all looked right before the epoxy set up. Once the epoxy cured, I took the mag back apart, cleaned up some of the bigger resin boogers, and then masked the top of the mag and hit it w/ some mil-spec glossy black coating (aka Krylon).”