If you’re not familiar with the 556R, here’s the short version: it’s SIG’s civilian rifle, the 556, re-jiggered in 7.62×39, and it uses lovely, dutiful, plentiful, and cheap AK magazines.  Announced at this year’s SHOT show, people immediately began to save up for it.  Right, because SIGs cost a hair more than AKs.

Because a SIG is a finer product.  We love AKs but SIGs have that SIG smell, that SIG finish, and SIG quality.  Quality?

Googling “556r issues” will net you some upsetting information.  Basically all of the problems that a rifle can have are landing at the SIG 556R’s feet, and the Internet is nothing if not a bullhorn for complaints, but there is enough noise about one issue that it deserves attention.  Most notably, it’s that many people are having serious problems shooting steel-cased ammunition.

Maybe it doesn’t behoove a SIG, but military surplus ammo is the way to go for practice, plinking, and playing around with guns.

Even if cheapo surplus ammo doesn’t match the grace of SIG’s reputation, that doesn’t mean its rifles should shun it.  But that’s exactly what people are finding out.

You don’t have to go far to find someone who will bash any gun by any manufacturer, but SIG, particularly U.S. SIGs made in Exeter, have been getting bashed with a kind of zealotry that may or may not be earned.  They’ve had recalls on top of recalls, and have run the gamut ranging from complete denial to full ownership of their firearms’ problems, but if these reports play out, then SIG will have more than a few people ready with their I told you sos.

Especially when they the R in 556R stands for Russian.  Because you can find any AK that has blemishes, wobbly controls and furniture, dings, scratches, and wear—even if they’ve never been shot.  At the low end it’s almost expected to see AKs with canted sights and loose screws.  The important thing here, is that they shoot anything. You can probably load an AK with those crappy little half-pencils you see in government buildings and impoverished public schools and do some serious damage.  (They don’t cycle reliably, but they’ll put an eye out, that’s for sure.)  That’s the AK’s greatest defining feature, if you can call it a feature.

If you make a rifle that calls itself Russian, and design it to use Russian magazines, make sure it shoots Russian ammo.  Right now, it seems the 556R doesn’t like to feed, strike, or eject the stuff.  (Seeing the loose, unfired, lightly-struck cartridges in the action makes us cringe.) 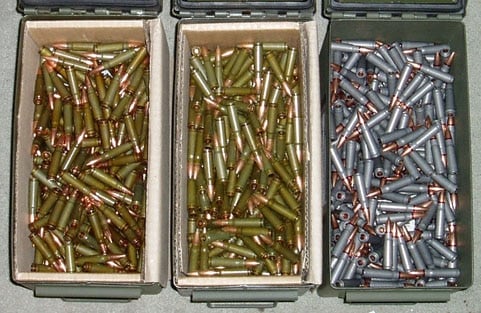 SIG isn’t unfamiliar with problematic product launches, but a 556 is no P250.  These aren’t budget handguns, these are priced to compete with ARs, SCARs, and other duty rifles including 5.56×45 556s—which don’t have problems eating steel—and are coming up short.

This is the sort of thing that, if dealt with slowly or quietly, will likely cause long-term damage to SIG’s reputation and business.  Let’s hope it doesn’t go that far, or better yet, that this is limited and overblown.  This gun has far too much promise.