Where Do You Hide a Buffalo Herd: Hunting Daggas with a Remington 700 in .375 H&H

I’ve never had an urge to shoot an elephant. Nor a lion for that matter. In fact, a Cape buffalo is the only member of Africa’s Big Five that I’ve craved. And now I had my chance. As I butt-crawled across the parched sand, a rifle balanced across my lap, salty sweat cascading into my sun-scorched eyes, I thought maybe this wasn’t such a good idea after all.

I stopped long enough to whack a tsetse fly gnawing on my forehead, then continued hand-walking, trying to keep up with the Professional Hunter (PH) and two trackers who were eying the Cape Buffalo herd grazing in the tall grass two hundred yards away.  We hoped to make our way to a mahogany tree twenty yards ahead where we could stand up and study the bulls. 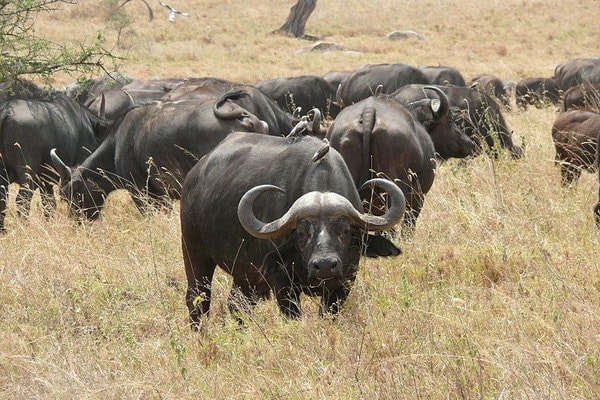 Suddenly the PH did a 180 and crawled past me in retreat. “We need to go back,” he whispered in that polite, unruffled PH sort of way.

I glanced up to see a bull elephant emerging from the forest, strolling directly toward us through the tall golden grass.

After four days, we’d finally caught up with the herd, which had been nervously on the move thanks to a pride of hungry lions. At least we’d finally laid eyes on them. Now what? 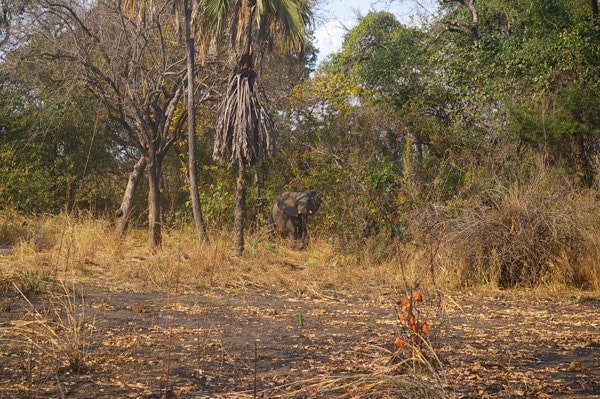 I was hunting with Kambako safaris in northern Mozambiqu, at the edge of the huge Niassa Reserve. While the largest portion of the 129,000-square kilometer reserve allows no hunting, Niassa wisely leases its peripheral territory south of the Lugenda River to a few hunting operators. Not only does this provide income to operate Niassa, but the hunters supply valuable information on game seen and taken. And the presence of legal hunting parties serves as an impediment against poachers who constantly encroach across the reserve’s borders in search of elephant ivory and rhino horn. 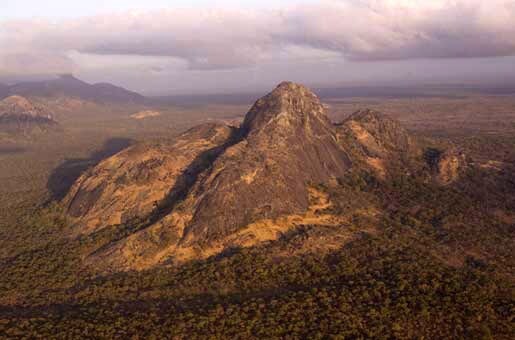 While getting my first-ever kudu was on my list of things to attempt, the first order of business was Cape buff. I’d promised Remington Arms that I would do my best to kill a buffalo with their custom 700 Big Game rifle in H&H .375.

But after wasting a couple of days waiting for Delta to forward the firearm to camp (the rifle was the only “baggage” the airline managed to lose), I loaded the rounds Remington had provided into the camp’s battle-worn Winchester bolt-action. With just a few days left to chase buff, they were playing very hard to find and we had no alternatives.

It was on the long Land Cruiser rides along the brutal dirt roads that I came to appreciate the sound of someone knocking on the roof of the cab. Thump, thump. Like Pavlov’s dog, I would salivate, knowing that one of the trackers had spotted something – an animal, a trail, fresh droppings – a sign of potential success and an excuse to get out of the damned truck. Thump, thump.

It was that signal that finally set us upon a herd of buffalo. Samson saw fresh dung on the road, so Johnny parked and we all set off behind fresh tracks with high hopes.

Six hours later, Samson spied the herd of some thirty animals milling in an opening, nearly hidden by grass. After knee- crawling, crab-walking, and butt-dragging nearly two hundred yards, we were sent back thanks to the sudden appearance of the aforementioned elephant. Had he seen us, he’d have caused quite a stir and the buffs would have headed for the hills. 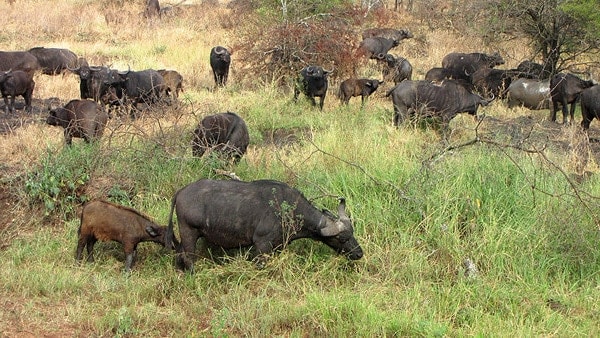 Based on the direction the herd seemed to be drifting, Johnny led us around the animals to a large baobob tree where we hunkered down and waited. Within minutes we were nearly surrounded by cows and young bulls. Only one mature bull showed and Samson set his homemade shooting sticks up for me. I placed the rifle atop the tripod and prepared for the shot. “Hurry before he gets into that brush,” Johnny whispered urgently. Perhaps if he’d not used the word “hurry” I might have done a bit better. I squeezed the trigger, or maybe I jerked it, and several tons of lean beef roared off in a cloud of dust.

I couldn’t blame the Winchester. I’d sighted it in that morning and was dead on at 75 yards, the approximate distance of the old dagga boy. The sticks were a tad wobbly, and there was that “hurry” excuse, but I finally admitted to a case of three-quarter-ton-buck fever. A grueling all-day stalk with heat and bugs and thickets and cross-country crawls had come to an end with the American making a bonehead miss. The long dark drive back to camp was quiet except for my occasional expletive, and Johnny’s reassurance that we’d get another chance. A nightjar zigzagged in the headlights dining on bugs. Please eat them all I thought. And a sighting of a leopard crossing the road and a pack of wild dogs took my mind off my miss-fortune.

Next to last day, crack of dawn and I finally have my Remington in my hands. I had to pay a bush pilot to deliver it from Pemba to the camp’s airstrip. But it was money well spent. Also in the gun case were my shooting sticks. Solid sticks that I’d practiced with a month ago in the states. Now I had my stuff. All I needed was another buffalo, some fresh confidence, and a bit more luck. 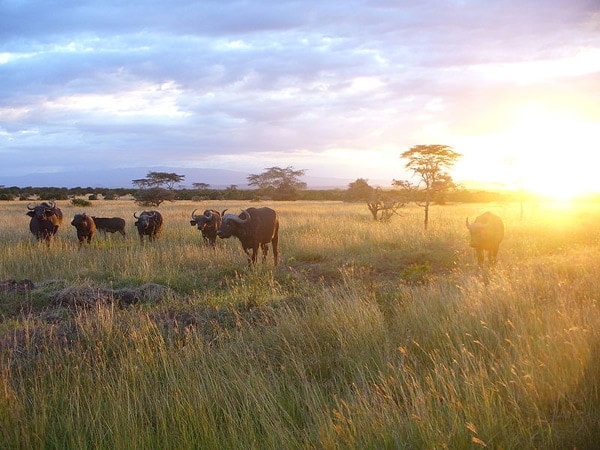 Our plan that morning was to stop the Cruiser at first light for a quick sight-in of the rifle, then continue on in search of capes. I was half-dozing when I heard opportunity knock.

The brakes squeaked and the truck eased to a stop. “Inyati, inyati” I heard Shimoish whisper loudly. Suddenly Samson was by my car door in the early dawn light, urging me to hurry. Johnny had already popped out from the other door and I followed Samson’s point toward the large meadow to my left. There, two buffalo bulls stood 150 yards or so away, munching on grass and eyeing us suspiciously. There was no time to think, which was probably a good thing. 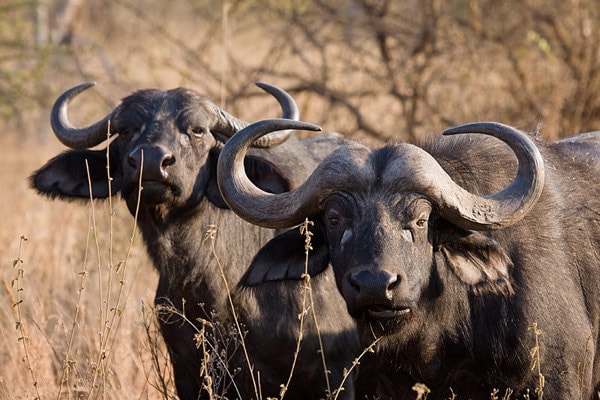 Samson had already set my sticks next to the Cruiser and I cranked a soft into the tube and balanced the rifle atop the tripod.

“Take the one to the left,” whispered a wide-eyed Johnny. I concentrated on the crease behind his left shoulder and squeezed ever so gently the trigger. The bulls thundered away across the opening down a hill and out of sight.

“Did you hit him good?” Johnny asked.

“I think so, maybe a bit far back,” I responded.

He didn’t give me a happy look.

The four of us walked quickly to the supposed point of impact. There, Shimoish found a spot of blood no bigger than a thumbnail.

“Well, you’ve hit him,” Johnny said matter-of-factly, staring at the ground for more sign. The sun was still to peek above the eastern horizon as we followed Samson slowly looking for more blood. “Here,” Samson pointed and he began to walk faster. Within fifty yards, the spots of blood were turning into great splashes of crimson. 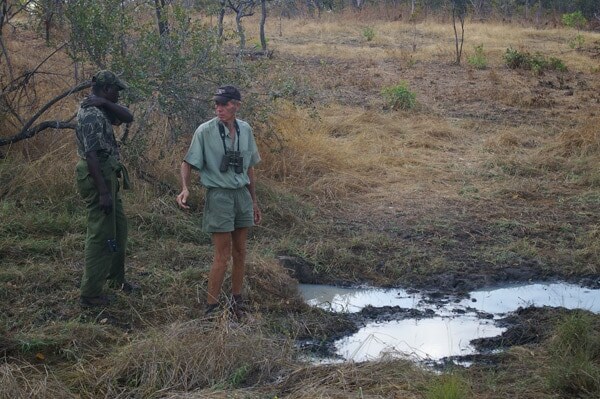 As we approached the downhill slope where we’d last seen the animals, Samson stopped and spoke in Portuguese to Johnny. There in the middle of the lower field stood the bull. He was standing broadside a football field away, his head down, his partner nearby, looking over his shoulder as if to say, “hey, why are you stopping? We gotta get outta here!

“Hit him again,” Johnny whispered. Samson spread the sticks and, with a solid now in the chamber, I prepared to place a second shot into his ribs. But a small tree blocked the front chest and shoulder, so I swung in front of the shoulder and placed 300-grains into his neck. He was done. 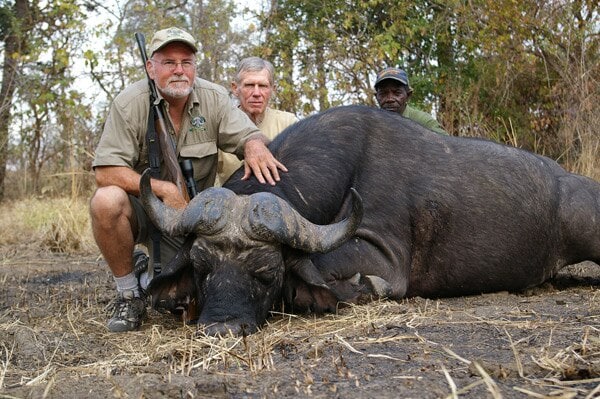 His buddy took the hint and vamoosed. The old boy lay still though, his back to us. “Put another one in him,” Johnny said, “It’s the dead ones that kill you.” That was reason enough and I placed a second solid into his spine. The bull didn’t flinch.

Nevertheless we approached cautiously and Johnny gave him a poke with the shooting sticks before we began the many post-mortem tasks. While his horns were not particularly long, his bosses were solid and like his face and shoulders, battle-scarred and worn.

“We’ve seen these two for three years and never could get a shot,” a smiling Johnny told me. Then with a sigh, he placed a hand on my shoulder. “I really like it when they go down like that,” he said. “I hate having to go after an old dagga boy when he’s wounded. Nasty business. Nasty.”

The Remington 700 Custom African Big Game rifle in .375 H&H is a solid, well-balanced shooting machine. When I finally got my hands on it, the results were nothing short of sensational. Of course, the rifle was part of a “team” that included a Meopta Artemis 2000 1.5x6x42 scope that held its zero from start to finish. The Remington Premier 300-grain Swift A-Frame cartridges did their job as did the Federal Premium Cape-Shok Trophy Bonded Sledgehammer solid. I recommend that combo for anything from springbok to buffalo. 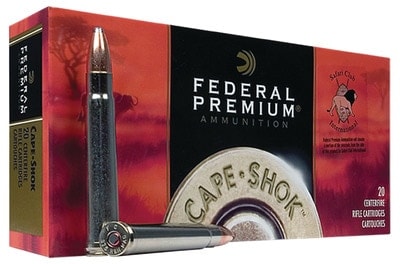 The Sporting Wood Creations break-down shooting sticks were indispensable. I learned the hard way that all shooting sticks are not created equal.  Also recommended is the ESP-Digital hearing protection system. I could hear the barking of a bushbuck a quarter mile away, but my ears were spared from the muzzle blasts. Finally, a Thermacell insect repellant out-performed sprays and creams by a long shot. Don’t leave home without it.