The Case for Caselessness: the Volcanic Rifle

The Smith & Wesson Volcanic gun is one of those historic firearms like the Colt Walker pistol that although unsuccessful, represented an important breakthrough in technology that led to an entirely new world of repeating firearms.

The Volcanic was the grandfather of the famed Winchester rifle.

“There are two important developments with the Volcanic rifle,” explained Jim Supica, director of the National Firearms Museum in Fairfax, Va. “The first is that the Volcanic was a significant step toward a weapon with a self-contained cartridge instead of the old way using separate powder and ball. Secondly, it was an attempt to make a lever-action weapon. The Smith & Wesson partnership in production of the Volcanic was a failure, but it was an early attempt.”

The Volcanic Repeating Arms Co. began producing rifles and pistols in 1856 after a partnership was formed by gun designers Horace Smith and Daniel Wesson. The weapons used what was termed a “rocket ball,” a bullet with a hollow cavity in the bottom in which powder was poured. This effort to include powder inside the shell was a huge leap forward in firearms technology.

“It used a lead bullet with the base hollowed out,” Supica said. “Powder was packed into the bottom and you bought the bullets pre-loaded. The problem was, the amount of powder loaded was not great and so the Volcanic fired a low-power round.” 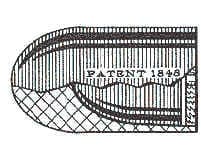 A priming cap held the powder in place and provided ignition, but at .31 or .41 caliber, the weapon had a muzzle velocity that lacked punch. The body of the gun was made of “gunmetal,” a form of bronze that gave it a distinctive golden tinge, and it looked somewhat like the Winchester rifle that would follow it. The weapon’s main advantage compared to earlier cap and ball rifles was its rapid rate of fire. However, it suffered from design defects including gas discharge around the breech and misfires.

Misfired rounds had to be un-jammed by use of a cleaning rod as the gun had no means of extraction.

“There weren’t a lot of these weapons made,” Supica noted. “We’ve got three or four here in the museum on display, a couple of the pistols and a rifle.”

Supica added that a recent science fiction space western movie entitled Serenity featured a futuristic gun copied from the look of a Volcanic. 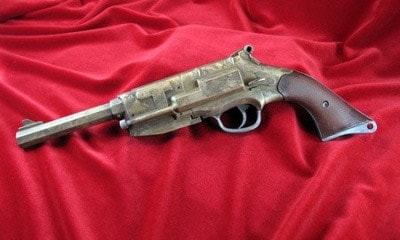 Volcanic Repeating Arms Co. lasted from 1855 to 1857 and produced only a few thousand lever action pistols and rifles. Unpopular because of its unreliability, improvements in design led to the much larger and more powerful .44 caliber Henry repeating rifle a few years later, just in time for the Civil War. The Henry was not provided during the war as standard issue for Union troops, so they ordered it out of their own pocket money because it gave them an important edge with its rapid rate of fire over Confederate troops who were still using single shot cap and ball guns.

“The impact of the Civil War was a huge period in firearms development,” Supica said. “It saw the evolution from the percussion cap to the self-contained cartridge. The Henry rifle was the next step. That in turn led to the production of the famous 1866 Winchester.”