Yesterday we found out that Arizona was considering making the Peacemaker its state firearm, on account of how well the Colt Single Action Army fits into its “story”.  Then we realized Taylor & Co., classic arm’s reproductionists extraordinaire, have come out with a replica model that promises to keep the peace among shooters of the cowboy persuasion.  And then we connected the dots, and now you’re reading this.

While we understand that describing a firearm as “modern” can and does often accept that the design is now a century old, the Single Action Army is decidedly not modern.  Besides being single-action only, you do have to load it one cylinder at a time, and it’s chambered in the pre-smokeless-powder .45 Colt. 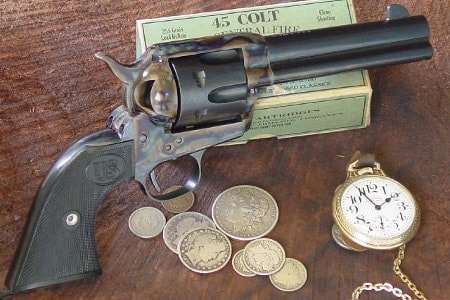 That doesn’t make it any less accurate or popular; Colt still makes them and they have been made, over the years, in many different configurations, lengths, and calibers, including modern chamberings like .38 SPL and .357 Magnum.  In their original form, they served as the main sidearm of the U.S. Army from 1873 to 1893.  Of course the gun to replace it was the Colt Double Action Army, which in turn was replaced by the 1911 which lasted for seven decades until they went Beretta.  You knew that, though.

The Colt Single Action Army is still in service for one group of people: cowboy action shooters. 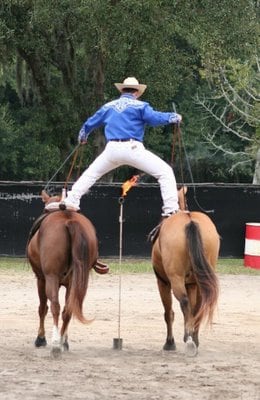 Truth be told, they’re probably faster with a pair of Peacemakers than most people are with a 1911, and with good reason.  They’re simply the best in their class.  If cowboy action shooting has flown under your radar, it’s half rodeo stunt-riding and half trick shots that in movies are all CGI, only these people do it for reals.  (The implied third half is costume-party themed barbecue.)  And we guarantee you that if you call a Single Action Army a worthless, old piece of shit something horrible yet crowd-pleasingly entertaining will happen to your face, ass, or groin area.  Or all three. 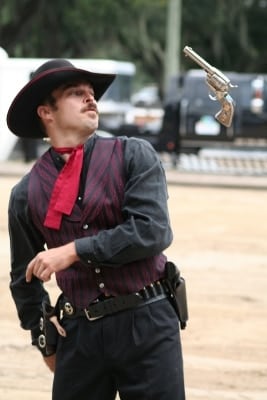 Not to say that all Single Action Armys are created equal.  Taylor’s & Co., Inc. makes what they believe, and we’re inclined to believe them, a far superior Peacemaker.

Designed with the help of mounted shooter Denny Chapman, the Runnin’ Iron revolver is a Peacemaker tuned up. 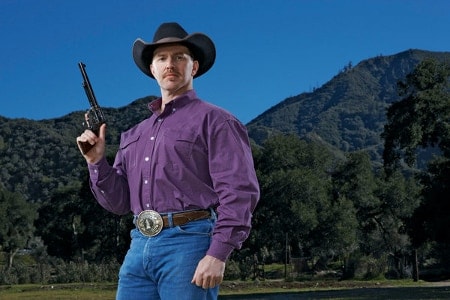 “Taylor’s & Co. is proud to introduce the Runnin’ Iron, a light, efficient, balanced single action pistol designed specifically for the sport of Mounted Shooting. Inspired by mounted shooter and Wild West entertainer Denny Chapman and designed by third-generation Wild West Showman and gunsmith Deke Rivers, the Runnin’ Iron has been created by cowboys with years of black powder blank shooting experience in the harshest environments. 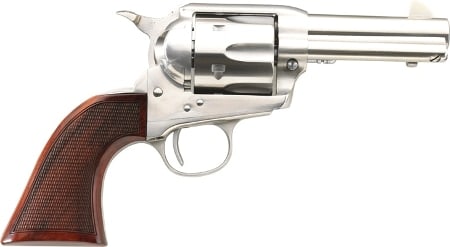 “Offered in stainless steel or blue finish, the Runnin’ Iron features a low and wide hammer spur; checkered, one-piece, gunfighter-style grips in walnut or black polymer; a wide trigger; second-generation transverse cylinder pin latch; crescent-style ejector rod; reduced-power spring kit; and extra clearance at the front and rear of the cylinder. These features make the Runnin’ Iron the lightest and most efficient mounted shooting gun on the market. The Runnin’ Iron comes ready to shoot, out of the box, with no additional modifications needed.” 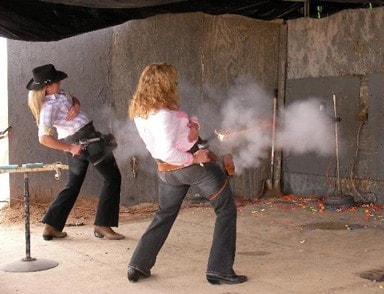 The best part has got to be the price as you can find the plain blued Runnin’ Iron online for less than $500.

Sort of makes you want to try fanning one, don’t it?

You know you want to.