Double rifles for North American Hunting? Whatever Trips your Trigger

Someone recently asked me, “Where does the double rifle belong in North American hunting?”

Double rifles once filled a need for firepower when facing large, dangerous game in Africa and India, and for decades they had that niche to themselves. Back when all guns loaded from the muzzle, the double barreled 4 bore rifle threw a quarter pound ball for some serious elephant smackdown, and if your first shot was a wee bit off, the double gave you one last chance to live while your gunbearer practiced the better part of valor, taking your reloads with him.

But smokeless powder and high velocity cartridges paired with the bolt action rifle muscled into the double’s territory. The bolt action is superior to the double in the firepower arena because it generally holds, depending on the cartridge, two to four shots more than the double. Even so, the double barreled rifle refuses to die an anachronistic death. 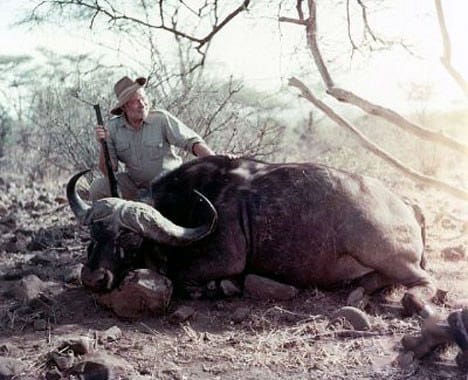 Professional hunters in Africa still choose double rifles because they do offer a very rapid second shot at scary animals, more rapid than working the handle on a bolt gun. They are choose speed and total dependence on that one last shot to save themselves from a death too nasty to post on YouTube. Their clients may choose a double for the same reason, or maybe just for the nostalgia, or because they love doubles or maybe for all those reasons.

But let’s be realistic. Except arguably for brown bears and bison, there is no practical application for a double rifle in North American hunting – at least, not until they clone enough wooly mammoths.  We just don’t have the badass animals of stomping, goring, fangy death that the double and its monster bullets were so ably designed for dispatching. Even brown bears readily fall to lesser cartridges like the .30-06, and if you want a rapid second shot, hell, just use a semi-auto Browning BAR and have a whole handful of “second shots” in queue.

A double rifle in North American hunting is really just a curiosity. But you know what? It’s a mostly free country and if you want to hunt bears, hogs or prairie dogs with a Purdey double in 400 Nitro Express, have at it. I sometimes hunt with a traditional muzzleloader even when I could use a centerfire rifle, just because I want to. But if you’re gonna be different, get used to getting “different” looks, like the guy I saw deer hunting with an AK-47 clone. OK, his 7.62×39 cartridge performs roughly on par with the 150gr bullet loads in the .30-30 lever gun I was carrying, but hunting with an AK just doesn’t look right.

If I saw you out in the elk woods with a double rifle, I’m sure my first thought would be, “Is that guy hunting elk with a shotgun?” But once I talked with you, I’d probably say, “Go you, for making yourself happy.”

Another practical matter is the double’s weight, which can be significantly more than that of a bolt gun because it’s got (duh) double the barrels. If your brother-in-law is your gunbearer, who cares? But if you’re carrying it yourself on a walking three-day hunt in the mountains, I wonder if you’ll choose it two seasons in a row. 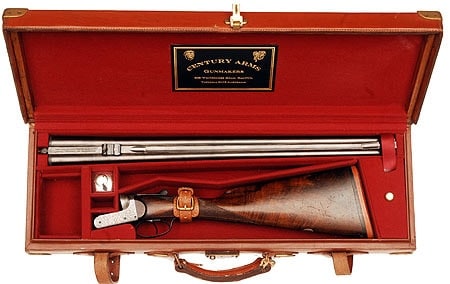 Now, still being practical, let’s talk about price. Unless you are wealthy, or unless you have no other interests like, oh, let’s say feeding your children or buying gasoline, double rifles are not within your budget. For the cost of one fine, new custom two-tuber, I could have an entire battery of centerfire, rimfire and muzzleloading rifles and handguns to hunt everything on this continent, with enough left over to buy a new Harley and take my girlfriend dancing. In Paris. 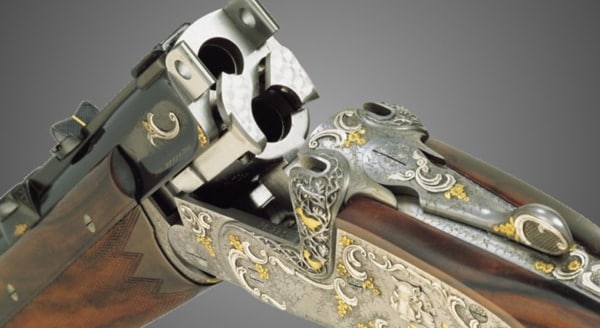 Like a trophy blonde who never finished middle school, the double rifle is really only good for doing one thing. The double barreled rifle is, to be kind, not very useful unless the barrels are regulated to fire a single, specific load. That is, the barrels must be physically aligned so that at one specific distance – 100 meters, for example – bullets from both barrels converge to a single point on the target. This is a lengthy, pain-in-the-patootie process requiring trial-and-error fitting of the barrels while simultaneously tweaking the cartridge load. This is not something you’re gonna make in your garage. 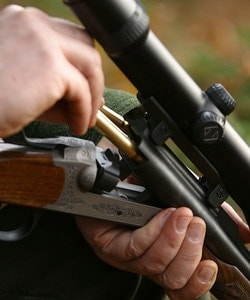 Once the rifle is regulated, you’re stuck with that single loading. Certainly there are some exceptions but, generally, if your monster gun is set up to shoot solids at buffalo, when you stuff soft point bullets in there to shoot at lion, the bullets aren’t gonna go to the same place as before. And when a wounded lion is running at you full tilt, you don’t have time to think, “OK now, the first shot is gonna be a little low and to the left so I wanna aim high and right, and if that doesn’t work, the second shot went high and right on the target so I wanna aim low and left, but I have to wait until he gets to 25 yards.”

If you find a double rifle at a steal of a price – say, equal to that of a new car – make sure the load for which it’s regulated for is stamped on the barrels and frame. If that information isn’t there, you’re screwed; if you’re still gonna hunt with it, do yourself a favor and fit it with a bayonet. 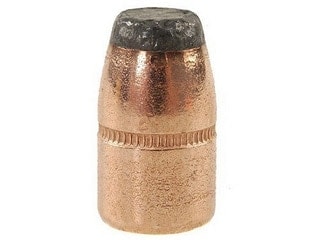 Even if it shot spot-on, I still doubt I’d hunt with it here. There are better choices. And really, that’s the bottom line.