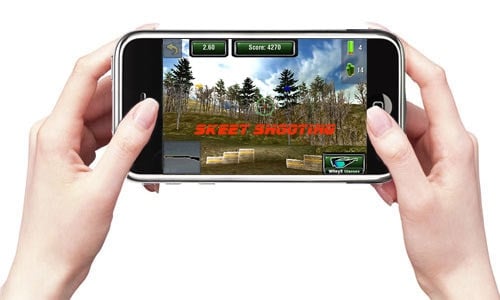 Guns.com’s detachment from the world of video games has been well documented in past articles, and, though we’ve said it thrice before it bears repeating: we don’t really get them.

The lion’s share of the blame rests on the fact that we just don’t see spending that much time on anything in this world really without the promise of a cookie at the end of it—possibly a side effect of maturity and good upbringing.

The rest of the blame falls squarely on our shoulders because when we say we don’t get video games, we’re totally lying. What we really don’t get, are video games post ‘95.  Everything before that is kosher.

Throughout the 70s, 80s and 90s, Guns.com blew through enough quarters to change the outcome of seven Superbowls.  Side scrollers, first person shooters, that game where you tried to guide marbles through a maze—simple games with simple premises for simple people. We couldn’t get enough of them.  Prairie Dog Hunter (anybody else remember prairie dog hunter cause this link ain’t it), Doom, Wolfenstein, Pitfall!, Pac-Man, Donkey Kong and of course the Mario Bros.—they call them retrogames nowadays but we called them a Saturday night way back when.

And with some 300,000 apps out there for our getting-less-new-by-the-minute iPhones, it was only a matter of time before Guns.com decided to burn some more quarters and check out what’s happening in the realm of smart phone gaming (because we heard it’s pretty darn close to our old 16-bit amigos).  And we think we found a worthy candidate for you shooters to spend some fun money on.

Reload is the name of the game and it is a pretty decent shooting simulator.  Pulling from a whole arsenal of firearms, you move from pistols, to rifles, to the skeet range to military and sniper toys.  The game is comprised of 17 staged levels with well over 100 game awards and milestones to shoot for (get it?) so you’re not left scratching your head once you’ve seen the end screen—there’s still high scores to get.  Some of the training scenarios are Olympic shooting events, hostage rescue, cowboy style shootouts and sniper sequences.  The game also gets faster… We particularly liked the pistol scenarios where you essentially have to Mozambique a human target (put two bullets center mass and one in the guy’s computer).  It’s pretty damn tricky getting the sequence right.

What else do we like?  This game, like A, B, Down, Up and Side to Side, basically has two “buttons”: sight the malcontents in with your dominant hand’s thumb and tap the trigger to fire with your other one.  We also like that the guns are authentic, licensed firearms like Remington and Desert Eagle.

What we don’t like?  The controls get a little jinky, especially when taking your cursor from one extreme of the screen to the other.  The game scrolls lightly with your crosshairs and we find our thumbs don’t reach that far without taking our finger off the screen and pushing it further, swallowing up valuable seconds. 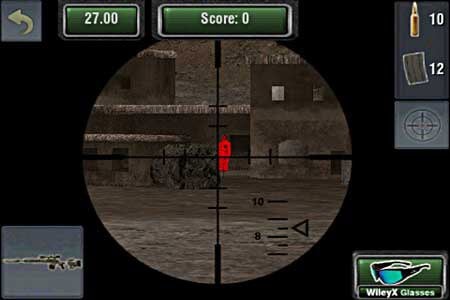 You can get Reload now for iPhone, iPads and iPod Touches and by the end of the year it will be on the Android market, you cheapskate whiners.  But what do we really dig the most?  It cost three dollars on iTunes.  We’ve had coffee that cost more than three dollars and with the quality of the final product taken hand in hand with all the time we’re sure the designers spent on this game, it’s a steal.

No, it will not make you a better shooter, but it can sure help you kill some time in the bathroom.