It wasn’t that long ago that Walmart stood poised to do the two-step with the best of them when it came to supplying the American public with guns, ammo and sporting goods.  Employing the “more, bigger, cheaper and all under one roof” strategy that turned the Arkansas based country store into the retail Juggernaut it is today, Walmart sold basic working man’s firearms at discount prices.  Though you’d never go there for your perfect rifle, you could get a the factory version 24 hours a day, seven days a week. 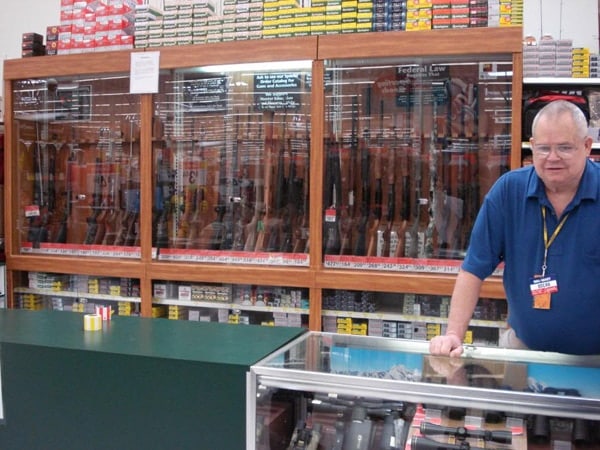 By the turn of the 2006, a bunch of stores still sold ammunition (about a third still sell ammo to this day in fact), but, citing diminishing sales and after pressure from special interest groups and a rash of school shootings threw a spotlight on the company, Walmart decided to stop selling guns in two thirds of its 3,600 stores.

Well, Guns.com is please to inform you that like a thief in the night, Walmart has discreetly begun restocking the shelves of hundreds of their stores across the country with rifles, shotguns and ammunition.

A spokesman for the Walmart, David Tovar, released this statement: “We made a business decision to sell them in certain stores because we have realised the appeal was perhaps broader than we thought.  But we are committed to doing it as responsibly as possible, as always, in compliance with all applicable local, state and federal laws.”

Walmart has long maintained it scaled back its gun enterprise because of lack of interest.  As reported by the Wall Street Journal, Walmart’s first gun blitz was attached to a much larger movement within the company to make the stores more upscale in order to compete with a growing number of higher-end retail chains and maturing consumer tastes.   Alongside guns, the store also began selling fishing rods and bolts of sewing fabric, both of which failed to catch fire.  Currently they are trying to breath new life into these branches of the business, calling them “heritage categories”.

Gun.com suspects Walmart has probably been itching to get guns back in the rotation since they stopped selling them but we’re sure even moreso in the past three years.  With any and everything gun outpacing even the most optimistic analysts projections and Americans squabbling more than ever over saving a buck, the economic climate is the definition of the perfect storm for a store already counts a legion of gun-owners as its customers.

If you want to figure out if a store near you is getting good with guns again, check out the company website here.