An Animal With Dirt on Its Face: Hog Hunting at Buck and Boar

They go by several names – wild pigs, feral hogs, wild boars, razorbacks, damned destructive bastards – regardless of their monikers, Sus scrofa is populating America inch by inch, oink by oink. Nearly every state and some Canadian provinces can now claim to have resident feral hogs rooting around within their borders. Because they destroy crops, tear up delicate flora, compete with the local fauna, and procreate like bunnies, farmers and wildlife biologists are less than thrilled with their presence. 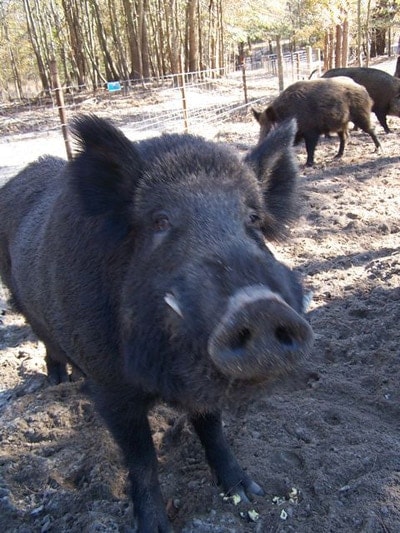 A face only a sow could love

But for hunters, it’s an opportunity to challenge a savvy and savory quarry that, at times, can be a bit testy about folks shooting in his directions.

In February, I had the opportunity to join Troy Ayer, owner of South Carolina’s Buck and Boar Lodge, to try the Jarrett “Original Beanfield” .280 on one of Troy’s pure-strain European hogs. These are the thick-shouldered, long-snouted, shaggy grey beasts, which still run wild in the hills of east and central Europe. The average American feral hog is usually solid black with a more round body shape, but still just as tough and tenacious. And both can tip the scales well over four hundred pounds, with 100-150 probably being the average.

On this particular cool, rainy afternoon we were slipping through open hillsides of long leaf pines. Once the warm weather returned in another month, the hogs would be back down in the swamps, rolling in mud to stay cool.

“They’re most likely laid up in the pine straw on the high ground,” Troy said. “Up under the trees. They won’t be moving this time of day. We’ll just have to keep glassing.” 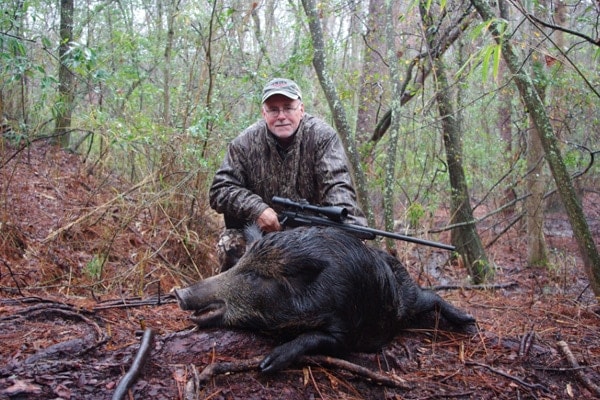 Author with an average sized boar taken with his Jarrett .280 Beanfield

“They’re asleep,” he whispered excitedly. “The one on the left is huge! Can you see him?” The .280 cracked and one hog sprinted from his bed. The other kicked his back legs briefly, then lay still.

“European hogs don’t get as big as a lot of feral pigs,” explained Troy. “The feral pigs come from domestic stock that was originally bred for meat production. The European hogs are a wild strain and usually top out around 250 pounds.” Troy said that they do get bigger, as evidenced by the 550-pounder taken at Buck and Boar in 2009. 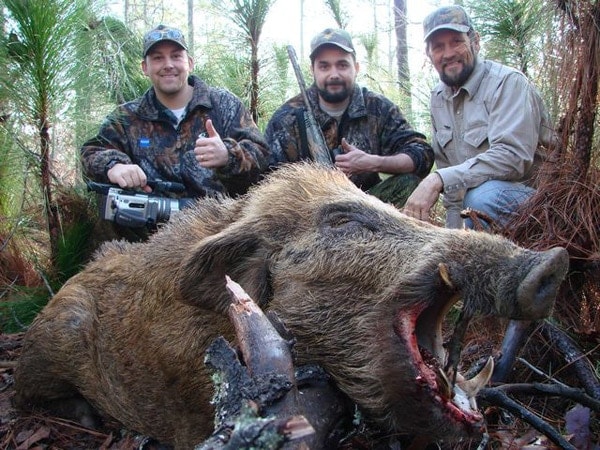 Hunting methods are as varied as those for deer. Troy likes stand hunting for sheer success, but enjoys the challenge of the spot and stalk.

We have stands that overlook food plots and corn feeders,” he said. “Some accommodate up to four people – others are simple one-man bow stands or ground blinds. But my favorite way to hunt is spot and stalk.”

Troy said a lot of people who’ve never done spot and stalk for hogs don’t realize what they’re looking for. Being primarily nocturnal, most porkers spend a good portion of the day bedded down. Like deer, they’ll get up occasionally, nibble, and then lie back in a thicket or a burrow into leaves or pine straw. 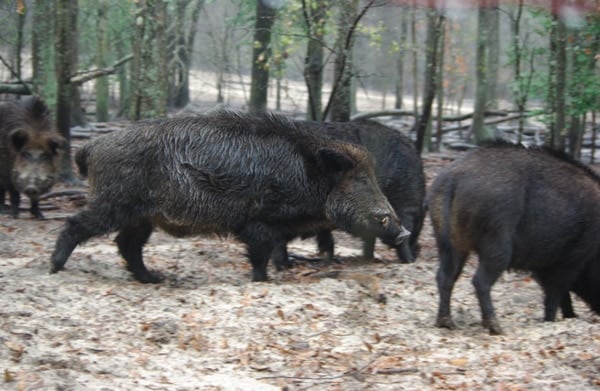 A big European boar on the move is an impressive sight

“We just do a lot of glassing and move real slow and try to methodically pick the woods apart,” said Troy. “And because you’re hunting a bedded animal, you’re trying to find an ear, or a dark spot that has hair on it. You’re not going to find a whole hog generally. You’re looking for pieces and parts.

“If you locate him without waking him up, and you can keep the wind in your face, you can usually plan a way to kill that hog.”

He went on to say that wind direction is critical. If you’re not walking into the wind, Troy stated emphatically, you’re wasting your time.

I asked him true trophy hog hunting – Killing that old gristly big tusker? Troy believes there’s a lot of similarity between that and the pursuit of a mature whitetail buck. “You can talk about hunting the meat hogs,” said Troy, “and then you can talk about a mature boar hog, and its two completely different things. Just like deer. 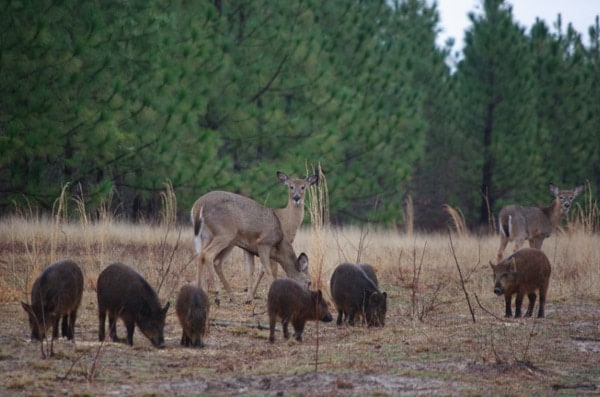 “With some luck, you can usually go out and pop you a doe or a little four-point. But if you’re going to hunt a big mature buck that’s withstood years of hunting pressure, you’ve got to hunt a whole different way. And it’s the same with a boar hog. A big old boar is going to travel by himself. You won’t see him in a herd of females and young ones, or what we call a sounder. The big boars are usually going to move later in the evening. He’s the last one into the field or to the bait site, and the first one to run if something goes wrong.”

Because of the “shield,” a thick hide and cartilage covering around the boar’s chest, bullet selection is important. Because the shield has been known to stop arrows, musket balls and small caliber bullets, Troy is picky about firepower for hogs.

“I like the 180- to 200-grain bullets, and core-bonded are great. .35 Whelen is an awesome hog round. Also the 45-70. That’s one of my favorites. Shotgun slugs are also good for shooting through the heavy cover they like to lie up in.”

He went on to say that even with the big loads, you rarely have an exit wound, and that means little or no blood trail. The fat and hair can plug up the hole and soak up the blood, and with 80 percent of the hogs shot in the evening, tracking becomes a challenging and potentially dangerous nighttime chore. 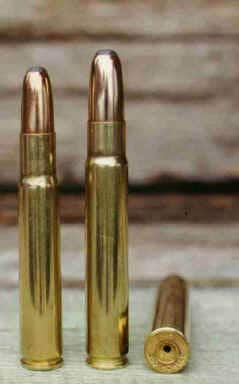 “Get a good quartering away shot,” advised Troy,” or, if you’re very proficient, pop him behind the ear. Then you don’t have to go looking.”

If you bag a wild hog, you’ve got some great eats. A 100-pound or less sow is ideal and provides delicious pork loins, chops and hams that are a bit leaner than that of their domestic cousins. If it’s a big boar, turn him into sausage.

On a similar note…

Kenny Jarrett, renowned custom riflemaker, has his own ideas about hog loads. His Cowden Plantation on the Savannah River near Aiken, South Carolina is loaded with feral hogs and he’s always delighted to use them as “guinea” pigs. 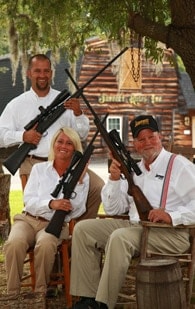 “The standard .280,” said Kenny,” is, in my opinion, the best mid-range cartridge available for North America. I prefer it because of its sectional density and ballistic coefficient. Loaded properly, and with the proper projectile, it will give excellent performance on most anything in North America, except big bear.”

“The right bullet is a critical part,” he continued. “For big hogs you need a super-tough bullet that penetrates. I’ve seen shields three inches thick so you’ve got to have something with some real penetration. Say, a 160-grain Nosler Partition, a Swift A-Frame, or a Bear Claw.” 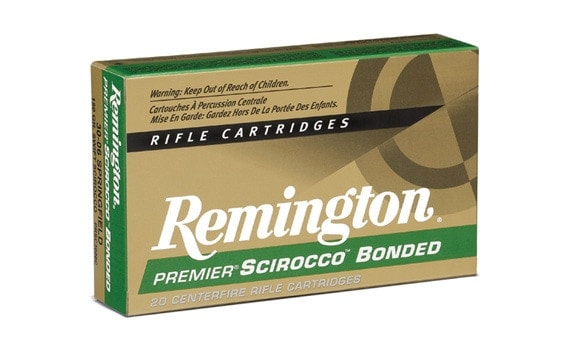 If you prefer a bonded core bullet, Kenny recommends a Scirocco. He also likes 30 calibers like the .300 Jarrett, (165 grain/3400 fps muzzle velocity) as well as 30-06 and 7 mm. They give you the velocity you need to take down a big hog at close or long range. And as Kenny likes to say, “Velocity kills.’

To find out more about Jarrett Rifles, visit www.jarrettrifles.com.