About 35 miles from Anchorage, the Glenn Highway crosses the muddy Knik River. Here, the river runs along the base of Pioneer and Twin Peaks before it empties into Cook Inlet just a few miles west. The land around the riverbank is dense forest that tapers into mostly grassy fields as you get farther from the mountains. The tracks of the Alaska Railroad are visible from the highway. 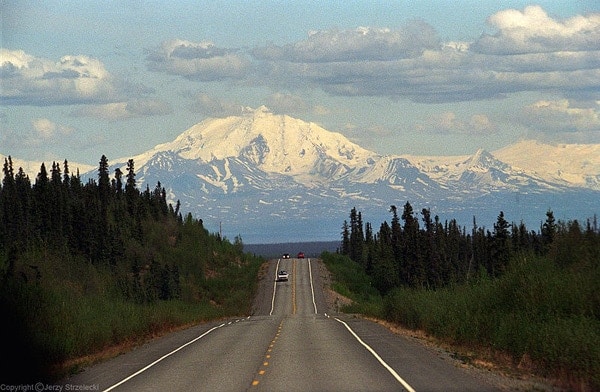 Moose crossing signs on the roadside warn of one type of animal that frequents this area. The moose gather here by the dozens during fall and winter. In fact, Matt shot a bull just last September after pulling over along this stretch and hiking less than a mile from the highway.

But the area, referred to as Rabbit Slough, is also abundant in another kind of game. It’s not as romantic as the giant moose or fierce bears that make hunting in Alaska the stuff of legends, but, for local hunters, bringing home a bounty of snowshoe hare is more than a fix between big game seasons. 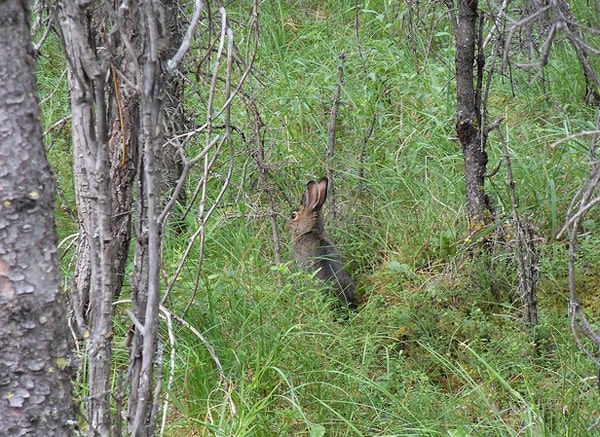 For Matt, it’s also a chance to watch his eight-year-old beagle, Mac, do the one thing he does well: chase down rabbits. When Mac starts getting restless (peeing on the walls and constant whining are sure signs), Matt knows it’s time to take the dog for a run. And he will run. And run and run and run until he is finally caught. Sometimes he is so wrapped up in chasing rabbits, that he isn’t caught at all until the next day. Matt has had to leave without the dog, then go back and get him in the early morning, several times because there is no stopping him if he’s on a trail. When the dog gets home, he tends to not move for days.

It begins with packing up for the hunt. Mac starts howling and pacing as soon as he sees Matt get a gun out.

If the snow is deep and blanketing the cover, Matt prefers his Stoeger Uplander in 20 gauge. The white hares are hard to see against the snow, and often you only get a glimpse before they disappear through a snowy bush. A quick shotgun is ideal for this type of snapshooting and the Uplander’s 26-inch barrel length and improved and modified chokes are a great combination of compactness and lethality.

When the snow starts waning, Matt uses his Ruger 10/22. The hares’ white fur remains for a few weeks after the snow is gone and they stand out against spring’s brown and yellow backdrop. Also, the hares seem to sense their vulnerability and move cautiously. For these reasons, shots tend to be a little longer at about 30 to 50 yards but with the increased visibility, can be successful. Plus, using a .22 and making headshots ensures that Matt can salvage much more meat than he can with a shotgun. 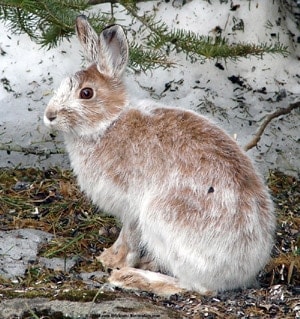 In the truck ride to Rabbit Slough, Mac hangs his nose out the window. About two miles before they actually pull over, the dog starts baying once again, smelling the familiar odor of the hunting grounds.

When they reach the pullout Matt gets ready as fast as he can. Mac’s barking is deafening inside the truck cab. If there are any other hunters around, they stop and watch as this crazy dog throws himself against the passenger side window, then the driver’s side window, rearing and ready to go. Matt fastens the leash and harness on the beagle. Without a harness, the dog will pull so hard with anticipation that he’ll choke himself out in the short time it takes Matt to get his boots on. 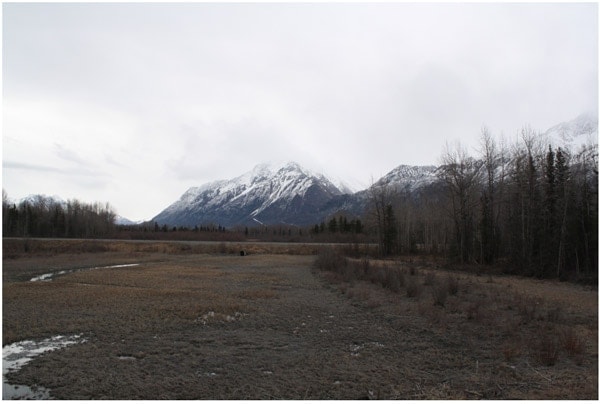 When he’s dressed and has gathered up his gun and pack, Matt collects the dog and heads off through a layer of birch and spruce trees toward the railroad tracks, a quarter mile away. Matt struggles to hang on to the Mac until they reach the far side of the tracks. If he lets go before that, the dog could catch a scent coming from the other side of the highway and blindly race across it to find his prey.

Once he lets Mac go, hunting snowshoe hares with the dog is mostly a waiting game, punctuated with brief moments of adrenaline. The dog will find a fresh track and follow it. As he gives chase, the hare takes off running but usually makes a circle back to the area from which it was originally flushed. 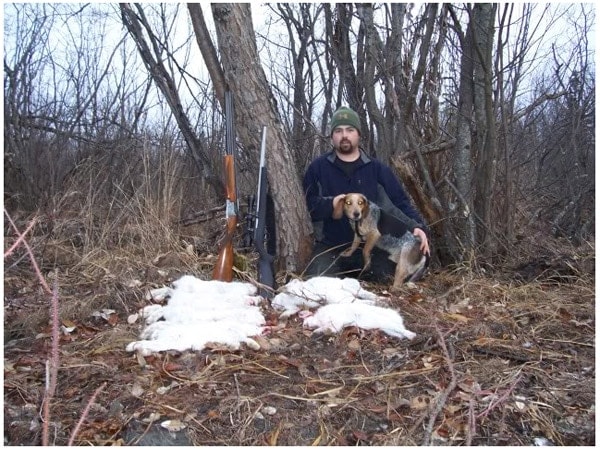 For that reason, a compact firearm is important in these hunts. Matt often finds himself sprinting from trail to trail, trying to figure out where the hare will be coming from or going to. It’s much easier to weave through a tangle of brush with a short, light gun. Both the Uplander and the 10/22 are great for mobility.

Matt prefers the double barrel of the Uplander in winter because if a follow-up shot is needed, he can get one off immediately and reload it without having to look or make a lot of movement. For springtime hunting, the stainless, synthetic .22 with its Leupold 2×7 rimfire special scope, is just as portable and fast-handling as his Uplander. The semi-automatic action of the 10/22 is nice to have in case of a miss on the first shot. Let’s face it: a hare head in the middle of the brush at 50 yards is a hard target. 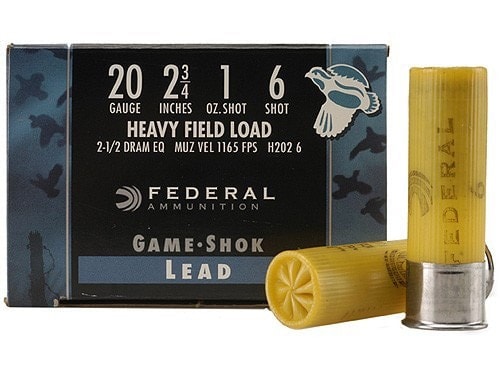 Matt’s preferred load in the Uplander is Federal Game-Shok Heavy Field Load Ammunition 20 Gauge 2 and 3/4-inch, 1 ounce of number six shot. With the myriad of choices available in .22 long rifle ammunition, several will shoot accurately in Matt’s 10/22. But his favorite is the CCI standard velocity in round nose bullet. Blazing speeds and whizbang designs aren’t necessary; a well-placed, 40 grain bullet plunking along at 1070 feet per second does the job just fine.

The Uplander also has two other attributes that Matt likes: an automatic safety and a good price. 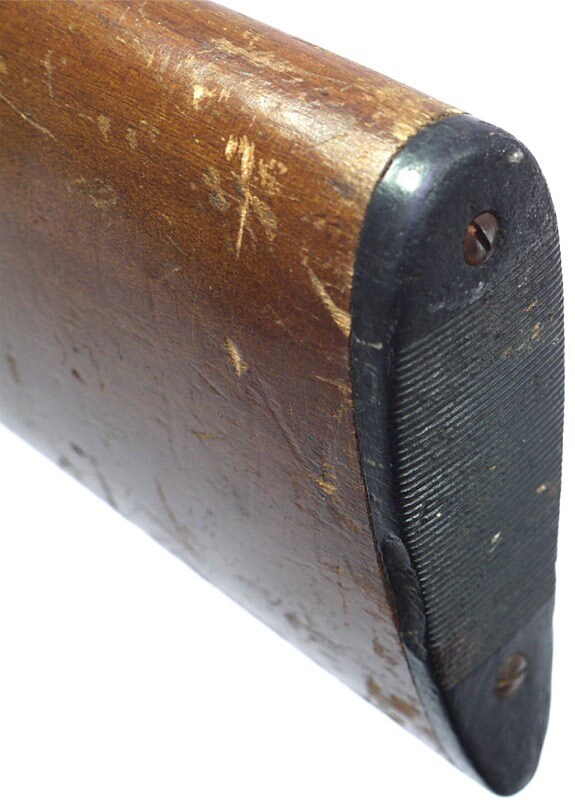 While no substitute for safe gun handling and common sense, an automatic safety is a nice feature to have when the action is fast and involves ducking and weaving through thick stands of alder. Also, hare hunting in Alaska during the winter is notoriously hard on guns. Matt’s Uplander is six years old but looks more like 20. The walnut stock has nicks, scratches, and gouges and the stain is getting worn thin on the forearm. The blueing still looks very good thanks to Matt’s liberal application of oil to his gun both before and after a hunt. It won’t be long, however, before the gun needs to be replaced. Luckily, that can be done at an affordable price. 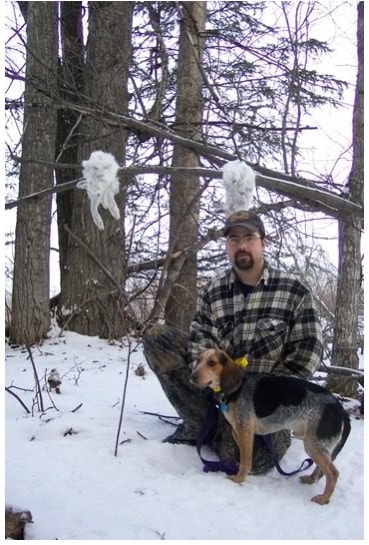 Mac howls the second his nose catches a set of tracks he is satisfied with. Upon hearing that first bark, Matt immediately heads to the area where Mac cut loose and, by listening to the beagle as he follows the hare’s circle, tries to anticipate the most likely travel route for the hare on its return path. If he has picked the right spot, Matt soon sees a flash of white bounding his way. He raises his gun and, when he sees the hare again, fires his shot.

If the shot is good, Matt and the dog have bagged their first hare at Rabbit Slough in less than 30 minutes. By the time Matt leaves an hour or two later (with or without Mac), he will have shot at least two more hares that ran right to him.