Because Money Is an Object: Five Dream Hunts for Real Hunters

Unless you’re swimming in liquid asset, our African Big 5 hunts were as much a fantasy as the Tyrannosaurus Rex hunt. All of these following five must-hunts combined may be beyond financial reality, or constrained by time or health considerations, or by limited availability; but note that they are, compared to Africa, local hunts for North Americans.

As such, they’re in the, “This could happen” category, rather than the, “As likely as Jennifer Anniston inviting you up to her place for the weekend” category.

Gray wolves have been extirpated in much of the world, but they are not endangered. There are so many, in fact, that some European and Asian nations still offer high bounties on them, as well as open seasons. Eurasia doesn’t really qualify as being “local,” but our options may be expanding. 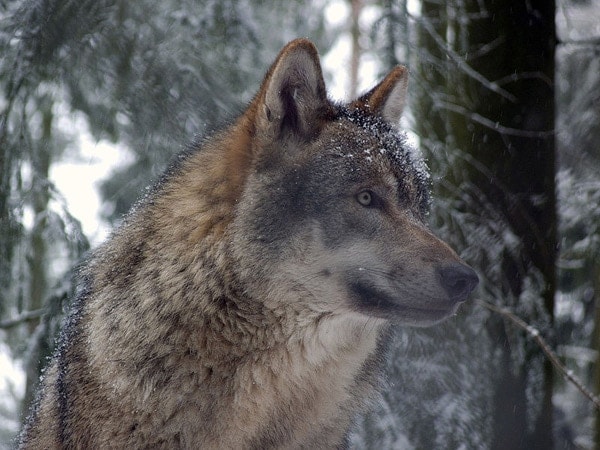 Gray wolf reintroductions in the Lower 48 have been successful. Wolves in Yellowstone, for example, are improving riparian habitat for fish, birds and other animals by preying on overabundant elk, which had learned, in the absence of wolves the past hundred years, to hang around streamsides and over-browse the vegetation. Now there are so many wolves in that area that Montana, Idaho and/or Wyoming is opening a wolf season in 2012. 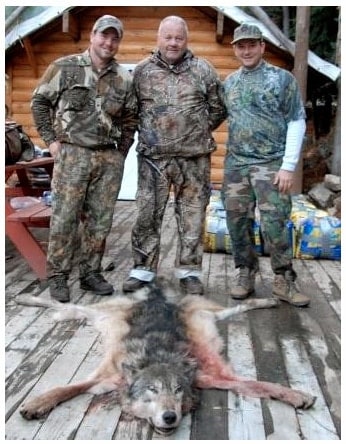 Rifle choice would be determined by hunt rules and terrain, but a scoped, flattop AR-15 in .223 is a starting point.

There’s a push on to hunt Mexican gray wolves reintroduced to the White Mountains of Arizona-New Mexico too, even though they are a species separate from the gray wolf and only a few hundred of these endangered animals survive. If it happens, it would be the first legal hunt of an endangered animal I ever heard of; opportunities would be limited, but so are Arizona bull elk tags, and somebody is getting ‘em…

Speaking of which, I got drawn for Arizona cow elk for 2011 – not as desirable as bull elk, but at least I got to hunt this season when thousands of other hopeful applicants don’t, poor bastards. You have a much better chance at elk hunts in other western states where elk are plentiful and tags are available over the counter; it doesn’t have to be a guided horseback hunt with heated wall tents and a camp cook, but wouldn’t that be nice? 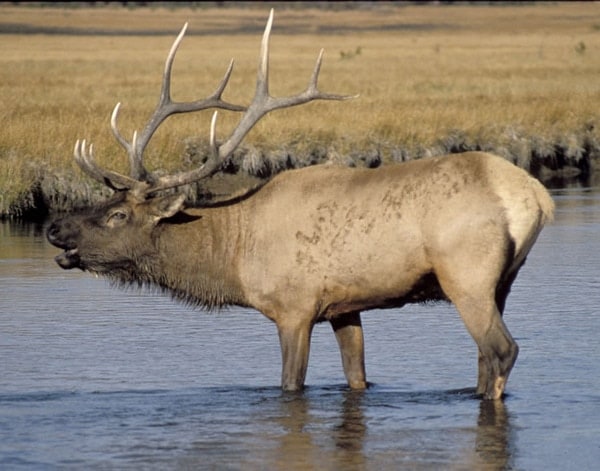 I recently saw a sticker on a pickup truck that featured the outline of a bull elk head and accompanied by the words, “Elkaholic.” That pretty much sums up this epitome of western hunting.

We should put a bird on this list, but which one? Turkey? Waterfowl? Pheasant? Dove?  Quail? Should we consider deer a must-hunt? Everybody hunts deer, so we could argue that, because of that, it isn’t a must-hunt, or we could argue it is because they do. 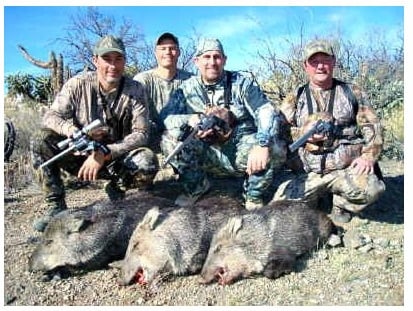 Instead, I’m going with archery hunting javelina. This one really pegs out the fun meter because, if you’re stealthy enough, you can get right on top of ‘em. Once while trailing a herd through the brush, I was smack in the middle of them before I realized it. Given that they’re lightning fast and all their teeth are canines and they have poor eyesight and may attack if they think they’re cornered, it was an exciting moment.

Quail season is still open during archery javelina season (January) in Arizona at least, so take your shotgun, too.

Now let’s go to the southeast and hunt hogs with a big knife. No kidding. I’m not sure I’m feral enough or big enough to take on a boar with a knife and make a humane kill, but for the 21st Century Hunting Man who is, it’s got to be the ultimate expression of gnarly human predatorness. 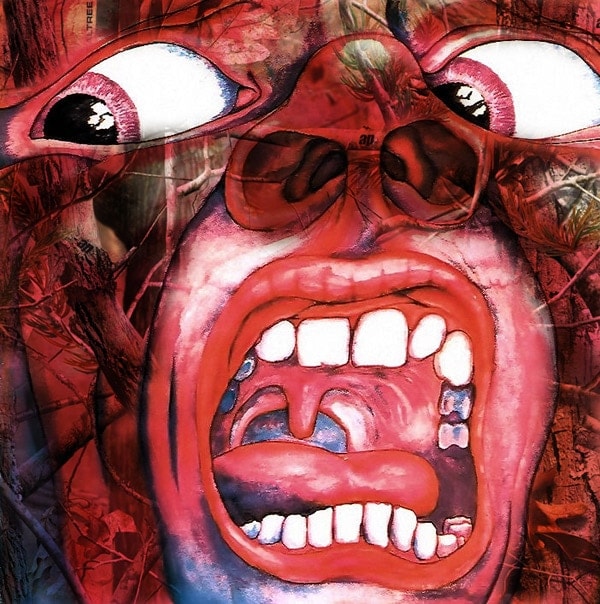 A quick online perusal turns up plenty of opportunities to shank a wild hog for less than $300. These aren’t game animals, they’re escaped livestock breeding in the wild, so the rules are different – in fact, in some places there aren’t any rules for hunting these pigs. So a real man could take ‘em out with fingernail clippers, or maybe a rock.

OK, my #10 must-hunt may seem off-subject at first, but if you get past preconceptions and consider it logically, it’s totally appropriate. And it qualifies as a dangerous game hunt. Like me, I expect you’ve hunted with a rifle; and like me, perhaps you’ve also hunted with a handgun and a muzzle loader, and archery hunted as well. Now, let’s hunt with a spear. Underwater. For the venomous lionfish. 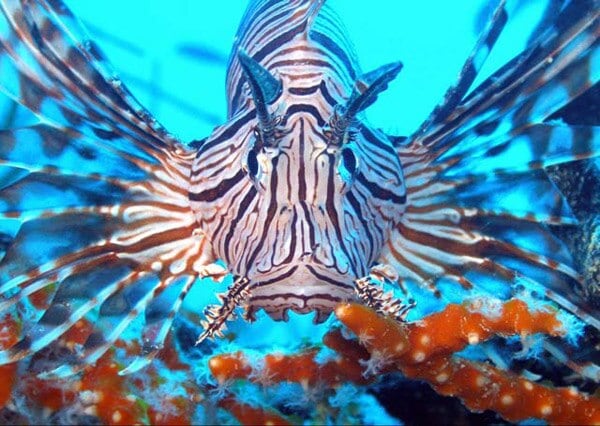 Why not a shark? Several reasons, but the important one is that sharks are in serious trouble. Commercial fishermen kill 70 to 100 million sharks every year, mostly for their fins to sell in Asia, where shark fin soup is in vogue. Few landlubbers know or care about the decimation of sharks, but think about this: The world is 70 percent ocean, and you can’t upset the balance of 70 percent of anything without screwing up the whole. But that’s a topic for another pub discussion. 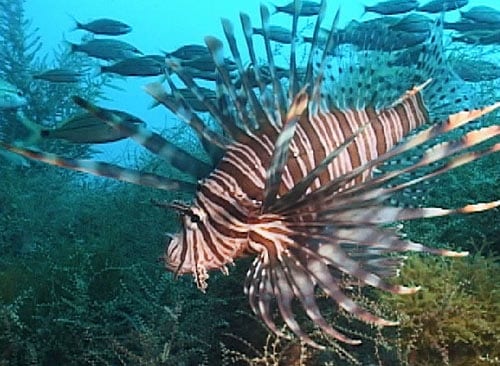 Hunt #10 is in the Caribbean, 40 feet down on a Florida coral reef, where the lionfish is an incredibly destructive invasive species because it has no natural predators there and it is staggeringly prolific. It’s easy to get close to lionfish, but you gotta make sure you make a killing spear thrust or shot, because you don’t want this wounded guy careening into you. His long, graceful fins are venomous; the venom probably won’t kill you, but it will certainly ruin your week, and if you panic 40 feet underwater…

Lionfish meat is white and flaky, great for frying, but better grilled on a beach or dock. Accompany with cold drinks, ample bikinis and a few hammocks. Hmm…maybe this one qualifies as both a dangerous game hunt and a dream hunt.