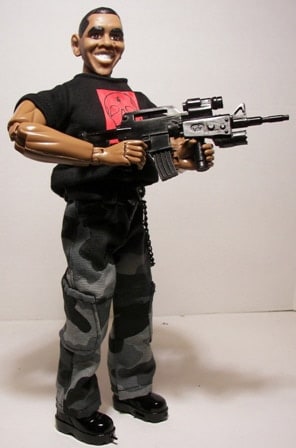 With the Mouse looking to get his creepy cartoon gloves all over the SEAL Team Six name, Guns.com saw the writing on the wall when it came to the inevitable cascade of merchandising around America’s “freshest faces.”

Cue the onslot of T-shirts, coffee mugs, comics and action figures.  And frankly, we support it.  Someone wants to buy it, so let someone make it.  If we ain’t fighting for that, then what are we fighting for?

But here’s one piece of swag we suspect the Guns.com crowd will appreciate knowing about because this action figure isn’t patterned off some indistinct, GI-Joe looking, rough mother-effer or even an actual member of SEAL Team Six.  No, it’s a dieseled up President Obama with an M1 and a Navy SEALS 6 t-shirt.

A company called Hero Builders just started making the action figure recently and they call it “Rambama” (like Rambo and Obama.  Get it?). Owner and operator Emil Vicale founded Hero Builders after listening to then-President George Bush’s speak from Ground Zero three days after the events of 9/11.  He explained to a local NBC station earlier this week that, 10 years later, he was inspired by President Obama’s state-of-the-union after the killing of Osama bin Laden by the elite Navy Special Force unit to create the doll. 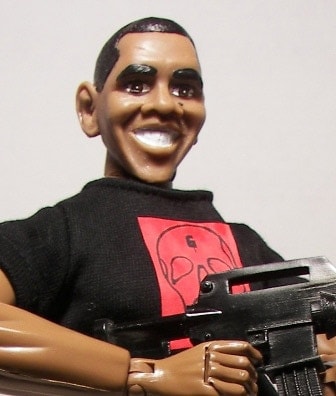 The company already sold Obama dolls, which isn’t really weird but they also sell dolls of him as the Joker from the latest Batman movie, which is weird (is that suppose to be an insult or a compliment? And still why? We don’t get it).  But that sort of seems to be their shtick: out-of-sorts dolls of politicians, though it also looks like Hero Builders will customize a doll to look like anybody.

No word on how they’re selling, but Guns.com’s spidey sense is tingling about this whole affair and all you got to do is check out their order page to see something doesn’t add up.  Underneath a product description there is a comments section that reads “READ WHAT GREAT AMERICANS ARE SAYING ABOUT THIS DOLL.”  But then all the comments are laying into Hero Builders for making the damn things. We’re serious. It’s worth just checking out.

And once again, we don’t get it.  Is it a mistake?  Did anybody at the company notice it?  Is it suppose to be ironic? Are they mocking these people (we don’t really know how they are) or do they think a bunch of disapproving comments under your product is how you move merch?

Don’t think about this too long, guys.  You’ll be paralyzed by confusion and die of starvation.