Mention the words fast draw to someone and the first thing that comes to mind will probably be two gunfighters in an old west town standing on opposite sides waiting to clear leather with their single action Colt’s. Nothing could be further from the truth. As usual Hollywood depicted the gunfighter taking out a bad guy without aiming at a ridiculous range, but this does not mean that the fast draw has no place in a shooter’s arsenal.

In modern times the term fast draw gave way to another term, hip shooting. It was practiced by such six-gun alumni as Bill Jordan and Ed McGivern, whose speed with a revolver from the hip earned both a place in the record books.

You can practice hip shooting with any handgun, but just keep in mind there’s more safeties now that you have to deactivate to get the gun into action. Never do anything with those safeties that makes your gun unsafe to shoot. 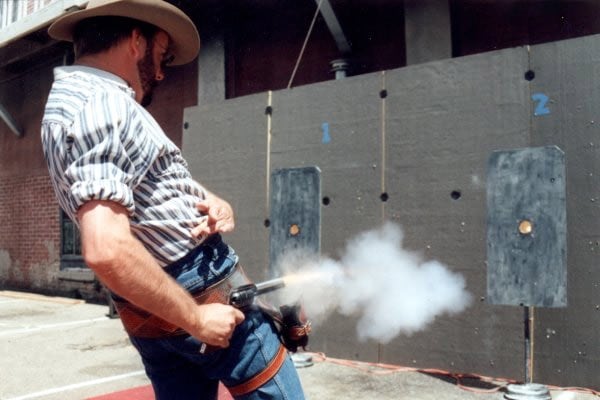 Remember that hip shooting is a close range affair, and I mean counting nose hairs close. The whole reason you are using the gun from the hip is that you don’t have time to bring the gun up to a proper two handed shooting position. So to practice this you want your target in the 1 to 3 yard range. 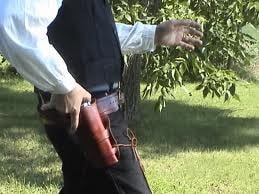 The best way to start off practicing drawing and firing from the hip like this is with an unloaded gun. First practice the draw to make sure that you can get the gun out of the holster without any issues. Do this slowly. As the old saying goes, you have to crawl before you can walk. You are looking for consistency and repetition. The draw should be in an arc like a semi-circle and very smooth. Once you have this down you can move to the range. 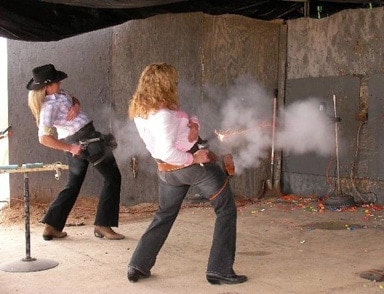 With your silhouette target in front of you, start off the draw very slowly and try to put one shot in the vital area. Resist the temptation to do it quickly and resist the urge to look at your sights. Your eyes should never leave the target, ever. After that first shot, put the gun back and do it again, hit or miss. That first shot is what matters. 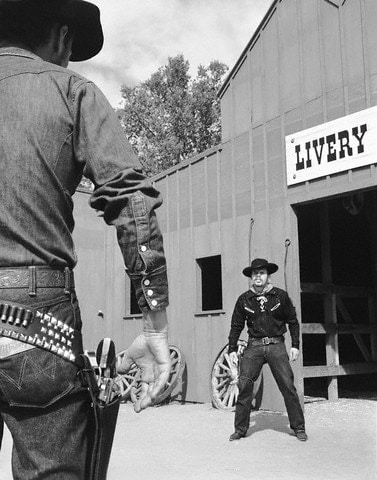 The more you practice getting that first hit on target, then you can speed up your draw, but again make sure that you are doing it safely. If you get too fast and start missing the target then back off a bit until you can get those bullets where they need to be. From there you can add a combination, like firing a shot from the hip and then transitioning to a two handed hold. Again though, never take your eyes off of the target—that’s where the threat is.

The fast draw has been dismissed by some as showboating who maintain it has no place in defensive shooting. To thee I say that is nothing but bovine excrement. The fast draw when well executed and at the proper distance—with practice—is one of the most important tools when it comes to protecting your life and those of your family, and you don’t even need a ten gallon hat to pull it off.