The Guns of Scarface: Say 'Hello' to my little friends

Spoiler Alert: While it’s highly unlikely anyone on this site hasn’t seen this movie, the following article gives away its ending.  Consider yourself duly warned.

Say hello to my little friend.  Along with the .44 Magnum bit in Dirty Harry, this line is a good contender for the most famous yet delivered about a firearm in all of filmdom. 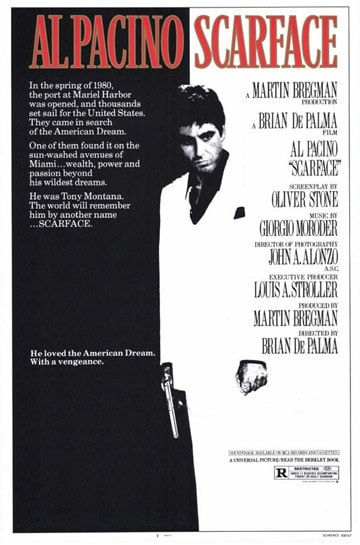 It belongs, of course, to Al Pacino’s character, Tony Montana, aka Scarface.  He says it in the film’s climatic, gun-orgy-of-a-scene as he introduces a double-clipped M16A1 with attached M203 40mm grenade launcher to his “house guests”, a squad of heavily armed assassins sent by Alejandro Sosa (Paul Shenar), the Bolivian cocaine kingpin.  The result is some serious carnage; think Animal House meets Apocalypse Now! Anyway, in high school in 1983 when the film came out, we couldn’t get enough of it and “Say hello to my little friend” became our tag line for all kinds of goofiness—some of it funny, most of it crude.

But the M16A1, the film’s little friend, had a whole host of buddies who went bang as well.  Let’s reminisce and meet them all, shall we?

Tony Montana wore a sidearm, a Beretta Model 81, as normally as he wore clothes.  It’s the pistol he pulls on Frank Lopez, the cocaine kingpin who first gave Tony his start in the drug business, but then who later tried to have Tony killed at the disco.  That made Tony mad.  Surprising Frank and corrupt Miami Detective Mel Bernstein after the botched hit, Tony and his sidekick Manny dispatch the pair in a classic scene.

The first automatic weapon we meet in the film is a MAC-10, complete with suppressor.

That seriously hard-looking – yet disturbingly alluring – chick from the Columbian drug gang holds one on Tony while the bad bad guys chain one of the good bad guys to the bathroom shower curtain for the gruesome chainsaw scene.  (By the way, Scarface was the first movie to have ever earned an ‘X’ rating for violence alone, a mark of box office poison that forced director Brian de Palma to seriously tone down the gore; the Scarface that we know and love today is this kinder, gentler version.  Jeez.  Sort of makes the mind reel.)

Another great gun is Scarface is the classic Uzi, the Israeli made machine gun that burps more bullets than a frat house of college boys burps beer.  Chi Chi, one of Tony’s sidekicks with him from the botched Colombian drug deal days, uses one to welcome his boss’ unexpected guests in the film’s final scene. 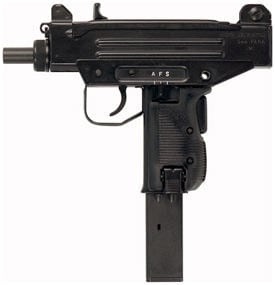 And let’s not forget the Smith and Wesson Model 36 .38 Special that Gina, Tony’s sister, absolutely sucks at when she tries to kill Tony, too.  (Tony made her mad when he killed his sidekick Manny, Gina’s secret beau).

But back to that final scene, the “Say hello to my little friend” scene, which, if you pause it and know what you’re looking for, can spot a Remington 870 12 gauge shotgun, a Valmet M82A, a Heckler & Koch HK33 and, of course, that sawed-off, double-barreled Spanish Zabala, the one held by that truly wicked-looking guy who sneaks up behind Tony and blasts both barrels into his back at point blank range.

To conclude, it’s hard to believe that some people actually live like this, and, to be honest, I feel a little guilty that I enjoy this film so much.  Every now and then, I’ll dust off a video and pop it in the VCR, (yeah, I still have one), pop some popcorn, ice down some cold ones, and invite over all of my little friends. 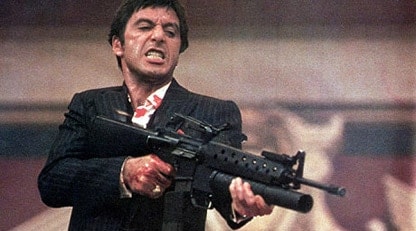