Puff the Magic Dragon Frolics in a Land Called Vietnam: The Douglas AC-47D

The Douglas AC-47D side firing aerial gunship, the adaptation of the lowly C-47 Skytrain cargo plane, was described as “just fucking scary” from someone who had seen a lot of the Viet Nam War. “The amount of firepower this little airplane could place right on target was just not credible … but I watched it happen”. 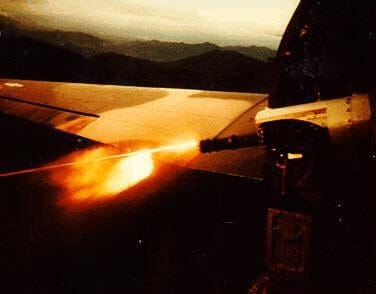 The enemy called them ‘Dragon Ships’ because they spewed a stream of red phosphorus tracers that hurtled into VC targets.  To 1960s servicemen they were Puff the Magic Dragon breathing internecine fire.

An AC-47D could put down 18,000 rounds per minute with its three General Electric 7.62mm SUU-11A Gatling Mini-guns, totalling of 54,000 belt-fed bullets on each flight. There was a crew of seven.  Originally it was a cargo carrier, so Puff could literally carry a ton (909kg) of 7.62mm NATO.  The plane could blanket every square foot of a football field in 60 seconds and stay aloft for hours patrolling and protecting US troops which was its main task and thus the affectionate nickname from the soldiers. 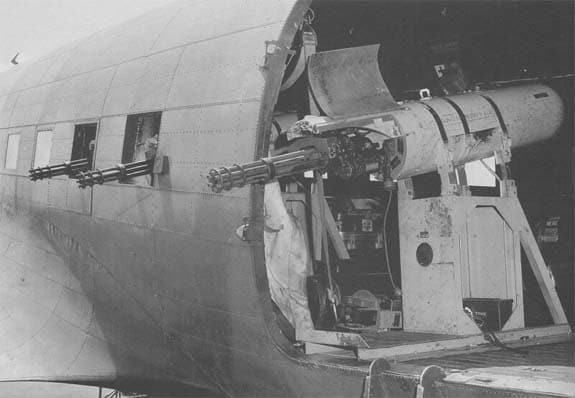 This aircraft did not start out as a fire breathing dragon, more like a leaf eating sloth with a top speed of 220 knots, but a load capacity that made it the beast of burden for WWII and Korea.  Douglas C-47s had been in extensive service in Viet Nam prior to the French handover in 1955. 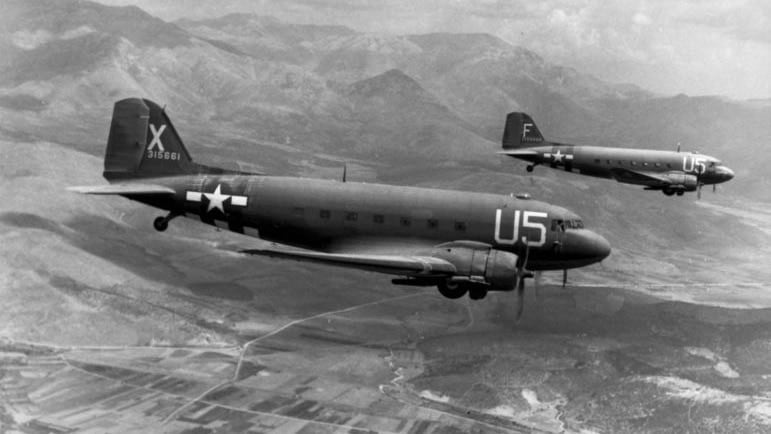 Responding to a 1955 request of the departing French, the USA stationed USAF Technicians, initially to service and then train the fledgling Republic of Viet Nam’s mechanics on the in-country C-47s. The squadron of Douglas planes was based at Tan Son Nhut AB outside of Saigon. That is how US involvement started and seemed innocent enough at the time.  Advisors moved in and then troops. 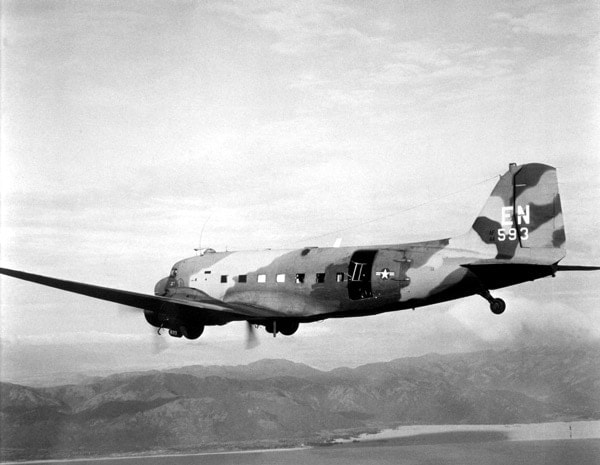 USAF Captain Ronald Terry was assigned to the Aeronautical Systems Division and was a visionary. While on an inspection tour of Viet Nam in 1961 at the time of the first US troop escalation, Terry specifically sought out the existing squadrons of C-47s and upon assessment conceived an audacious plan.

Recalling once observing a Skytrain delivering mail in treed jungle, Terry was intrigued by the improvised airmail system using a dangling collapsible canvas bucket on a lengthy rope, the pilot performed a manoeuvre called a pylon turn, a very steep 30° port turn but continuing the full 360° in a tight circle. Improbably, the bucket and more importantly the rope always maintained stable position.
This aeronautical idiosyncrasy was originally realized in air-racing as 1920s daredevil pilots barnstormed around end marker pylons.

Terry correctly deduced that the manoeuvre could be used in combat. Substitute a stream of machine gun fire for the rope and simply widen the turn to widen the coverage.

Apparently Captain Terry had considerable sway with USAF General Curtis La May and after an explanation and a strong presentation, Terry was put in charge of Project Gunship I. The transformation of the Douglas C47 Skytrain was underway.

Through means unheard of in the military—independent thought, coupled with a Commanding Officer willing to take a chance—Captain Terry was able to develop a new category of high impact weapons systems with minimal expenditure that far exceeded their goal. 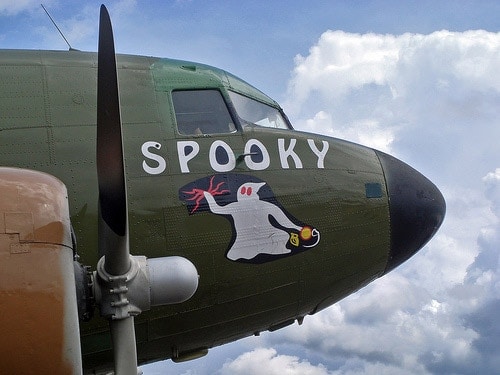 Introduced in 1964, call sign ‘Spooky,’ the gunship was an instant success.  An AC-47D could quickly shatter enemy assaults on hamlets or hit hill encampments and bunkers, isolating ground targets and methodically quashing each. They could lay down murderous fire for helicopter landing zones as well as clear an obstacle for jet fighters. Nothing could withstand their full barrage.

The Mini-Guns were fixed in position on the port (left) of the aircraft protruding from windows five and six as well as filling the cargo doorway. The pilot looks through a sight on his port side window and when he went into a ‘pylon turn’ he could look down and hurtle constant fire onto enemy troops. He tilted the plane to aim the fixed guns while firing with a trigger release on the pilot’s yoke. They could shoot independently or in unison aiming the aircraft to aim the weapon—it was lethal. 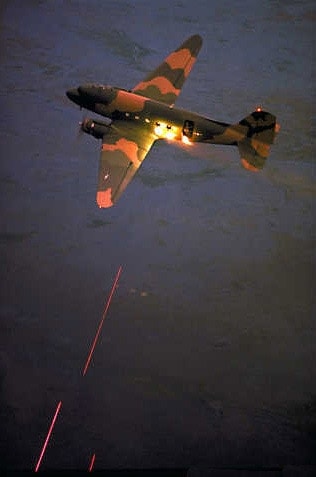 Marine ‘hill hopper’ fire teams were choppered from peak to peak providing spotting intelligence and ambush info for the Ho Chi Min Trail. Due to US bombings the enemy had inverted their circadian rhythms stopping all daylight activity, transferring essential supplies, armaments, vehicles and troops from dusk to dawn with impunity.  The orders were straightforward, stop the night traffic.

How you went about the task was dependent on what you saw from your fire team’s observation post. Artillery or mortars were effective for large troop movements on the Trail that was more like a highway.  If your position was under assault you called for air and hoped for Puff as the AC-47Ds brand of close air support was the most effective and the least dangerous to you.

Fighter Jets were certainly a fast option if they were in the vicinity, but once they unloaded napalm and anything else they were packing it was back to the carrier to refuel, rearm and redeploy. Helicopter gunships were only called in a crisis.

Puff put the VC on the run simply by the threat of their massive firepower.  The guns could instantly transform dense jungle into lawn clippings, so at the first sound of the AC-47D the retreat was on, providing a serious morale boost for US troops. 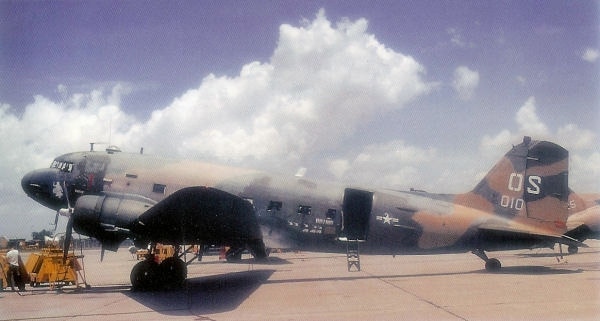 The AC-47D squadron began to make a big impact and was seriously upgraded to 4th ACS, (Air Commando Special Operations) which is a significant achievement for a weapon system and aircraft configuration, not in service until 1964.

As happens in the military the move to improve occurred and Project Gunship I was superseded II, III and IV replacing Puff who reigned supreme from 1964-1969.

Faster and better equipped planes followed in the role but the transformation of the little cargo plane that could, has been etched in the memory of every Viet Nam Vet.