This is a fully-automatic 1911, in .45, that shoots “somewhere in the neighborhood of 1,000 rounds a minute.”  To make things clear how rare and awesome that gun is, there exist maybe five in the world.

That gun is so rare even the stock is rare, and a 1911 stock runs about $500 by it’s wooden self.  The stock is so rare we’re showing off pictures of other completely normal 1911s because we can’t find enough with stocks. 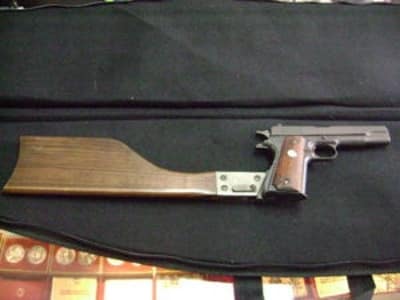 OK, we all agree here, shooting $4 in ammo with one pull of a trigger isn’t a waste, right?  It’s science and art and great literature all rolled into a serious noise.

That being said what has to be the most amazing thing about this 1911 is how simple the automatic system is.  It’s got an extra trigger that peeks out above the right grip panel.  When the selector lever is in pushed down, the action of the slide, having already cocked the hammer, releases it. 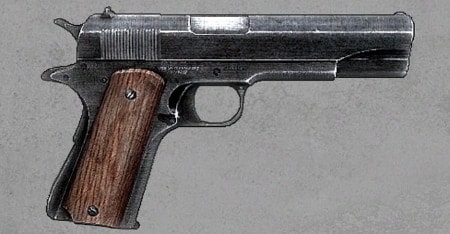 As soon as everything locks back up, wham!

But the guy isn’t doing himself any favors by calling it a “machine gun”.  It is a machine pistol, or less accurately a sub-machine gun.  Saying dumb things like that might make other people question whether or not he’s worthy of owning such an incredible firearm… So congratulations Mr. Fully-Automatic 1911.  You currently have the entire gun-owning population’s admiration.  And if anyone knows his home address and work schedule, let us know so, uh, so we can schedule an interview with him.  Yep.