The affinity between guns and guitars has been a path well trodden, so without what would have assuredly been yet another classic Guns.com intro, here’s the rundown on one guitar that became a gun (well almost) and a bunch of guns that are becoming guitars.  Enjoy, shooters: 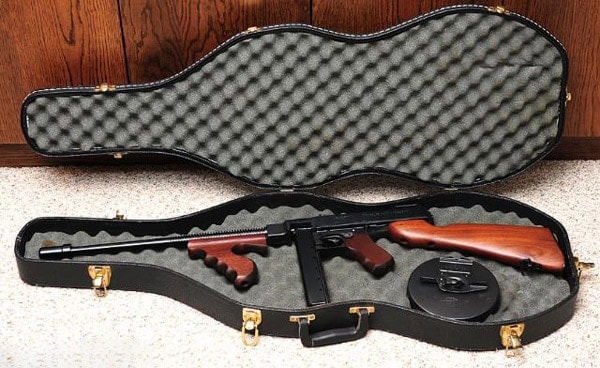 Last November, police in Sweden, acting on tip, pulled a jerry-built shotgun guitar from the apartment of a Lulea resident during a raid that also uncovered six additional unlicensed firearms including a home made sub-machine gun, a sawed-off shotgun, a pair of revolvers, a Mauser rifle and a walking stick rigged to be used as a rifle.

Police suspected the 54-year-old man of supplying local gangs with weapons but, throughout questioning the man, whose name has not been released since November, maintained that the guns were a form of therapy to “keep off the drink”.

In the course of the raid, police “just had a feeling” about a suspicious guitar mounted on the wall.  Upon closer inspection, they discovered the neck had been hollowed out to fit two shotgun barrels and the body showed the beginnings of a trigger mechanism.  The man explained that the musical weapon was “a fun thing that was not finished.”

The man’s connection to gangs was however evidently corroborated enough to charge him with receiving stolen goods and aggravated weapons crimes after several “stickers” (we have not an idea what they mean by this.  Are the Swedish so considerate their gangs don’t grafitti their symbols, they use stickers?) bearing the insignias for three known gangs in the area.

Police did say however, that given time and materials this could have been the world’s first functional guitar gun (and we’d bet green money, the Nuge would be on that statement quicker than a jackrabbit on a date). 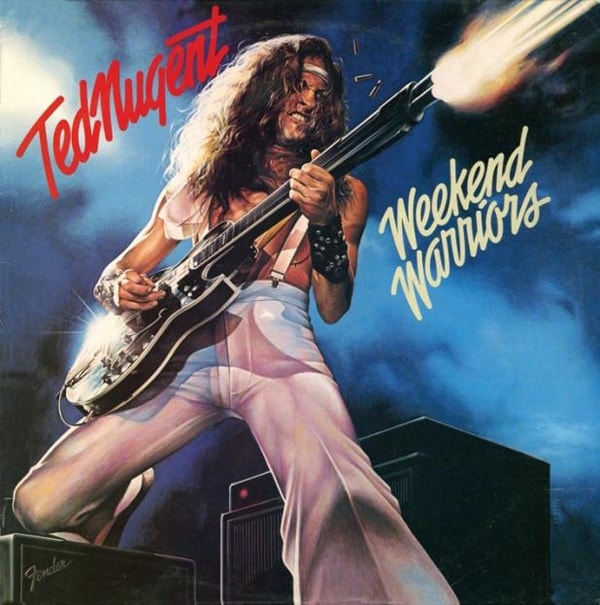 Which is a harmonious little segue into our next number: guns made into guitars!

César López, a sculptor of Columbian extraction, has achieved both artistic and political successes adapting guns into guitars—then playing them on the streets of Bogota. The instruments are called escopetarras, a portmanteau of the Spanish escopeta meaning “rifle” and guitarra meaning, well, guitar. 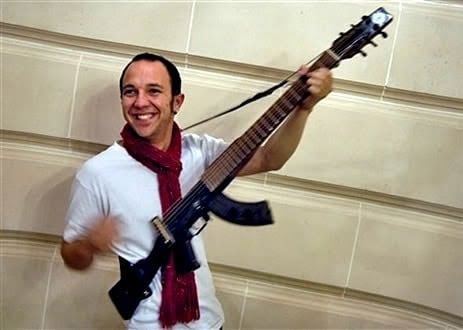 The idea came to Lopez back in 2003 when, while playing in front of a Bogota country club, he witnessed a car bomb explode.  In the ensuing confusion, he noticed how the army guards all carried their rifles in a manner that resembled the way he carried his guitar and out of that explosion came the first escopetarra—a Winchester rifle/Fender Stratocaster hybrid.

And in the context of a drug and money fueled war raging in South America’s cocaine Mecca for over two decades now, for López the escopetarra is a statement about the current climate of his native country. 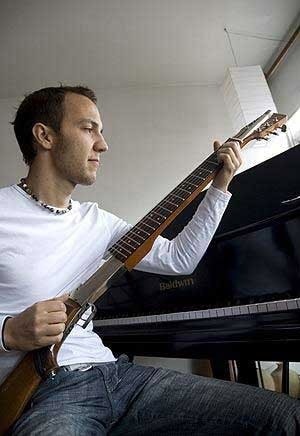 López told the Miami Herald, “A weapon means intimidation, destruction, and death.  A guitar represents life—creativity and construction. When they unite, they create an object that symbolizes transformation. It’s a symbol that anything can change.” 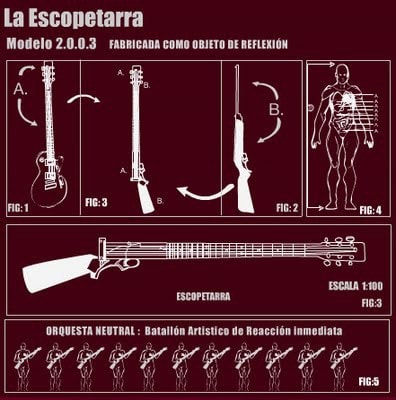 In the past 5-years, Colombia has seen a sharp decrease in violence, often credited to investments in infrastructure, education and the arts rather than fighting drug runners and paramilitary groups.  For his part, López’s work has landed in the hands of Bogota’s mayor and the artist received 12 AK-47s last January from Colombian Vice President Francisco Santos, all acquired from right-wing paramilitary groups during a two year old piece process that demilitarized 24,000 guerilla fighters. 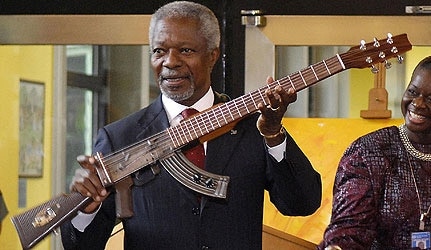 López does not sell his creations nor does he expect money from patrons of his music.  Rather he hopes listeners take away from his work that, in his own words, “in the end the gun dies and the guitar is born.”