Walk through any gun shop or any gun show and often times you are bound to find a few old leather holsters that are sitting collecting dust. These usually come in on trade, are pretty well worn, and once the shop owner gets them; he has a heck of a time getting someone to buy one as they have seen better days. The good thing is that you can buy the holsters for next to nothing, sometimes for nothing if you can get them thrown in as part of a deal. Most are old duty holsters, which are excellent for hiking and hunting and once cleaned up and restored, cost far less than a brand new holster. 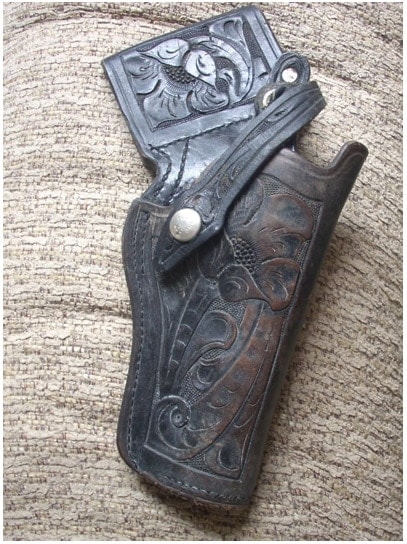 Last year I was perusing the aisles of one of my local gun shops and I found an old nail cask with a bunch of old holsters at the bottom. One was a very nice Tex Shoemaker leather duty holster. What was unique was that the holster had beautiful floral carving but the finish was well worn and it was full of dust and cobwebs. The shop owner gave me the holster saying that I could have it for free if I could make it look good again. 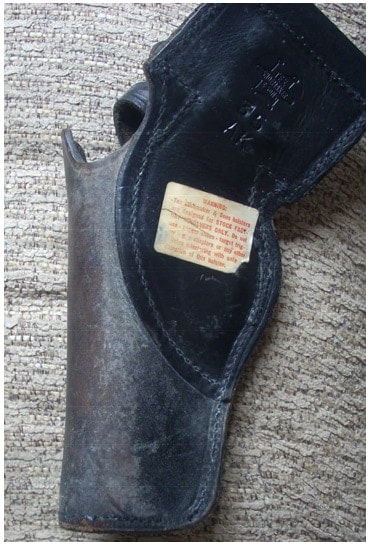 When I got the holster home I took a damp cloth with some warm water and cleaned off both the inside and the outside. The leather was still in excellent condition, including the restraint strap, but it was very well worn all over.

I went out and bought some Kiwi Black Leather dye and went over the entire holster. Once the dye had dried, I gave it a second coat, and then a third for good measure. After the dye was good and dry, I then got some Kiwi Leather Lotion which after I rubbed in gave the holster a nice luster as well as protected the leather. The holster now looks like it is brand new, and I ended up using it in a service revolver match at a law enforcement shoot where it got a great deal of attention. 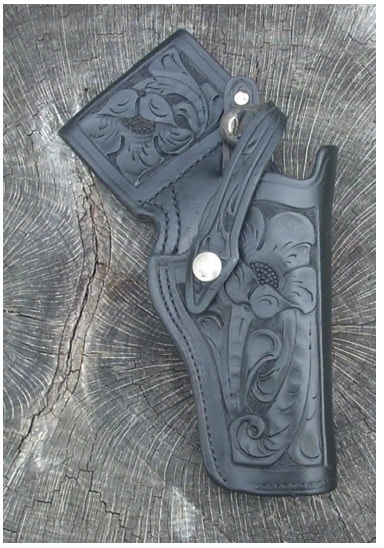 So far since I have started buying secondhand and worn leather holsters I have purchased several from some well known makers including Bianchi, Don Hume, Bucheimer, and Desantis. Many have been just given to me or sold for less than $10, well worth the money when considering the cost of new gun leather. 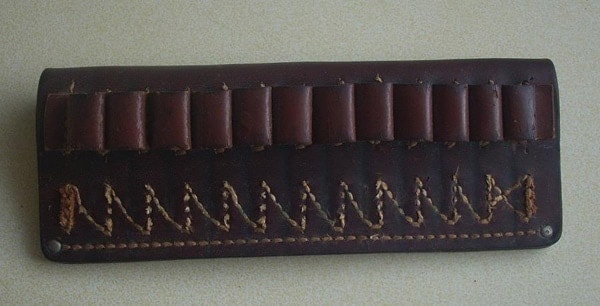 This just doesn’t apply to holsters; I have always had a thing for old cartridge slides and old speed loader pouches since I am partial to revolvers. Sometimes you can get them thrown in with a holster, many times I just ask and the shop owner who is tired of looking at will just give it away when you buy something else. One such cartridge slide was an old Bucheimer that was given to me when I bought some reloading supplies. It was originally for large rifle cartridges with two sets of loops but the bottom set of loops were pretty worn and rotted so I cut them off and trimmed up the threads with a set of nail clippers. The slide was originally brown but using the same Kiwi Black Leather dye I gave it three coats and followed it up with the Leather Lotion and now it holds my .41 Magnum rounds quite well. 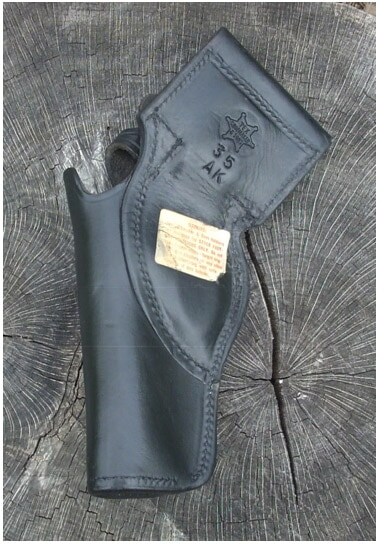 Some of you might be saying to yourself that you don’t like old leather holsters for your guns. That’s fine, because I have taken more than a few of these holsters and resold them for a profit. I have purchased several $5 holsters and sold them for much more. I don’t ask for a fortune, and others who are looking for a good piece of gun leather get a good holster. I found a nice Bianchi holster that had a little wear and grime but only needed a decent polish to get it looking good again. I bought it for $5 and sold it the next day for $25. I have done this quite a few times and made out handsomely for only a few dollars and a little work. 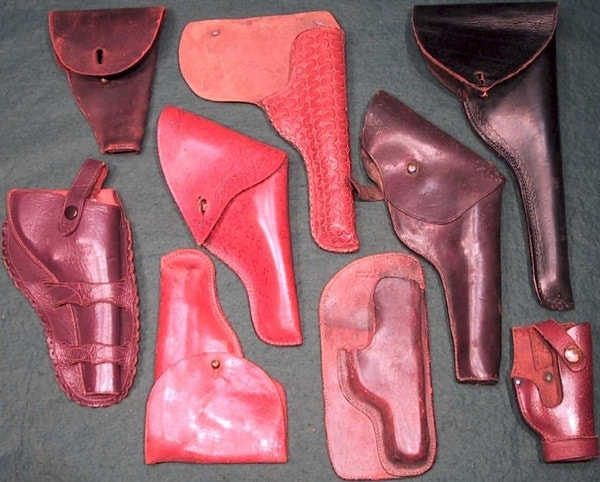 The best way to get a deal on holsters like this is to offer the shop owner a deal on the whole lot. Usually the old leather holsters are all in a box off to one side gathering dust. I have gone to gun shops and seen the same old holsters in the same place for years. Believe me, after a while the owner gets tired of looking at them and you can often get the whole thing for little. Even if there are holsters in the box that doesn’t fit any gun you own, someone has a gun to fit that holster and you can supply him with it. In this day and age, good new leather holsters are not cheap, and more than one hiker or hunter will buy these for their gun on their hip, especially the old duty holsters as they are double tough and cover the whole gun. They are also very comfortable after a long day as they ride lower than concealment holsters. Believe me, if you get good at fixing these old holsters up, you won’t have any problem getting rid of the leftovers. Just think of the possibilities.

So when you are at your local gun shop or at a gun show and you see a box of old forlorn holsters that are covered in dust, remember that with a little work and some time you can have a nice trail holster for your favorite revolver during hunting season or you can turn them over for a few bucks if you play your cards right. You might even have enough left over, to buy more holsters!