How We Say Good-bye: A Look at Military Funerals

This Memorial Day people across the country will attend parades and ceremonies, visit cemeteries, and host barbecues or picnics as a way to honor those killed while serving in the military. In other words, they’ll do as they do every year. It’s a routine, but then again it’s difficult to thank those who’ve died for us. All we can do is remind ourselves who they were and what they’ve done, and understand the ceremonies we practice to place them for eternal rest.

The public is most familiar with a regular honors military funeral services, which, depending on the status of the serviceman or woman, can include a gun salute, Taps and flag folding. The whole shebang is typically reserved for current members of the armed forces, or retired military. Those who had once served (a single term or drafted) can have a military burial at the request of family, however, the ceremony usually consists of a flag presentation and Taps.

The service begins when the coffin enters the cemetery. An honor guard—six men or women in dress uniform or service uniform—salutes the fallen. The honor guard will carry the casket, draped in the US flag, to the grave.

Flag draped casket – Covering the casket with flag signifies simply that the dead served his or her country. The tradition dates back to the Napoleonic wars, where the dead that were removed from the battlefield were also covered in their country’s flag. 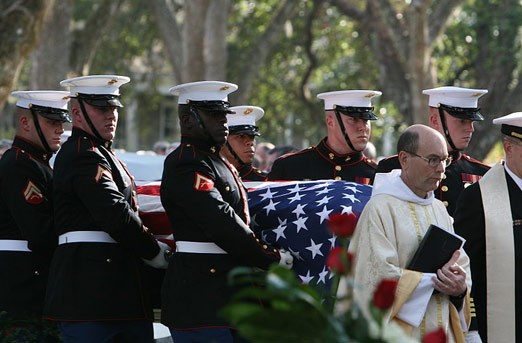 Once at the gravesite another group of three or seven will begin the 3-volley salute.

3-volley salute – Each rifleman holds an M1, M14 or M16 and they will all fire three sets simultaneously. Its origins come from long ago when firearms were still relatively new. Two armies would fight against each other on a single battlefield. Both sides would agree to a ceasefire so they could clear the dead from the field, and when they finished they’d shoot three times into the air to communicate that they were ready and the battle could resume. 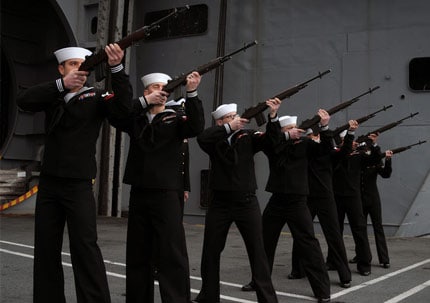 Don’t confuse a 3-volly salute with a 21-gun salute. A 21-gun salute is typically done with cannons and signifies the ending of a battle, war or era.

After the 3-volley salute, the rifleman present arms, meaning they hold their rifles in front of them (it’s a type of salute) and then begins Taps.

Taps – At a funeral, a bugler in uniform will play this melody. If you’ve ever been to a military base around nine or ten at night, Taps is played for lights-out. It’s a soft, simple, and soothing tune, yet very emotional because its presence must be at every military funeral. Unfortunately though, there has been a steady decline of buglers, so a electronic recording is often played.

Once Taps is completed, the honor guard presenting the flag begins to fold it.

Folding the flag – The flag represents the living country and is folded 13 times. Each fold holds its own significance. According to usflag.org, in the end the flag is supposed to be “folded into the shape of a tri-cornered hat, emblematic of the hats worn by colonial soldiers during the war for Independence.” 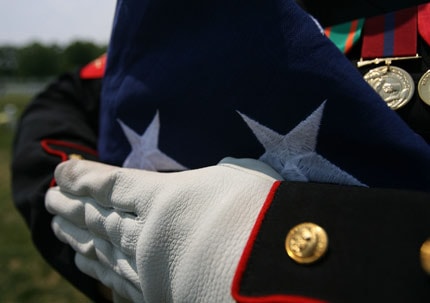 The flag is passed to the senior non-commissioned officer or officer present within the honor guard. He or she will then walk over and present the flag to the next-of-kin.

Presenting the flag – The flag is a token of appreciation for the fallen’s service. It is offered with kind words specific to their particular branch. 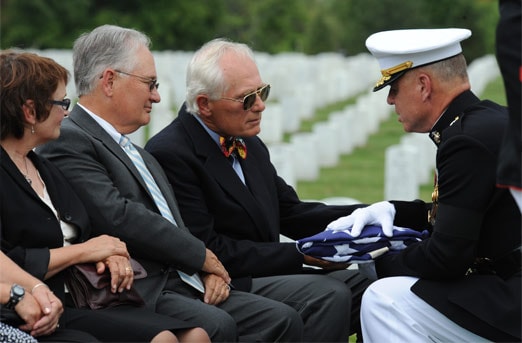 Once the flag is presented and the transaction is complete, the honor guard will then march off.