What's with New England Politicians and Pulling Out Guns?

There must be something in the bottled water in New England. Guns.com is serious about this—if you’re a reader residing in the great states of Maine, New Hampshire, Vermont and Massachusetts (we consider Connecticut to be a borough of New York City) you might want to think twice about going to that town hall meeting, or at least not without your carry in tow (and let’s be clear on this, that was not a call to assassinate politicians.  That’s a serious warning).

Aubrey “Bud” Groskopf, a Republican selectman (a traditional New England executive branch position that differs in function from state to state—we never heard of it either) from Cape Cod, freaked out a room full of town folk (and other candidates for his job) when he pulled out a fake handgun at a forum meeting in Yarmouth and put it to his head. 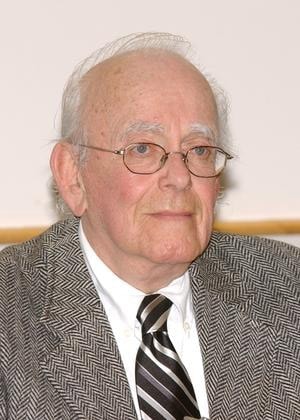 In the selectman’s defense he did announce to the room that, “What I’m about to take out is fake,” but, being the junta of wordsmiths that is Guns.com, we’re quick to point out that the senior politician and lawyer crying out loud could have phrased that a little better before he put the gun to his temple and told the room that his actions were the equivalent of what environmentalists are doing to the town. 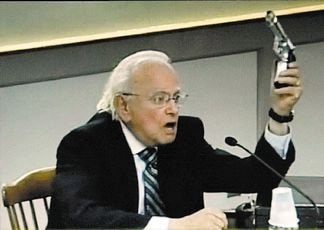 What do these “environmentalists” want?  For Yarmouth to build a sewage system.

Predictably, people bolted from the room at the sight of the very realistic looking toy gun or so reported the Cape Cod Times.

Fellow selectmen, Chairman Erik Tolley, the acting Town Administrator Peter Johnson-Staub and Police Chief Frank Frederickson all condemned the stunt dangerous and childish.  Groskopf on the other hand believes he succeeded in drawing attention to the issue. 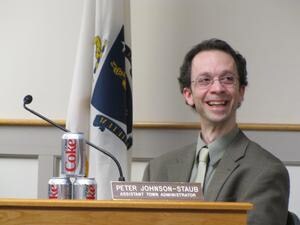 Last weekend, police arrested Wintle after he allegedly pointed a .22-caliber pistol on a man in the parking lot of a Dunk’n Donuts.  He is being charged with carrying a concealed weapon without a permit and with a felony charge of criminal threatening with a dangerous weapon. Bail conditions prohibited him from returning to the State House without express permission from House Speaker Robert Nutting. 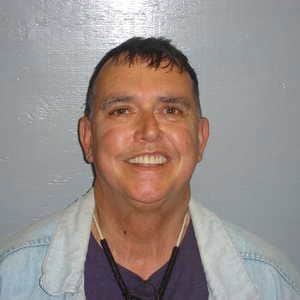 Wintle was arrested at gunpoint Michael Seamans of Sidney, a newspaper photographer for the Morning Sentinel in Waterville, outside the coffee shop on Kennedy Memorial Drive.

Earlier this week, he was transferred to a psychiatric hospital after an examination by authorities in Kennebec County.  The mental health assessment was initiated at the request of the officers guarding Wintle.

“This is another step in the process in evaluating the unusual events of May 21, 2011, and it is hoped that this process will shed some light on these unfortunate events,” Wintle’s attorney, Kenneth Fredette of Newport, said in a statement Friday evening. Fredette is also a Republican state lawmaker who knows Wintle personally. 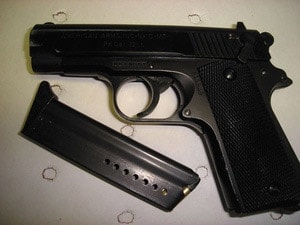 The victim here is Michael Seamans, a photo-journalist for the Morning Sentinel and innocent bystander (Seamans was not taking pictures of the Wintle at the time).

Wintle, a freshman Republican legislator elected last November’s legislative sweep, was already on Capitol Cop’s and other lawmaker’s radars well before the gun incident.  Fellow representatives had noted increasingly bizarre and erratic behavior, reporting that he would fixate obsessively on issues not germane to the topic at hand and often made strange comments—so strange in fact Capitol Police observed legislative sessions to keep an eye on him.