Smith & Wesson’s no naif when it comes to the greatest of Browning’s platforms. They’ve been in the 1911 business since the beginning of said business, and have been suppliers of 1911s to enthusiasts and law enforcement for decades. They’re about as trusted as you can be when it comes to these pistols. 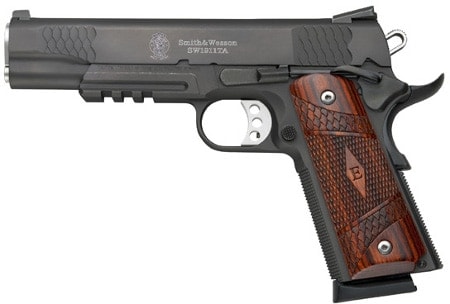 But it wouldn’t be 2011 if Smith & Wesson didn’t introduce something new for the Yot1911. Back at the last SHOT Show, they showed the world a glimpse of what they had in the pipe: the E-Series 1911. Well they’re in stores now, and sure enough, people want them. 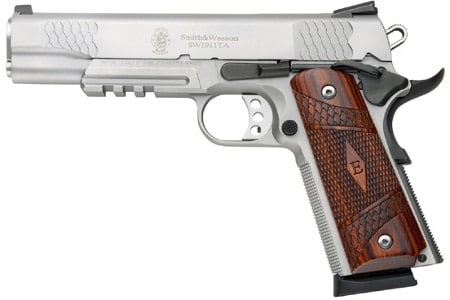 Still handfitted, the E-Series changes are slightly more than cosmetic. The first major change anyone will notice are the slide serrations, which are no longer Colt-style straight cuts through the slide. The E-Series features scaled, extra grippy serrations, which give a nice purchase without being rough. 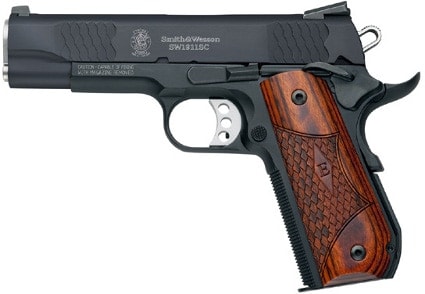 They all have tritium night sights and recessed barrel crowns, and are available in the following configurations: gov’t with rail in matte or stainless, gov’t without rail in stainless with or without Crimson Trace grips, bobtailed commander with scandium frame (29oz!) in matte or two-tone. All the guns have new half-checkered laminate wood grips (with a big “E” on them). 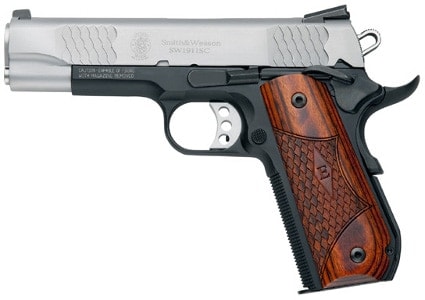 And all of E-Series pistols have enlarged, heavy-duty external extractors, which work beautifully but are unfortunately cause for a different worry: some users have reported loose extractor pins that work themselves down into the frame of the gun, subsequently locking them up. Either Smith & Wesson needs to change the design, stake the pin, or use a roll pin, or you, the user, will have to stake or Loctite the pin in place. 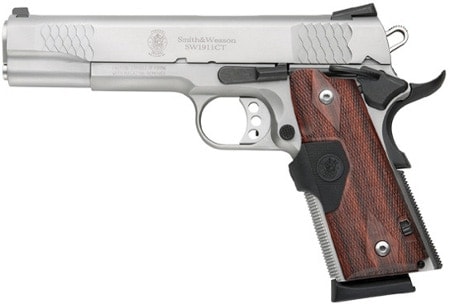 Which is a small price to pay given the E-Series’, er, small price. What these new S&W 1911s have going for them is that they’re relatively cheap. What would cost you well into the teens of benjamins from other manufacturers, Smith & Wesson is selling for a grand or less. Plus they have that Smith & Wesson taste we’ve all come to love.

Still sitting on the fence? Andrew Tuohy of Vuurwapen Blog spent some quality time with one and came away grinning, and his had that extractor pin “feature”, to boot: